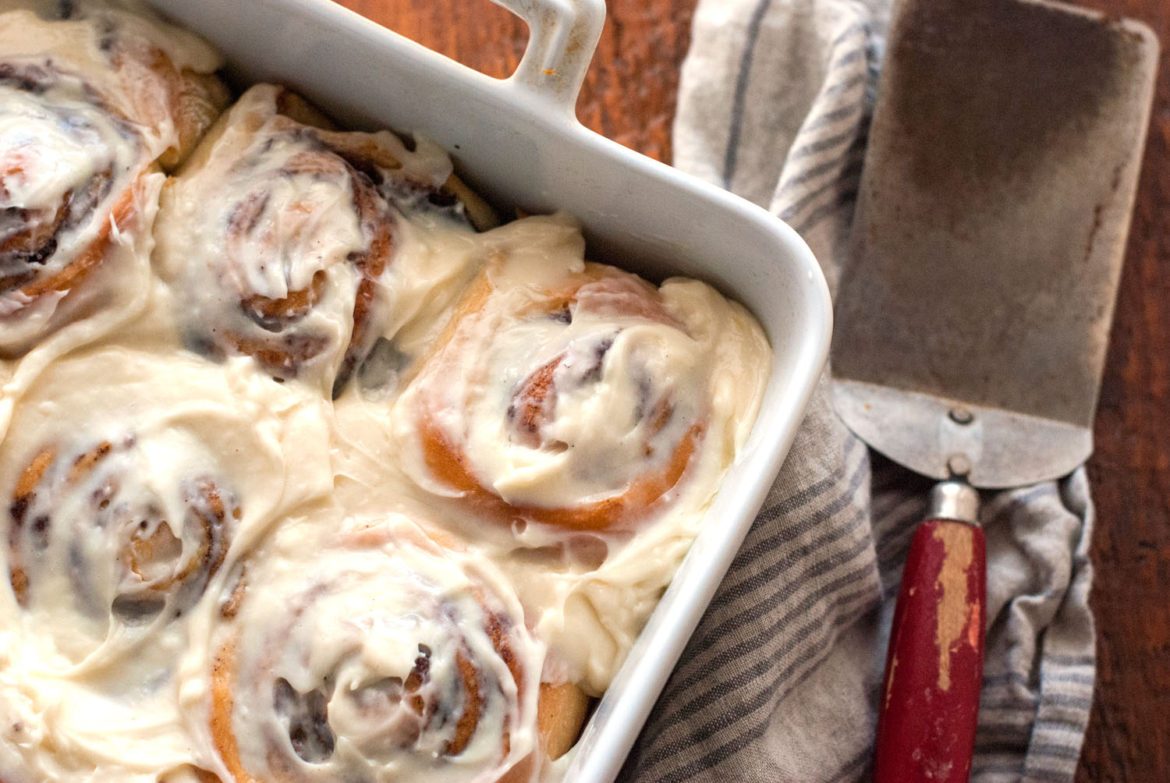 What is it about Cinnabon Cinnamon Rolls that makes them the stuff of diet busting dreams?  Is it the soft, ooey gooey centers?  Perhaps its the rich, luscious cream cheese frosting dripping seductively down the sides, or the alluring scent of cinnamon and sugar that lures you like a Siren song to the Tiffany blue booth the second you enter the mall.  Maybe it’s the thought of devouring an entire Cinnabon and feeling like you need an insulin shot and a loooong nap afterward.  And what is it about that ridiculously long line and the $5 apiece price tag that makes you sigh with regret and keep walking?

Come on. Taste the wickedness.  Make your own cinnamon rolls at home, dripping with cinnamon sugar loveliness and drowning in copious amounts of luscious cream cheese frosting.  Make 2 dozen of these little beauties for about the cost of 2 of the real thing– and you just might find yourself making the crowded trek to the mall a lot less often. 😉

in a mixing bowl (if you are using active dry yeast, make sure to allow your yeast to proof in a little bit of the warm water before adding).  Mix well.  Add flour gradually until it is almost too stiff to mix.

and knead in enough flour to form a soft dough.  Place dough in greased bowl, grease the top, and cover with plastic wrap.  Allow dough to rise until doubled in size– roughly 1.5 hours.  Punch dough down and divide into 2 dough balls.  Roll each dough ball out into a rectangle roughly 24×18 inches in size.  Cover each rolled out layer with 1/2 cup softened butter.  Mix the dark brown sugar and cinnamon together in a bowl, and use half of the mixture for each buttered rectangle.  Roll up from the end, keeping dough as tight as you can.  Finish the log and pinch the ends closed.

Divide each log into 12 pieces and place in greased, deep 13×9″ baking pans.  Slightly flatten each roll so that they all the rolls are roughly the same height.  Cover and allow to rise 30-45 minutes more until puffy and almost doubled in size.  Preheat the oven to 350 while the rolls are having their second rise, and then uncover and pop them into the preheated oven when they look almost doubled (waiting to preheat the oven may cause them to over-rise– you want it ready and hot so you can put them in at any time).  Bake for roughly 20-25 minutes, until lightly golden brown.  Rotate pans halfway through baking to ensure even browning.

To make icing, mix together softened cream cheese and butter in the bowl of a stand mixer until all the lumps are gone. Add in powdered sugar, vanilla, and heavy cream, mixing slowly and gradually increasing the speed until frosting is creamy.  Frost over cooled rolls and serve. 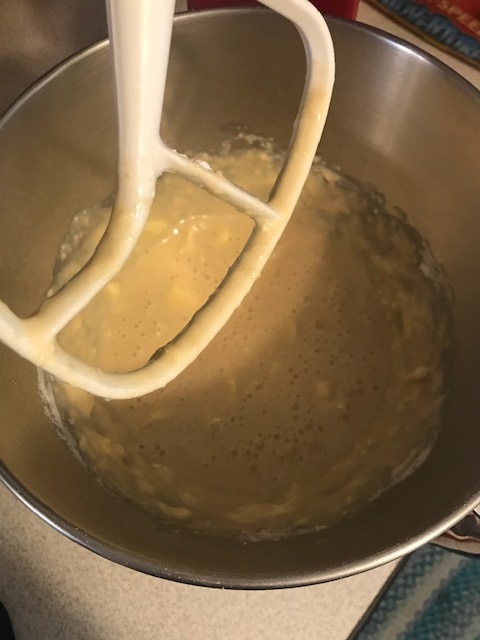 These cinnamon rolls are so easy to make that you’ll wonder how in the world you ever allowed yourself to spend 5 bucks on a single cinnamon roll at the mall.

Start out by mixing your cake mix, warm water, and SAFE gold yeast together in the bowl of your stand mixer.  So what IS instant yeast, you say?

Regular active dry yeast is the person whose alarm goes off on Monday morning.  Active dry yeast grunts, his face half buried in his pillow, and hits the snooze.  Three snoozes later, he hauls himself grudgingly out of bed, stumbles to the shower, and finally makes it to work.  That’s active dry yeast with its 10 minute proofing step.

Now picture that annoying person who leaps out of bed on Monday morning, pounds his chest and throws open the curtains saying “GOOOOOOOOOD MORNING!!!!!!!  WHAT A BEAUYOOOOOOOOOTIFUL DAY!”  Yes.  Instant yeast is like that.  He gets right out there, fresh from the freezer, and hits your dough with all he’s got, throwing in a beaming smile to boot.

Active dry yeast is slow.  Requires time to wake up.  Will get the job done, but you may have to help those rusty joints along with some warm sugar water to get him started (why is this starting to sound like me?).

.  Store it in the freezer.  Add directly to a recipe, and it will come out beaming from the cold, ready to forgive you and make your dough rise like a champ.  I far prefer instant yeast.  It gets the job done quickly, every time, no proofing step required.  And it keeps in the freezer for like, 5 years (mine never lasts that long, but it’s neat to know anyway).  SAF red

is for regular bread dough, and SAF gold yeast

is for sweet doughs (which is why I’m using it here).  Do yourself a favor and get both red and gold– for you and your bestie baker buddies. You’ll never look back. 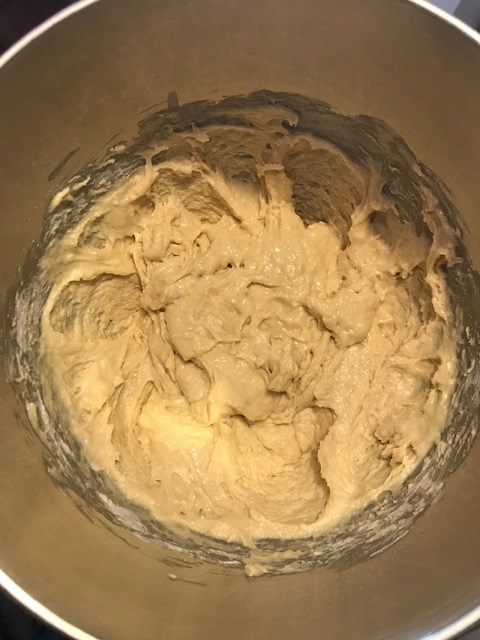 Mix in enough flour to form a dough that is just about too thick for the mixer.  You don’t want to overwork the mixer.  Stop it here, and finish adding in some flour by hand.

So glad you asked. 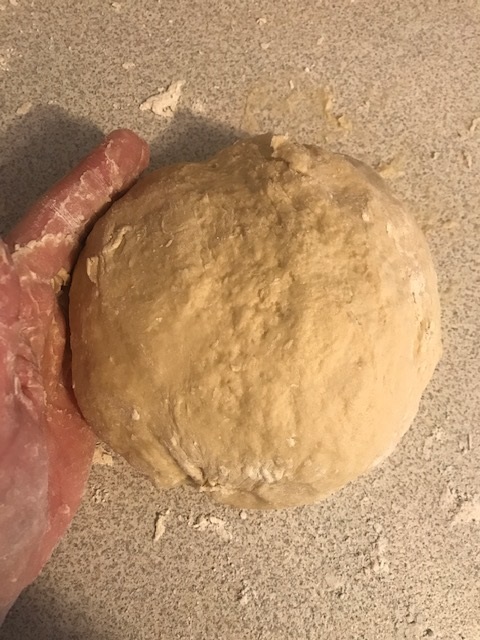 Kneading yeast dough is a neat process.  You can’t rush it.  It’s messy.  It’s soothing.  It’s the perfect cure for anger, because you get to punch and pull and beat that dough, and then it smoothly slides back into place for you to do it all again.  My great grandmother always said that when she was angry she just “had to go make bread.”  It’s quite cathartic.  “Make bread, not war.” Or something like that.

Oh.  And there’s a sweet treat at the end of it.  Sounds like perfect anger management therapy to me. 🙂

Did you ever notice that most bread recipes give a range of flour?  When I first started baking this range used to confuse me.  How can someone use “between 3-4 cups of flour?”  Is it 3 or 4?  Well, making bread is really more art than it is science.  I have heard perfect bread dough described as “feeling like a human earlobe.”  Kind of gross, but that’s about right.  The dough should not be overly dry.  It should slightly stick to your hands, but then come off your fingers with a gentle kiss– no sticky dough should remain behind.  Soft, supple, and slightly tacky– when you have that combination, quit adding flour.  If you knead your dough on a silpat

it makes the kneading surface nonstick enough that you don’t have to add copious amounts of flour to keep it from sticking to the countertop, which helps you to avoid adding too much.

Basically, to make perfect yeast dough you need to get to know how a “good” dough feels.  I don’t even measure anymore.  I do it all by feel.  I just know when my dough feels right.  Of course, copious amounts of homemade bread, cinnamon rolls, hot cross buns . . . you name it . . . have been sacrificed on the altar of “learning a good bread dough.” I’m such a martyr.  What can I say.  Hem, hemmm. 😉 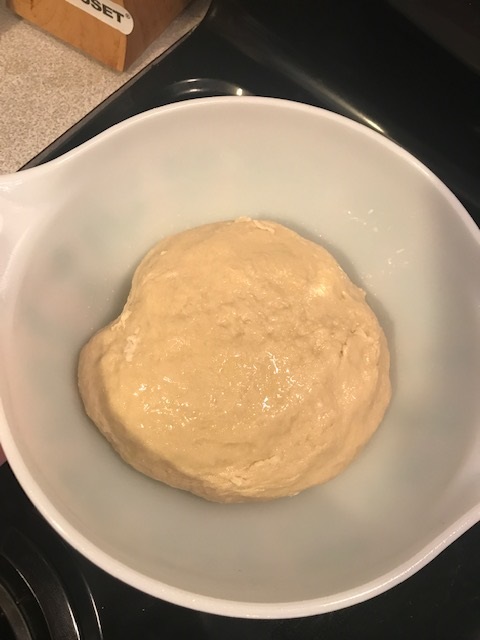 When your dough is perfectly tacky without being sticky or too dry, place it in a greased glass bowl and mist the top with cooking spray.  (“But why that great big bowl?  It looks lonely!  Get a smaller bowl so it won’t get cold . . .”) 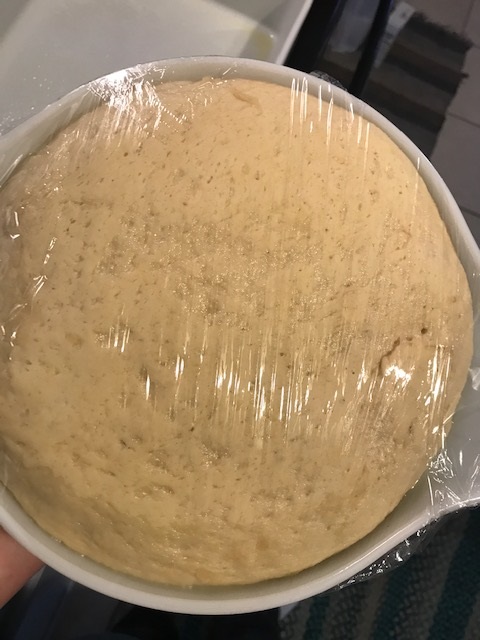 Don’t worry.  Like most children, this baby will GROWWW!!!

I like to cover the top of my bowl with plastic wrap (misted with cooking spray so it won’t stick to the dough when the dough hits the top) to seal in the moisture while it rises.  After about 1.5 hours it should have doubled in size and be nice and puffy.  On a hot day it might not take quite as long to double, so keep an eye on it.  When this baby is doubled, it’s ready. 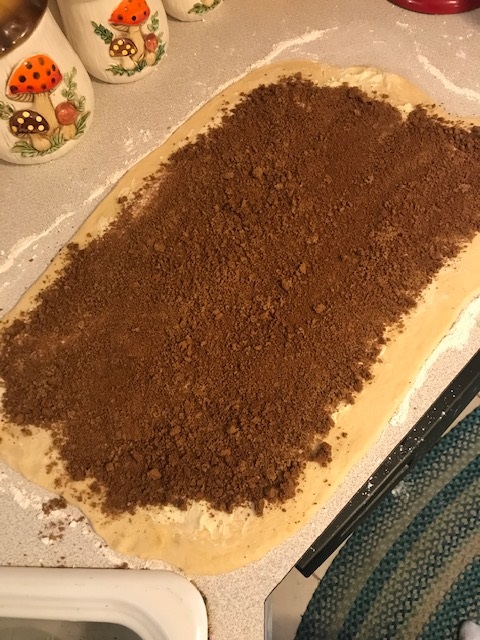 Divide your dough into 2 balls and roll out 2 rectangles.  Smear each rectangle with 1/2 cup of soft butter or margarine (country crock is one I often use, because it’s already soft. Don’t tell the butter police).  Sprinkle with your brown sugar/cinnamon mixture. You have 2 dough balls, so use half the cinnamon sugar on each “log.” 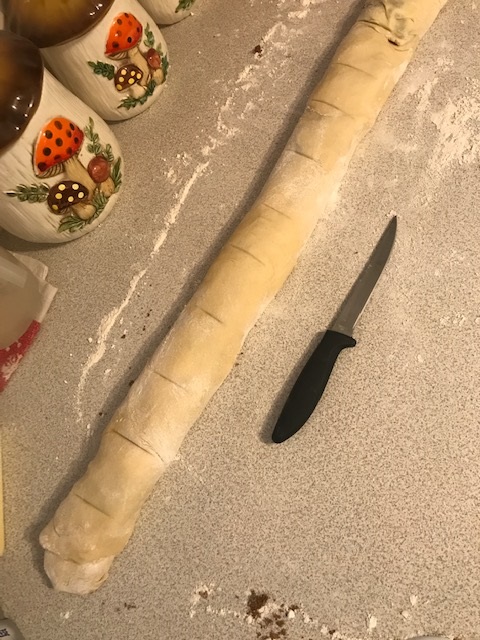 Starting at the end closest to you, roll up your cinnamon log, being careful to pull it tight as you go. Crimp the edge and roll under the ends.  Score 12 marks with the dull end of a knife, dividing in half again and again to get the pieces fairly even.  Don’t worry if your dough isn’t perfect.  Trust me. When it is wallowing in cream cheese frosting, no one will be noticing anything but how fabulous these are. 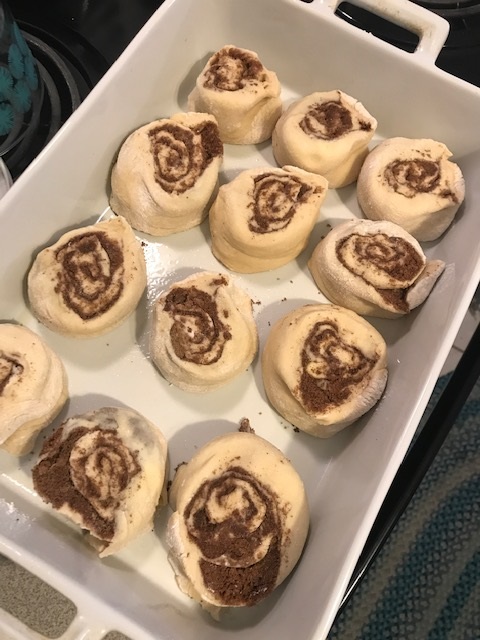 Place 12 rolls each into two deep 13×9″ baking dishes that have been misted with cooking spray.  The deep ones really give the rolls room to grow, as well as providing valuable real estate for tons of icing later.  You’ll thank me when they’re done.

Cover the rolls with plastic wrap overtop of the pan, and allow both pans to rise in a warm place for about 45 minutes more, until they are puffy and almost touching.  During this time preheat your oven to 350 degrees.  FYI, sitting on top of the oven (not the venting burner or in the actual oven) while the oven is preheating is a nice toasty place for these guys to rise. 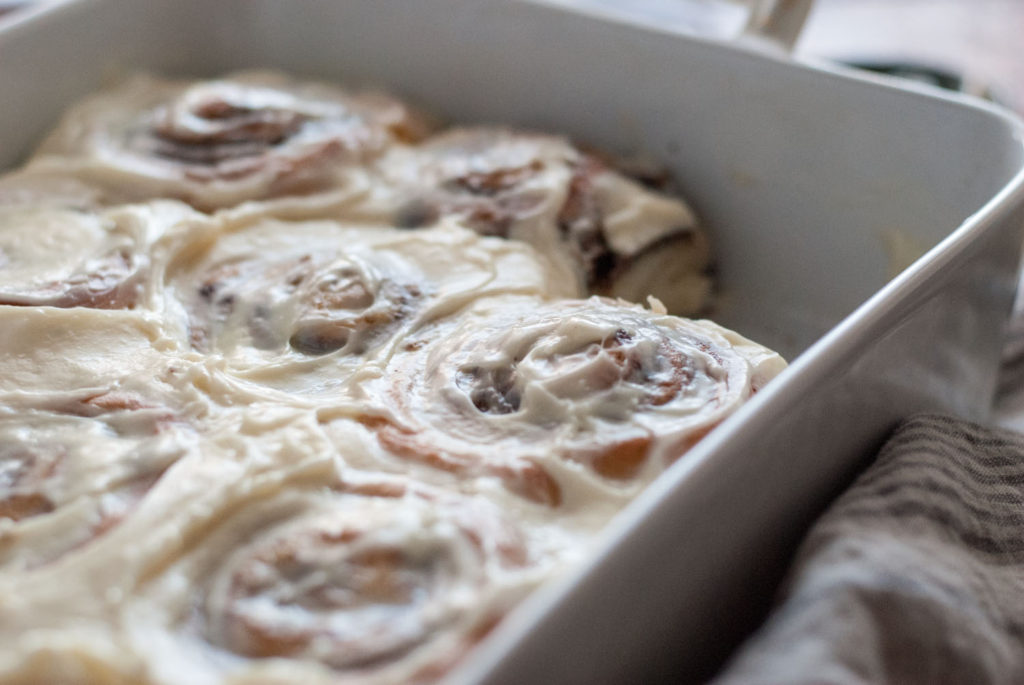 I like to bake my rolls for 25 or so minutes, until they have just the *faintest* hint of golden brown blush.  Some people prefer them slightly pale and underdone so that they are still super soft and squishy.  It’s up to you.  I do recommend rotating your pans halfway through baking (and switching top and bottom rack locations at the same time) to make sure they brown evenly. 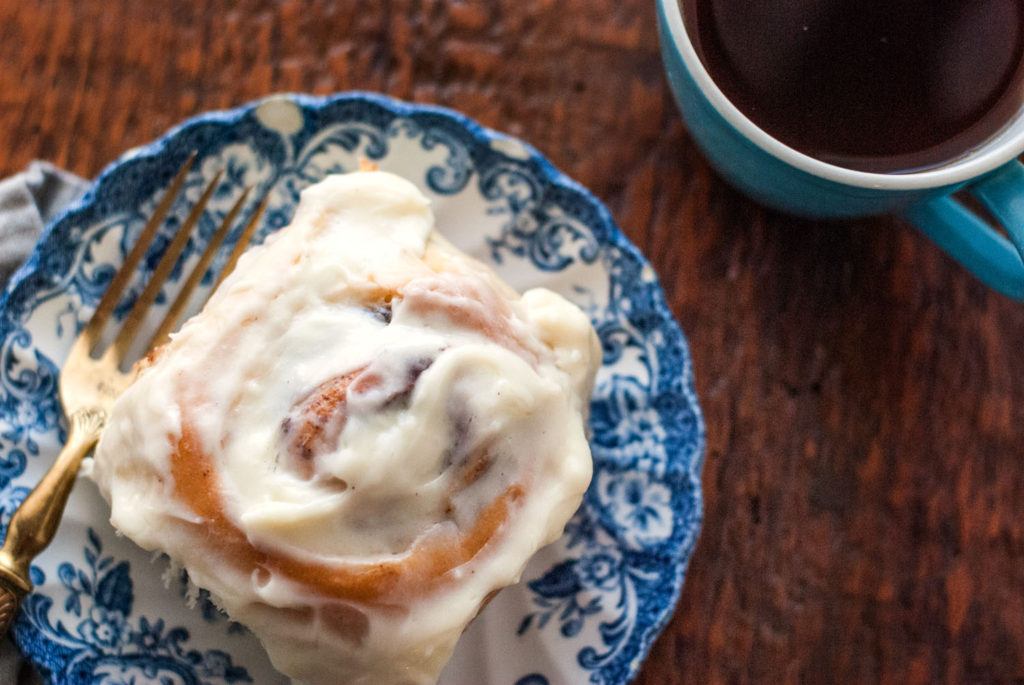 When they come out of the oven, you have two choices– the good option, and the evil option.  You can be a good little girl and let them cool, completely, before placing a dainty little amount of cream cheese frosting on top. You can then nibble a dainty bite, and have dainty tea with dainty friends.  Yes.  This is acceptable, dainty, ladylike behavior. 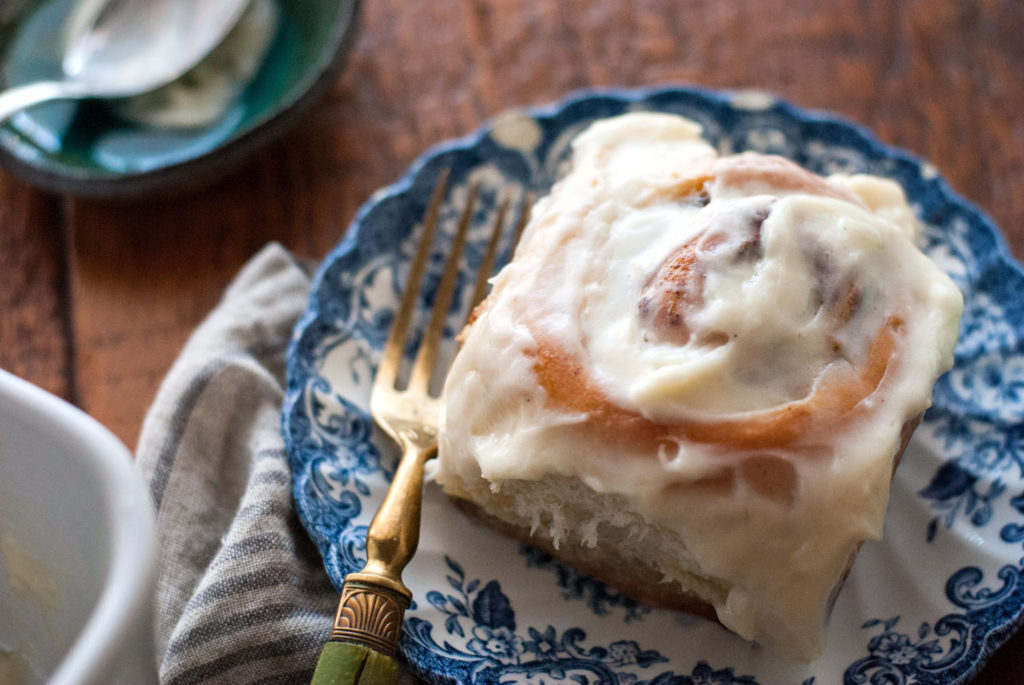 The second option is that, the second those rolls come out of the oven, you are on them like a college senior looking for his final exam results.  You dump loads of gorgeous, luscious, cream cheese frosting all over them.  It melts with oozing, gooey loveliness into every crack and crevice in a marriage of cinnamon sugar bliss.  You see heaven right before your eyes.  You gouge out one– maybe two, without even cutting them.  Who’s counting???  And you cut into it with your fork, the roll still steaming while the cream cheese melts seductively down the sides.  You take a sip of dark, nutty coffee and swirl it around with the sweetness in your mouth.  You close your eyes and decide . . . 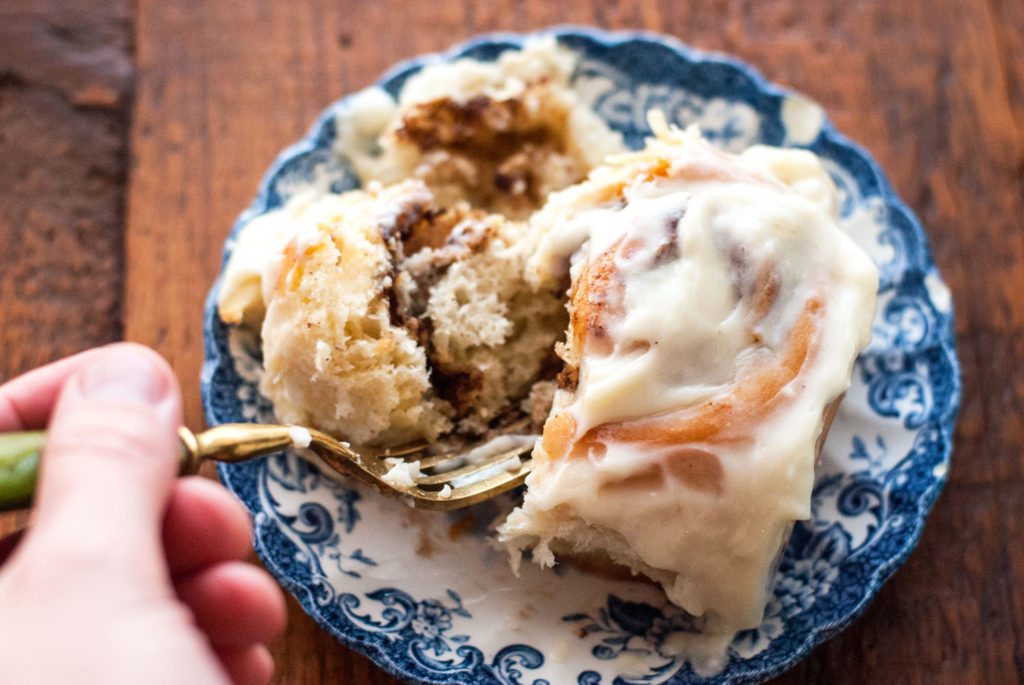 Wicked is definitely the way to go.