We Got The Tea 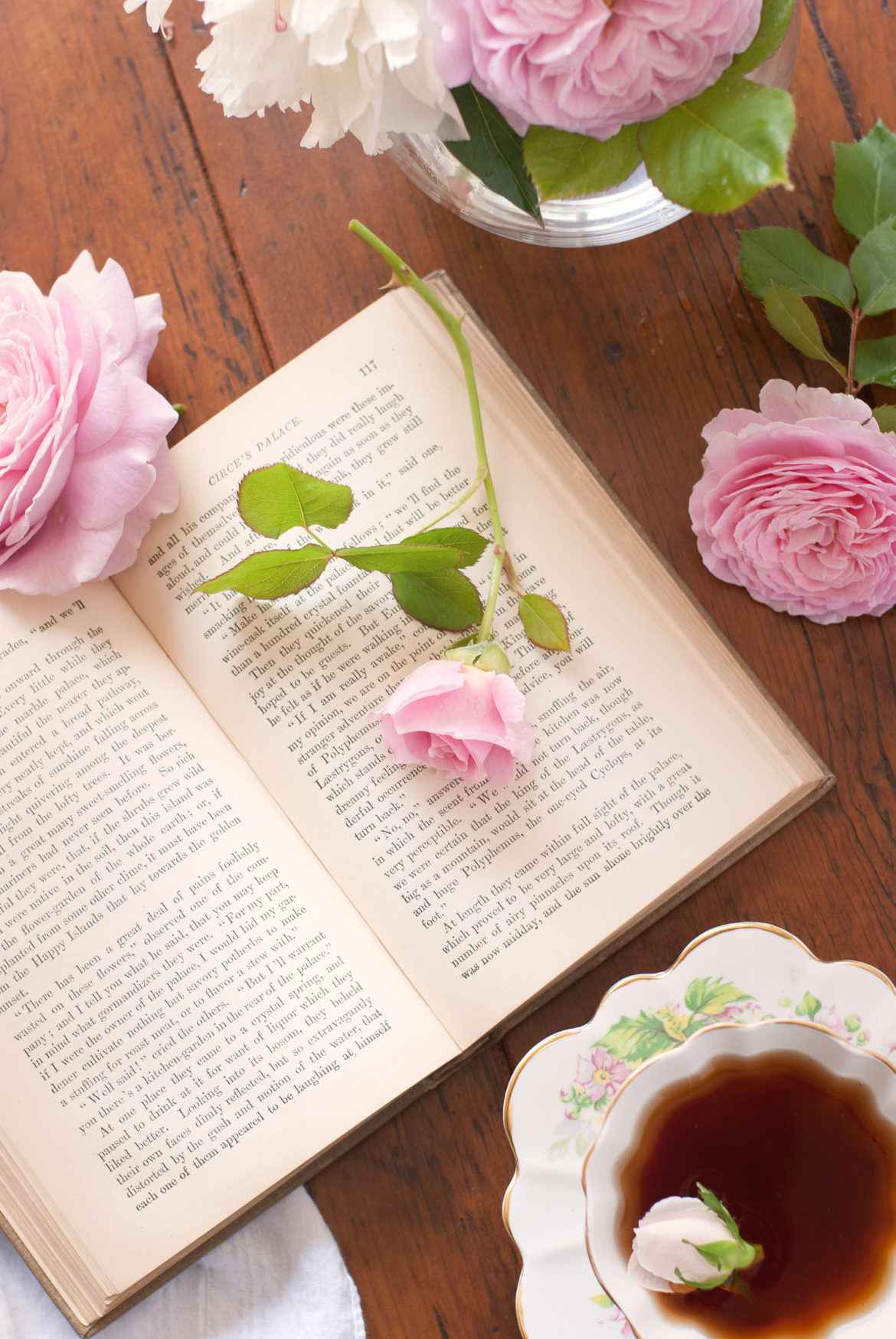 We Got The Tea

Once two strangers climbed on rocky top,
Lookin’ for a moonshine still.
Strangers ain’t come back from rocky top,
Guess they never will.

All that I ever needed to learn about tea, I learned in the South.

I arrived in South Carolina for college, fresh from the Northern bliss of Pennsylvania– where winters were long and cold, and people were quiet and hard working.  We never hugged unless someone died or got married, and then awkwardly.  It was a quiet, reserved, existence. 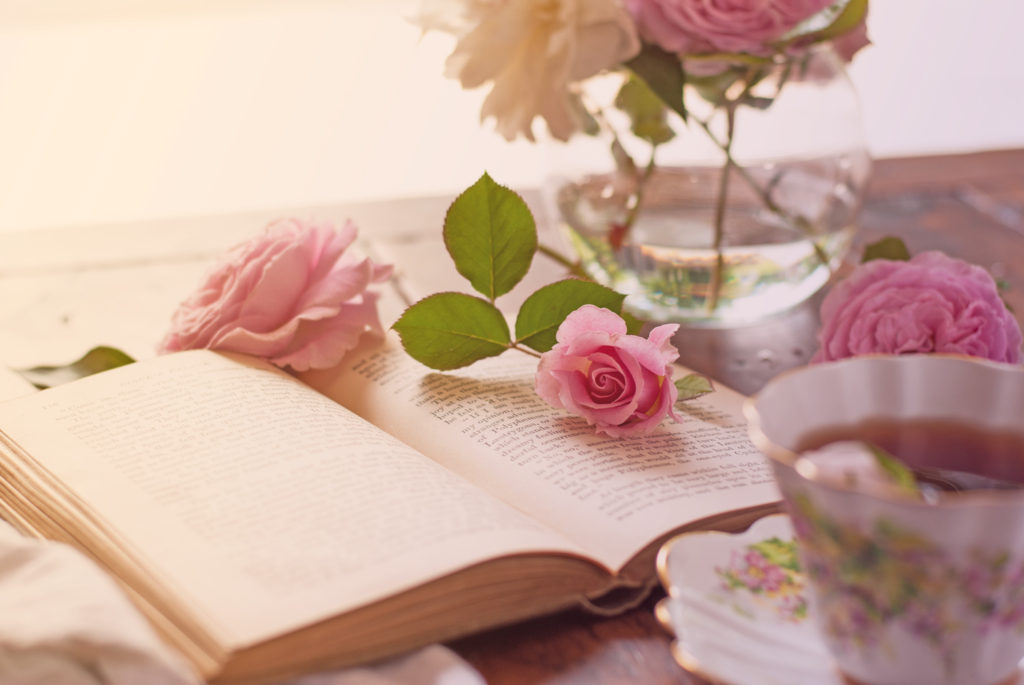 My introduction to the South was like entering a whole new world.  I struggled to understand as a woman asked me if I wanted “sprat” (Sprite), people I had never met called me darling (darlin’), and perfect strangers embraced me like an old friend.  I learned that “pig roasts” really are what they say– head and feet and tail and all– and that the tea is a different animal than anything I had ever had.

I had never liked “iced tea.”  When someone requested this drink (very occasionally) at the restaurant where I worked through high school and college, it was always unsweetened– a bitter, honey colored drink with a bitter lash of lemon.  The canned and bottled varieties were even worse.  I actually physically shuddered when forced to drink it.  Once, at a friend’s house where only “iced tea” was served, I contented myself sucking on the ice cubes, rather than subjecting myself to the evil beverage. 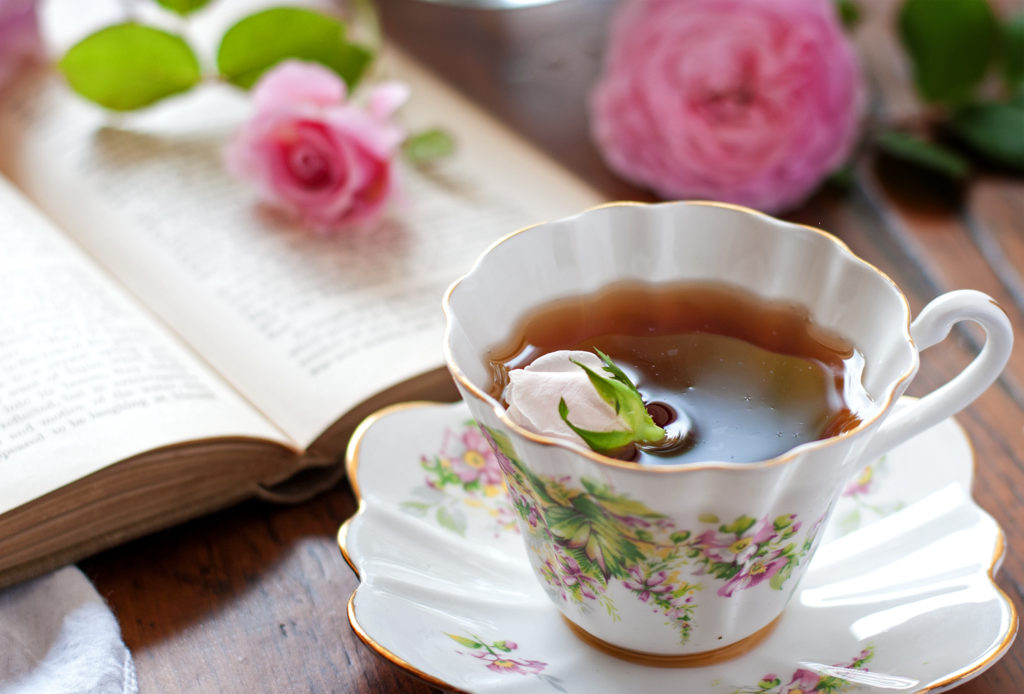 I had not been long in the South, this strange, alien world, until someone offered me some “tay” (tea).  I stared at the glass.  It seemed to grin at me, daring me to take a sip.  Everyone was drinking it.  It seemed to be the national beverage of the region.  Most people were never far from their “tea jug” or without an extra large restaurant to go cup in their hands.  I was surprised stores didn’t offer IVs so that people could keep it flowing through their bloodstreams at all times.

Bracing myself, I closed my eyes, not wishing to be rude to my hosts, and took a cautious sip.

And the heavens opened.

What was this delirious, heavenly elixir?  Could this gorgeous, gleaming swan possibly be the ugly duckling that I had so long despised?  It was smooth as silk, seeming to almost glide down my throat.  It was sweet and layered in flavor– with depth that only freshly brewed tea can bring.  I forgot my canned tea days, and I became a believer. 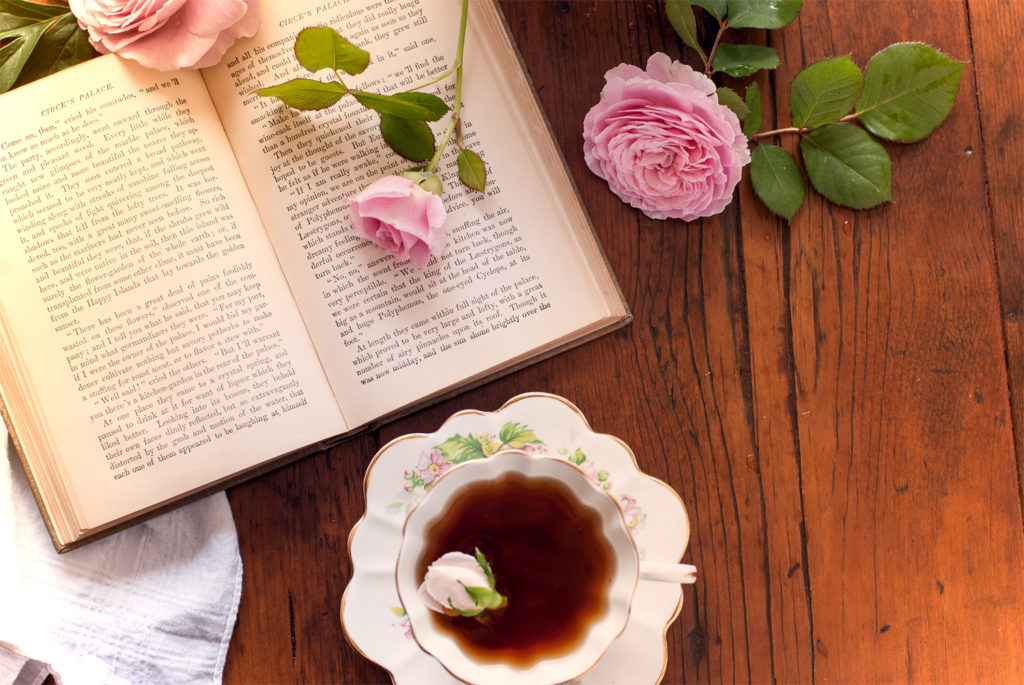 I had tea in every house, in every meeting, in every way.  We had it iced, hot, herbal, flavored, and even lukewarm.  Having never been a tea drinker, I was amazed how quickly this sultry seductress lured me into a lifelong romance.

I started to realize that tea was more than just a beverage, here.  It was tradition, family, and hospitality.  When you visit a Southern home, you are always offered tea.  Sometimes it will be sipped around a welcoming kitchen table, laughing and joking with friends.  Sometimes it will be poured liberally into frosty glasses outside as someone mans the BBQ grill and the kids blow massive bubbles in the yard.  Sometimes it will be enjoyed on a generous front porch, in comfortable rocking chairs, watching cars go by as the breeze lazily twirls the American flag hanging from the banister.  Sometimes it will be in a to go cup from Chick-fil-A.  And that’s just fine, too.

Tea is as unique as the people who make it.  Its creators range from those who add a delicate 1/2 cup of sugar, to one lady who told me that she added “about 8 cups or so per gallon.”  Some boil the sugar and water before adding the teabags, and some don’t.  Some let the tea steep all day, and some take it out after only 8 minutes.  Some add baking soda for smoothness.  Some make sun tea, letting the jar sit outside, covered, basking happily in the sunshine all day.  Some just change it up depending on what they have.  And you will quickly learn whose “tea skillz” you prefer. 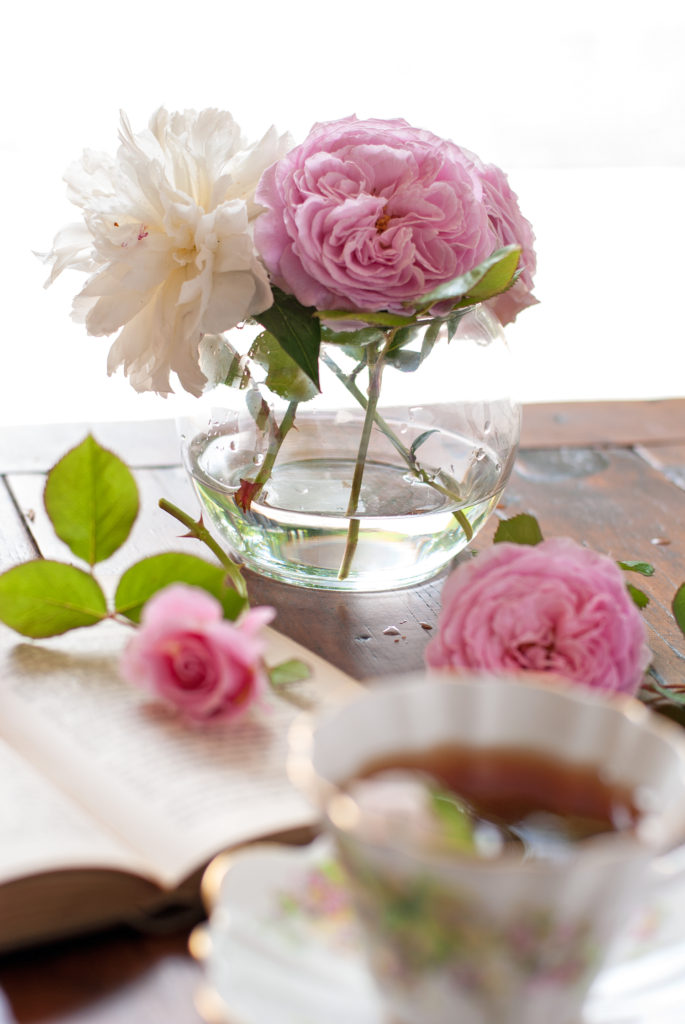 The best recipes are not always written down– sometimes they are not even measured.  Often, they are deceptively simple. They are ways of living that you learn standing next to your Grandma on a sticky summer day that is so humid it feels like all the angels just stepped out of the shower at the same time.  It is watching her slowly add the sugar and the water and the teabags.  It is standing close to her and feeling her soft, motherly housedress with its tiny flower print comfort you.  It is watching her wrinkled hands slowly stirring, as sunlight filters through the honey colored liquid.  It is a way of life.  It is preserving tradition.

I used to be so flummoxed when I would ask people for a recipe, and they would say, “Well I don’t really have one,” or “Well I kind of just add this and that until it looks right.”  I used to wonder how in the WORLD anyone could cook without directions.  Other times I used a recipe that someone else had given me, and it never turned out as well as when that person made it.  What IS that magic ingredient that all grandmothers seem to have innately in their fingertips?  What is that fairy dust that they sprinkle over everything they make, that somehow just makes it taste better?  And when will I receive my “duster fingertips” for myself?

I think life, like tea, is never the same for any two people.  We might have grown up in the rolling hills of Pennsylvania– cooking with wild game and brook trout and vegetables from the garden.  We might be from the South, where the moisture-soaked air causes even the Spanish moss to droop in stately clumps from the trees.  We might be from the Southwest, where the bright, bold flavors of Mexico kiss our cooking like the sultry chilies that we cook with.  You can always tell when you are eating comfort food.  No matter where we are from, or even where we go, we can taste when something is made with love. 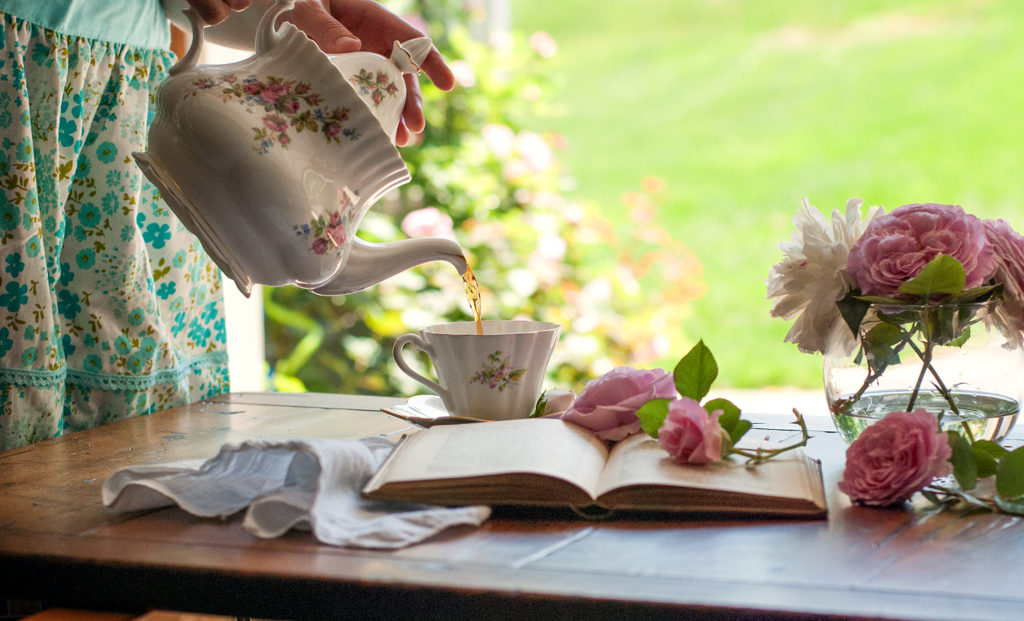 I surprised myself the other day when someone asked me for a recipe, and I realized with a chuckle that I didn’t have one.  When did that happen?  When did that start?  I very often cook without a recipe now, and I don’t remember ever beginning to do that.  It just happened, apparently, over the years.  Just like the cooks I have so long admired, like my mom and grandma, I am starting to taste something and say, “This is delicious. Is that allspice?”  “This is so good what is that herb that I taste?”  “How delicious– could you tell me how you make it?”  I’m starting to know what dough feels like in my hands, when done properly.  My fingers can understand the language of bread dough and pie crust and cake batter, when they tell me that this is enough flour.  Somehow, without my even noticing, my fingers became fluent in a language I didn’t even know existed.

Somehow, along the way, the those traditions made it from my head to my fingertips.  All those lessons that I didn’t even realize I was learning have come back to roost.  I am teaching my own kids, now– watching as they learn how to mix and add ingredients and roll out cookie dough.  I am showing them, just as others have shown me.  I am passing along that tradition.  I am teaching them where I came from.

To all the amazing cooks and beautiful, strong women who taught me along the way . . . thank you.  For you are the real treasures.