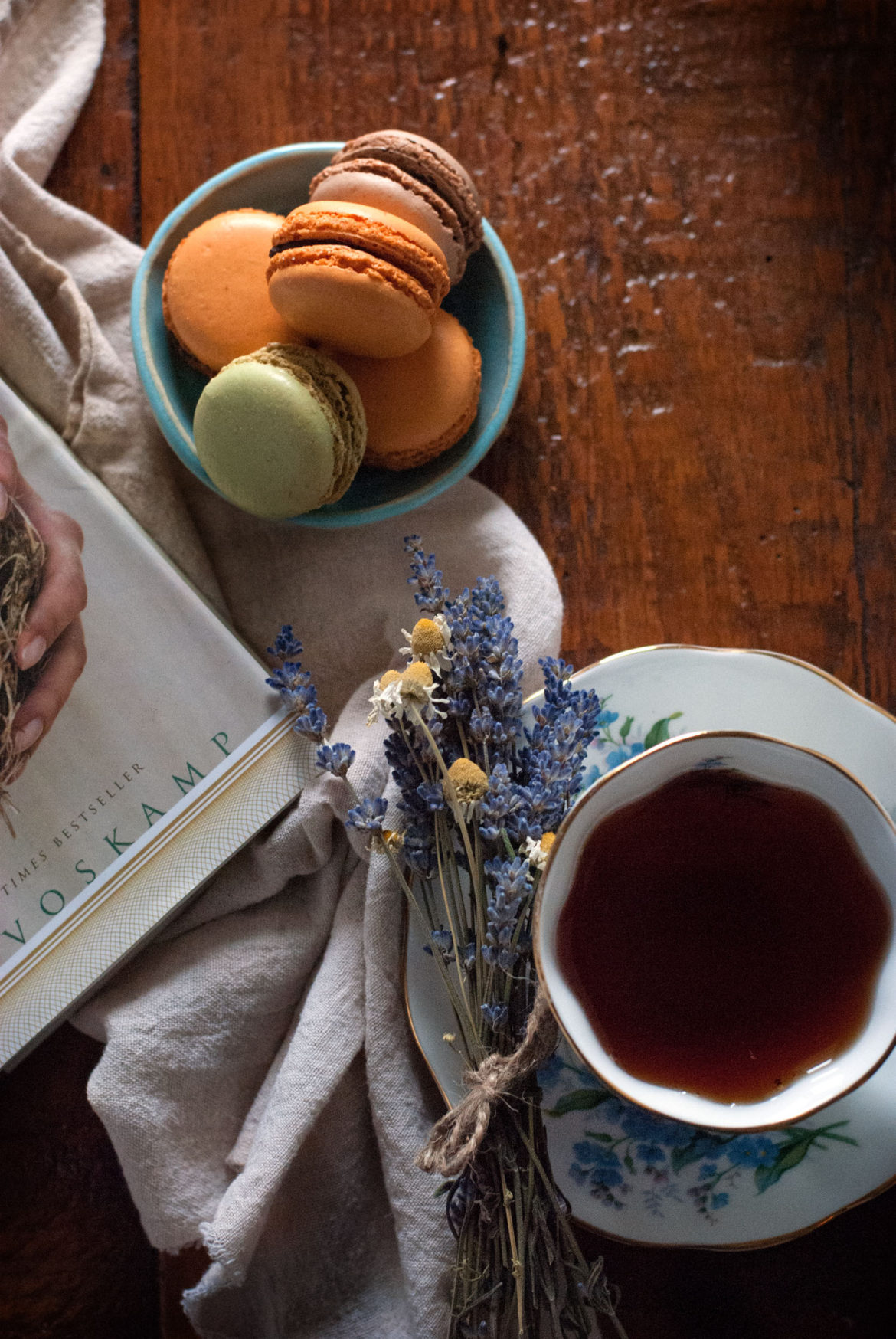 “In Ireland, you go to someone’s house, and she asks you if you want a cup of tea. You say no, thank you, you’re really just fine. She asks if you’re sure. You say of course you’re sure, really, you don’t need a thing. Except they pronounce it ting. You don’t need a ting. Well, she says then, I was going to get myself some anyway, so it would be no trouble. Ah, you say, well, if you were going to get yourself some, I wouldn’t mind a spot of tea, at that, so long as it’s no trouble and I can give you a hand in the kitchen. Then you go through the whole thing all over again until you both end up in the kitchen drinking tea and chatting.

In America, someone asks you if you want a cup of tea, you say no, and then you don’t get any tea. 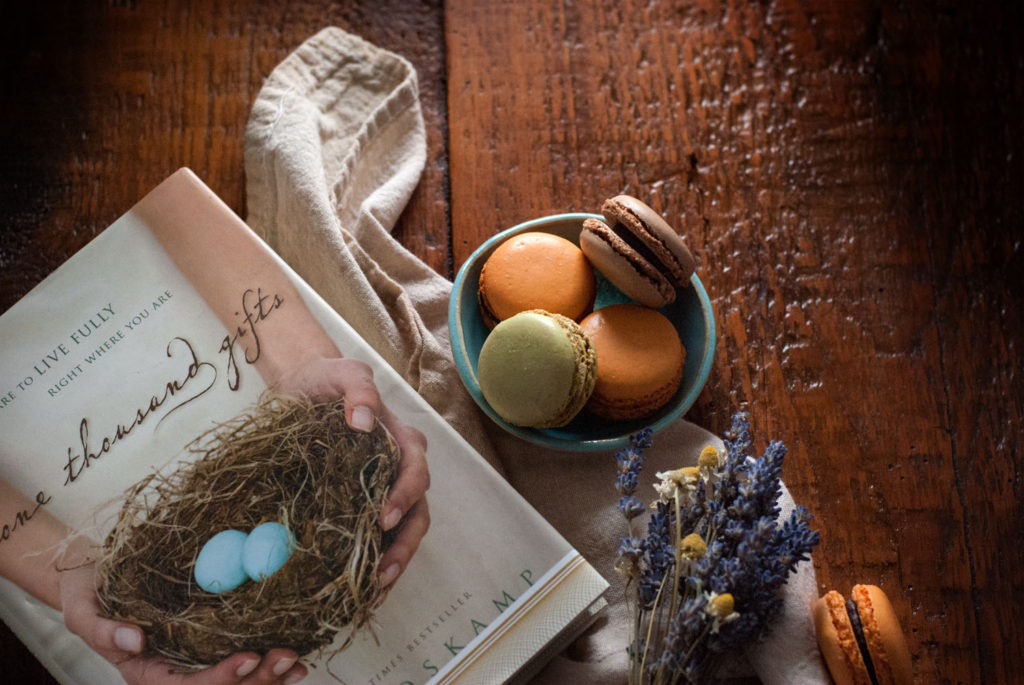 When I was a little girl, there was absolutely nothing better than a tea party.  My grandma would treat us to tea parties sometimes, if we were very good, when we visited.  They were ridiculously exciting and secret affairs.  It all started with an invitation that she would hand me with a clandestine wink when no one was looking.  “Tea party tonight at 10.”  First of all, for a kid whose bedtime was 9:00, having a secret rendezvous planned for 10:00 seemed like the most beautiful and decadent kind of wickedness. 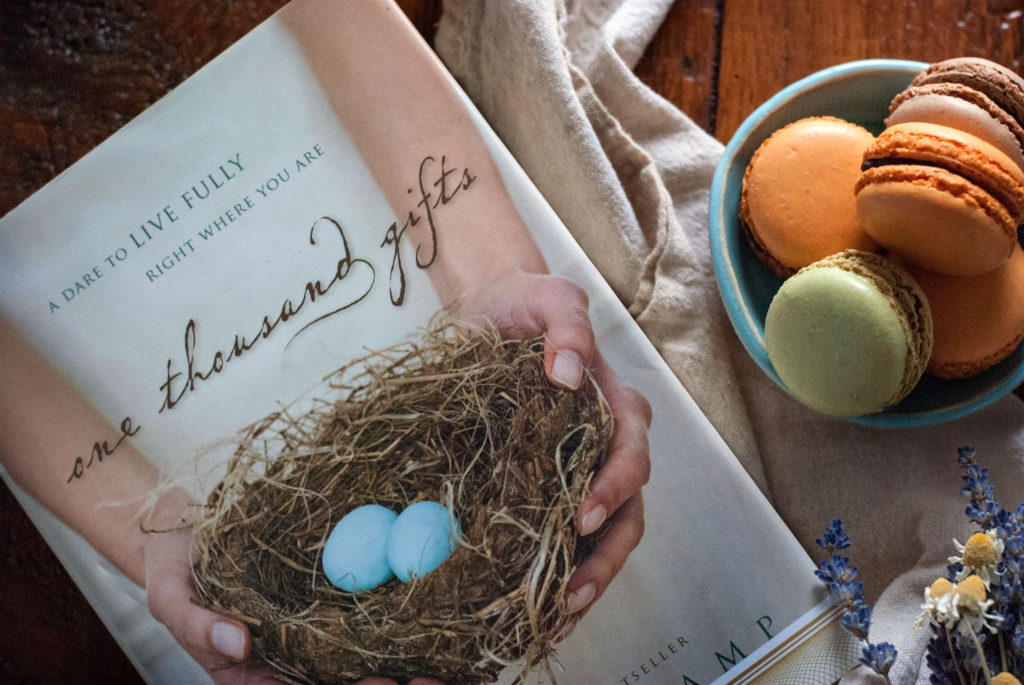 And even better was the fact that Gram would come and softly touch my shoulder at 10, while I lay there, trying desperately to stay awake, while my siblings snored on the lumpy air mattress that she pulled out when we visited– something that we kids thought was amazing (I recall fights over who got “the bubble” on our side.  haha).  She would softly whisper, “Are you awake?  Are you ready for the tea party?  Or too tired?” 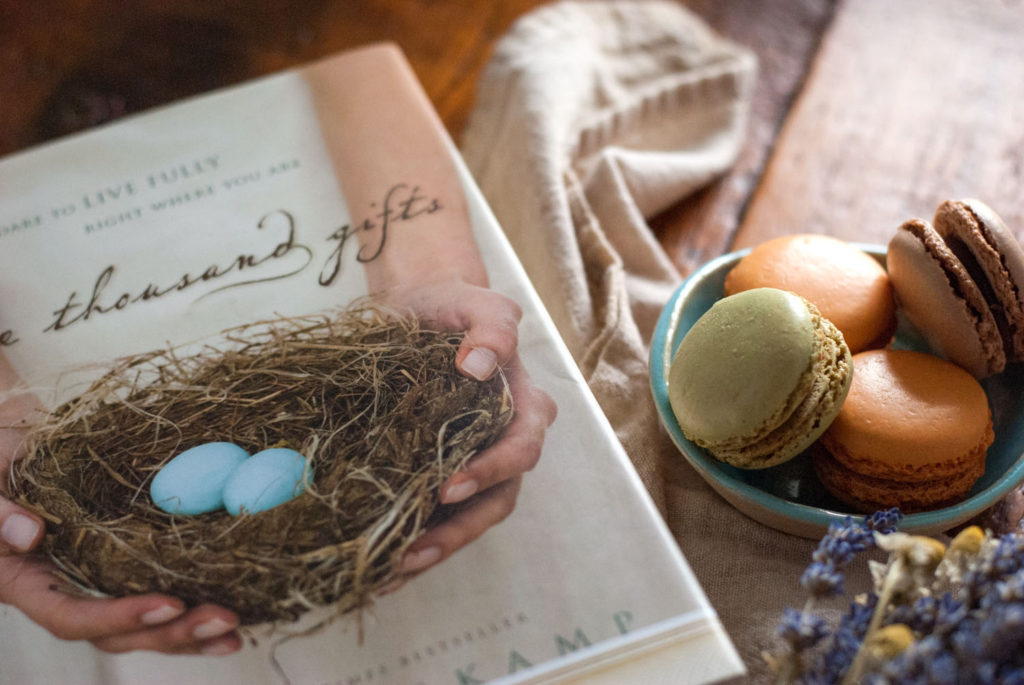 Oh my goodness. Usually I was so sleepy I could barely keep my eyes open, but there was no way I was missing that tea party.  My eyes bleary with sleep, I’d slip out of the warm bed in my nightgown, take Gram’s hand, and walk down the creaky wooden stairs to the kitchen.  The entire house was dark except for the kitchen table, which had come alive with magic and sat there, lit and set just for us. 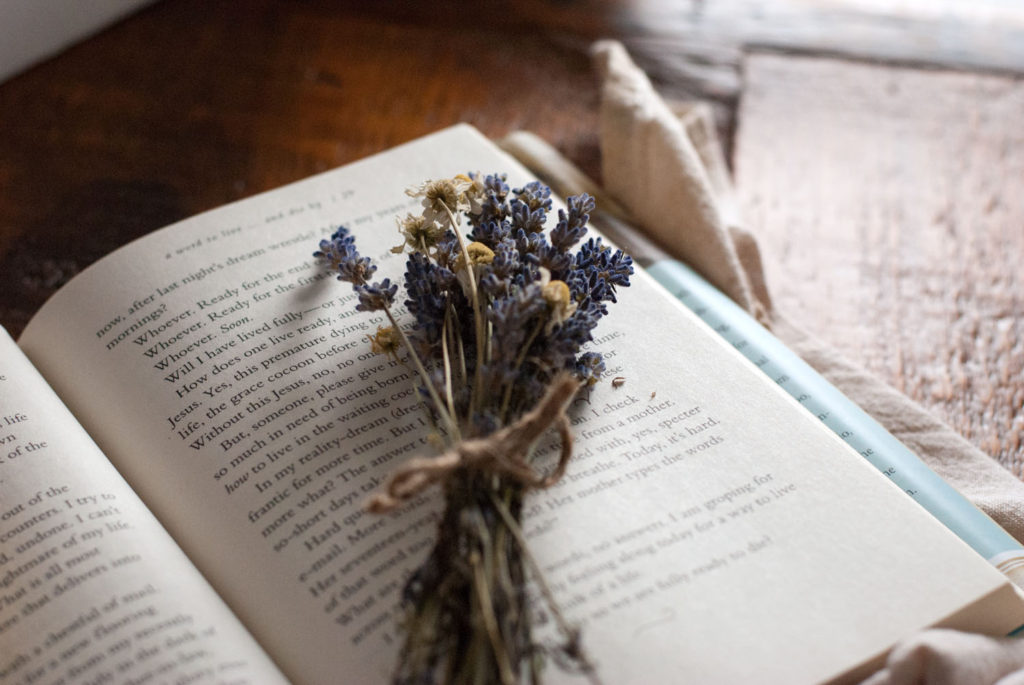 Gram would let me use her good cups and a real teakettle.  She put a teabag in her cup and hot chocolate mix in mine.  The kettle would whistle as she grabbed it, putting her finger to her lips conspiratorially, as if to say, “We can’t let anyone else wake up!  This is our tea party!”

It didn’t seem to matter that we had peanut butter toast for “teatime treats.”  When we cut them into slim toast fingers and curled our pinkies, they seemed like the very fanciest food to me.  It didn’t matter that we were wearing PJs and sitting around an old kitchen table covered in a wrinkled oilcloth with brown flowers on it.  In fact, it didn’t even really seem to matter that it wasn’t tea we were drinking.  Those tea parties were like being gifted with an extra Christmas. 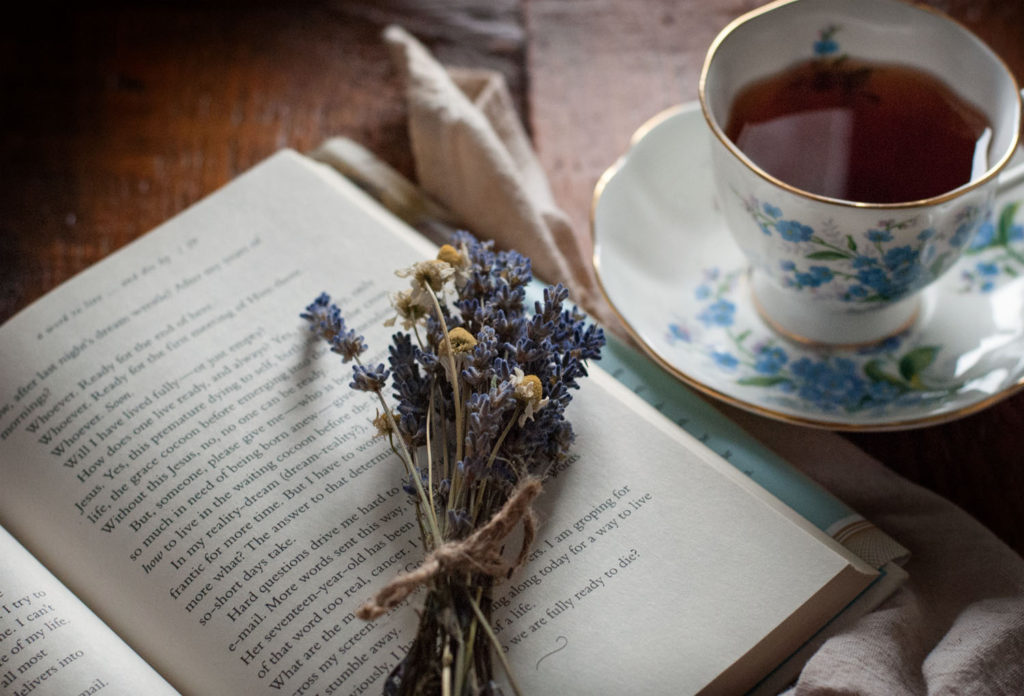 It’s funny– I can remember every minute of those tea parties even today, years later.  I remember dipping my peanut butter toast into my hot chocolate and Gram saying, “See?  It tastes just like a Reese’s cup.”  I remember the steam curling from my cup and the foam that stuck to the handle of the spoon when I stirred.  I remember smiling with a marshmallow mustache and laughing, there in the kitchen with Gram– one of the few times where it was just me and her without everyone else around. 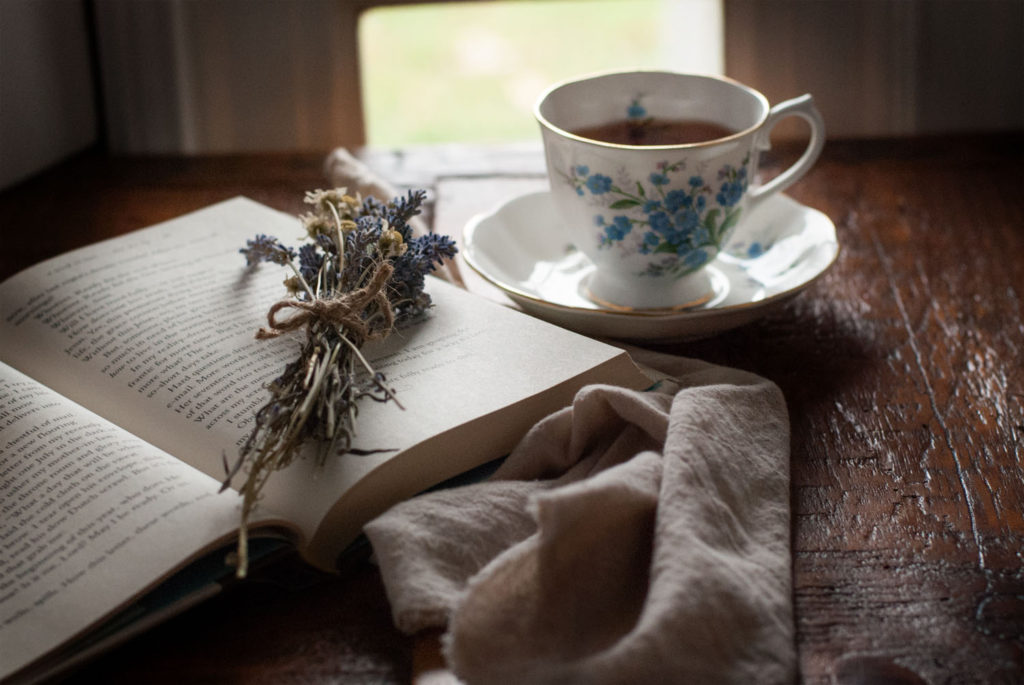 My grandma was never much for talking.  She was (and is) always a hard worker whose hands were never busy, from the time she woke up in the morning and started making a hot breakfast before it was light, to the evening when she would sew buttons back on shirts and patches on the knees of jeans while she watched Jeopardy! and Wheel of Fortune.  Even during meals she was constantly up and down, bringing extra bread to the table, refilling the old aluminum water tumblers, and cutting pieces of homemade pie for dessert.  She was a child of the Depression who believed that nothing, even the smallest scrap, should ever be wasted.  Clothing was patched and patched until it was unusable.  Then the buttons were cut off and saved in the “button box,” while the scraps were turned into pieces for a quilt or rags for washing the floor until it gleamed.

It seemed that she even rationed her words.  She didn’t talk much at all, but we knew that she loved us.  It wasn’t a hugs and kisses kind of love– it was shown in other ways– quieter ways.  She showed it through making our favorite meal when we visited or by breaking her rule of “no food in the living room” when she pretend not to see us edge slowly into the brown carpeted room so we could watch Flipper the Dolphin on Saturday evenings. 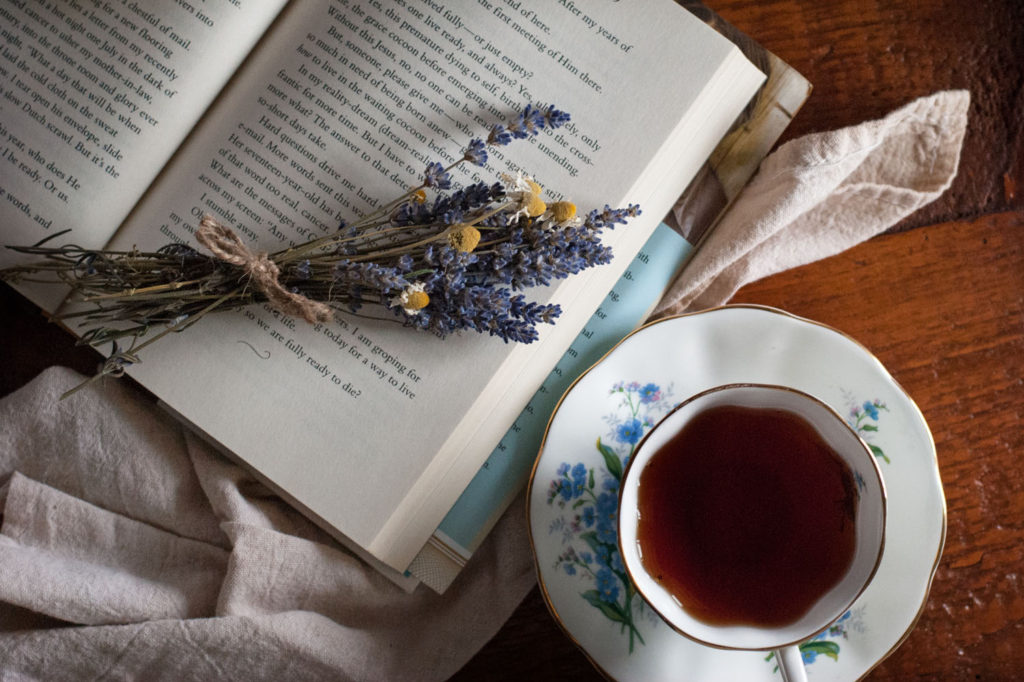 The tea parties were special.  Not only did I get to see my grandmother without all the cares and busyness of the day, but I got to see her smiling and spending time just with me, without any of the work that so often stole her away.  I got to see her laugh.  I got to see that rare, playful side of her, which only ever cautiously came out at night, like the moon peeking over the mountains on a cool summer evening.  The beauty was rare.  Quiet.  Breathtaking. 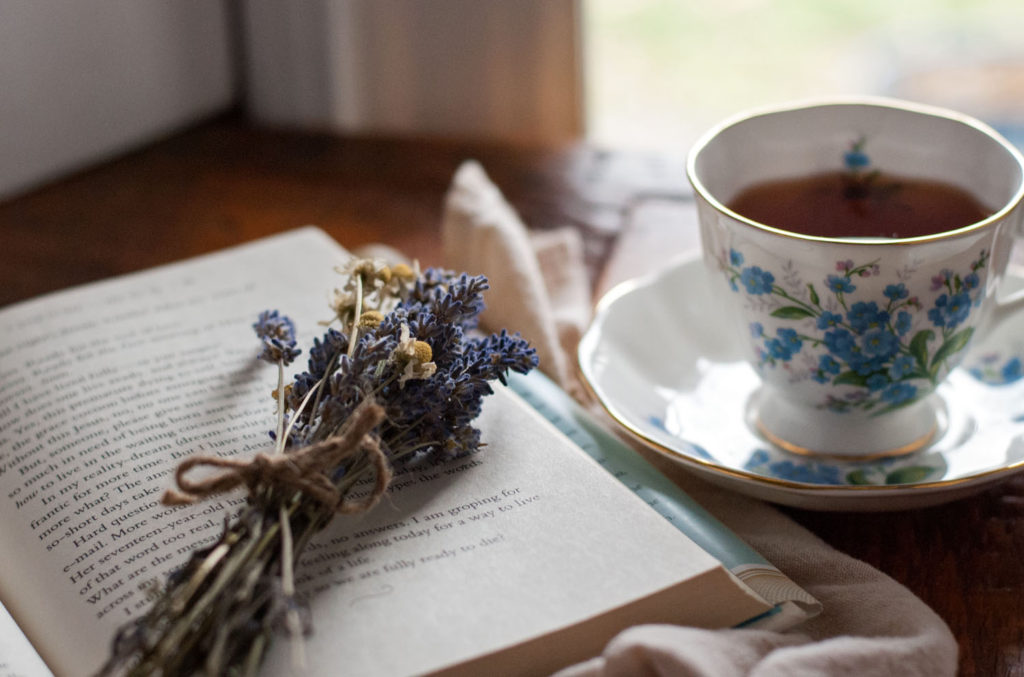 Teatime is such a traditionally calming ritual.  On my dream trip to England, I loved taking a break in the middle of the afternoon (or anytime, really), and breathing in the scent of tea leaves steeping in steaming, merrily bubbling water.  A little sugary treat and the warm glow of whatever tea we selected would rejuvenate us from the inside out when those “afternoon sleepies” set in. 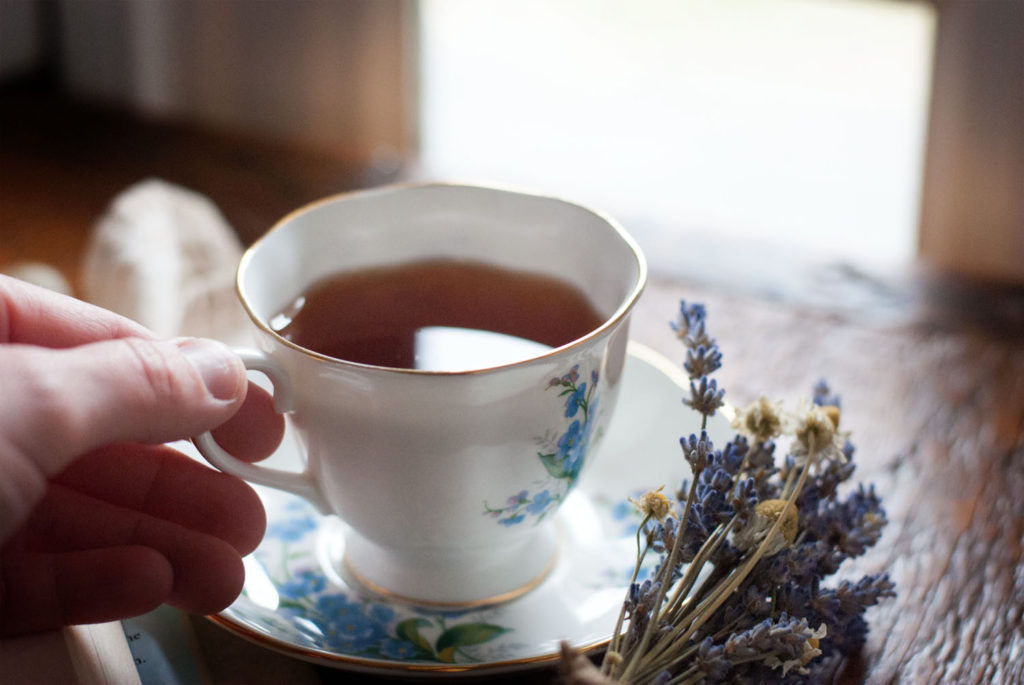 Recently my friend Jacqui’s daughter had a birthday tea party.  The little girls all sipped from real china teacups and daintily curled their pinkies while they, too, sipped on hot chocolate and laughed at each others’ marshmallow mustaches.  Jacqui managed to find paper plates that looked like real china.  Each tiny guest received a long faux pearl necklace.  There were flowers and tiered trays with petite little treats.  And best of all?  The room had that special feeling of magic, just like I remembered from all those years ago. 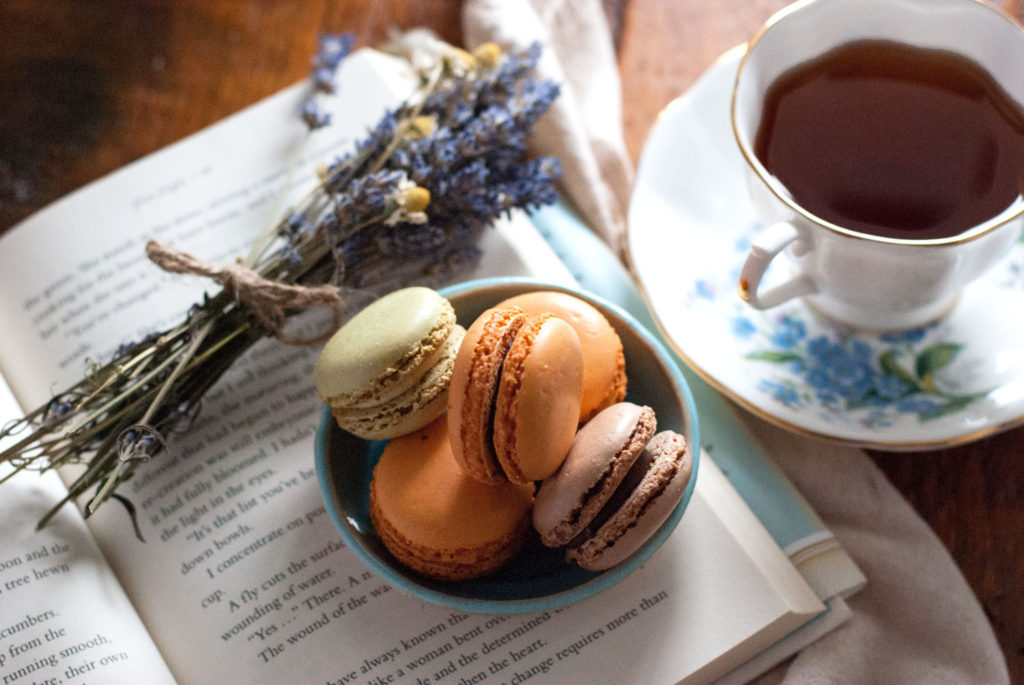 Tea and a good book.  The rain drizzling on the roof.  Good friends and laughter.  The remnants of a little girls’ tea party.  Marshmallow mustaches all around.