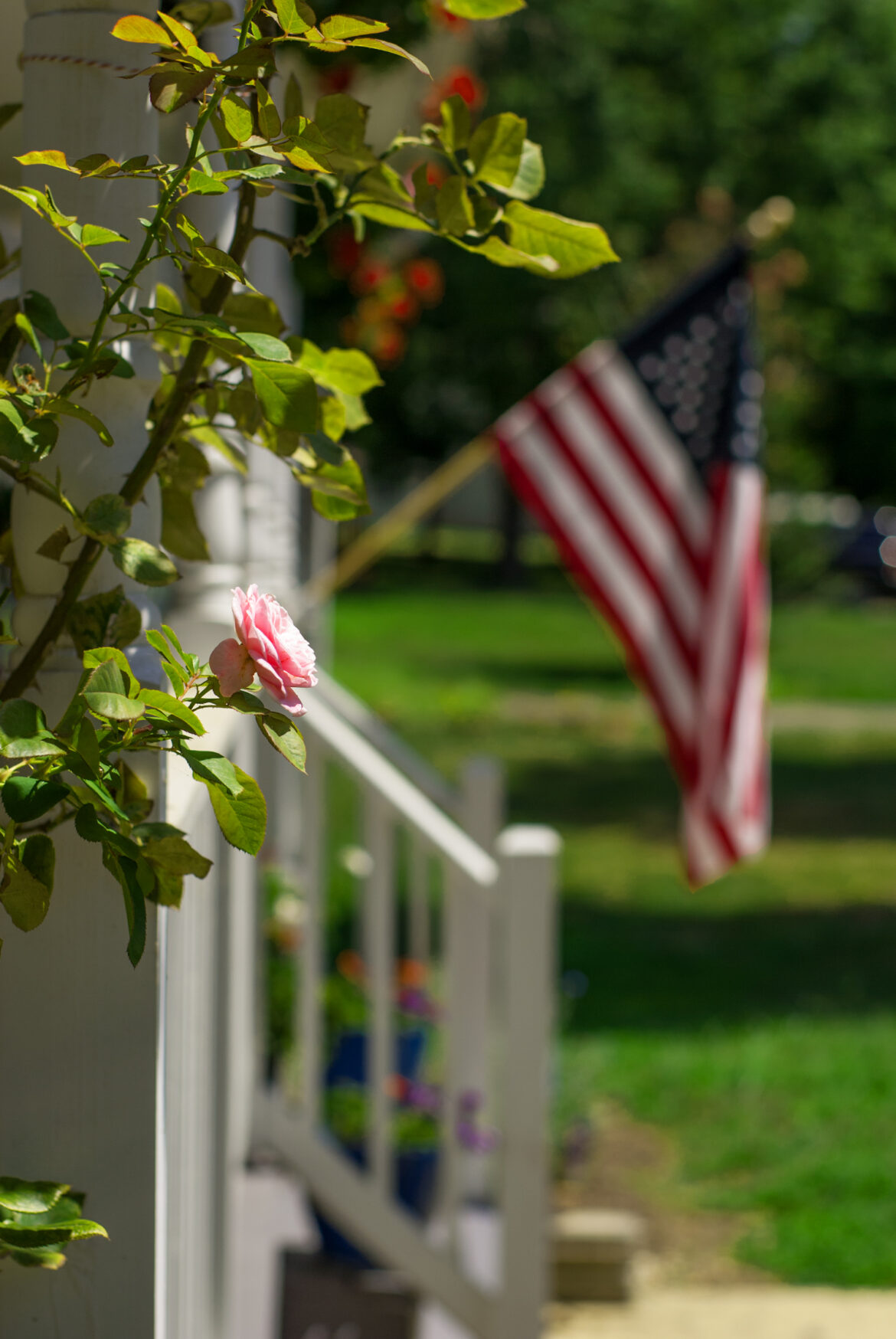 You can learn a lot about life sitting on the porch. 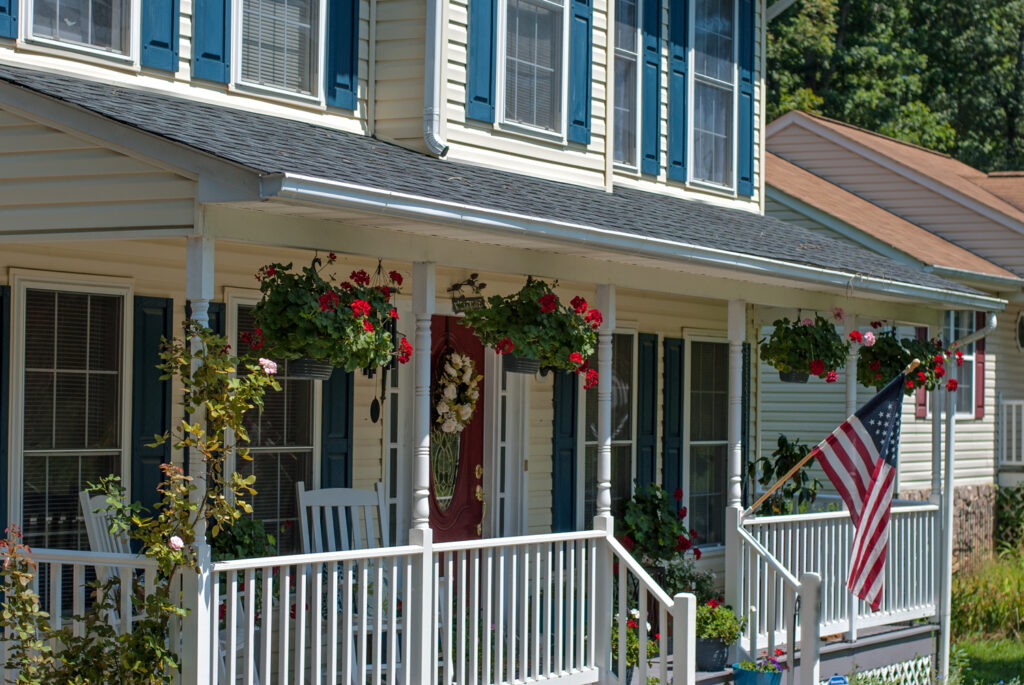 There was a time, not so very long ago, when people didn’t have air conditioning.  The porch became a respite from the sweltering stuffiness of the inside during scorching summers where clothes hung limp on the line and we prayed for a breeze– just a breath of air to stir them to life.  Dogs lay, panting heavily, wherever they could find shade.  Gram brought her work out onto the porch– and we would sit there shelling peas, snapping green beans, or peeling peaches, just to avoid going back into the sweating kitchen. 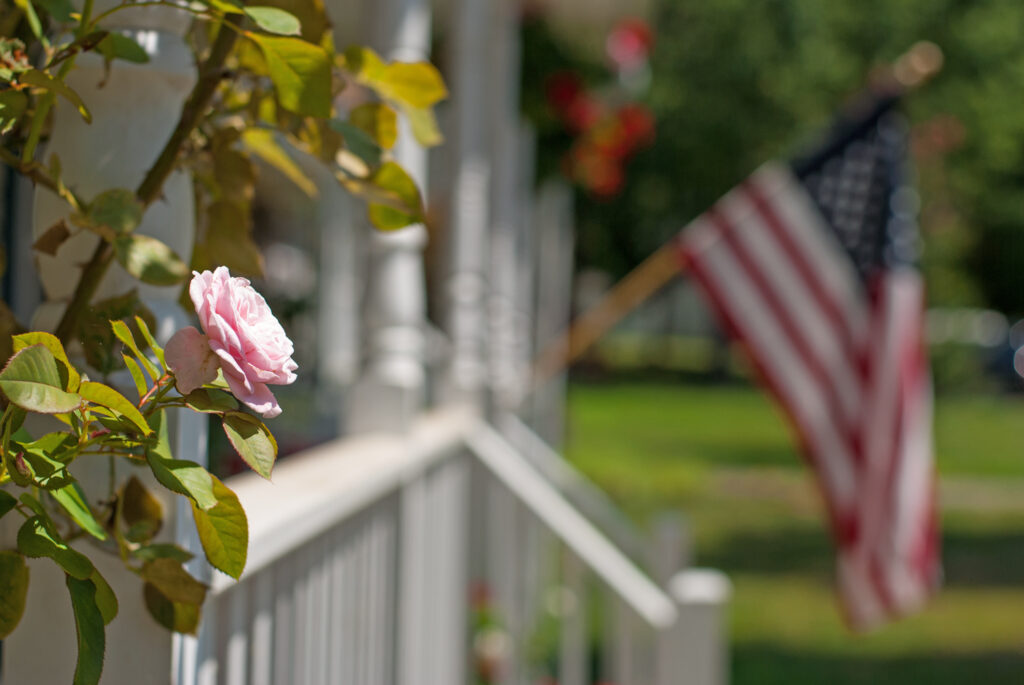 Houses in the old days weren’t built like houses today– the ones that are up in a few days, ripping up all the venerable old trees and placing the developments, cookie cutter style, in a neat, tidy line so that everyone can be exactly the same– no character, no personality.  Houses back then respected and were built with the land.  They were positioned so that the morning sunlight spilled into the kitchen, aiding the cook as she prepared breakfast, often by the light of an oil lamp.  Houses were turned so that the natural breezes of the landscape went through them.  It was not uncommon to see my grandparents’ farmhouse with both front and back doors propped open, a life-giving breeze like a fan rushing through, kissing the excess warmth from our cheeks.  Old homes often had transoms– little extra rectangular windows on top of the doors so that air could still circulate at night even with the doors closed and locked.  Windows were generous and nearly always open, their heavy wooden frames propped up by bricks, boards, or even occasionally a seldom-read volume of Milton.  Who says learning never comes in handy?  😉 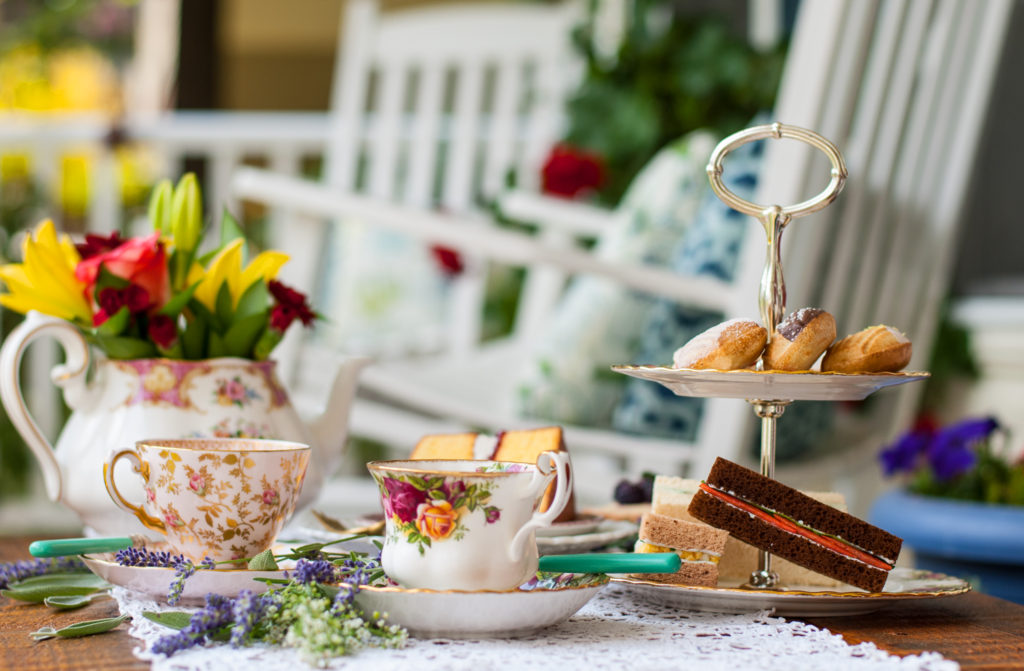 They had their own kind of magic, those porches of yesteryear, that cannot be replicated today in identical neighborhoods that are quiet except for the hum of air conditioners.  People knew their neighbors back then– you called out to your friends as they passed; maybe you invited them up to “sit a spell” and have a glass of lemonade or iced tea.  Maybe they would have helpfully grabbed your mail on the way up the driveway, handing it to you with a smile as they joined you.  Somehow meals always seemed more fun when Mom said, “You know what, it’s hot. Let’s eat outside.”  Calling the most simple meal “a picnic” made it seem like something extra special. 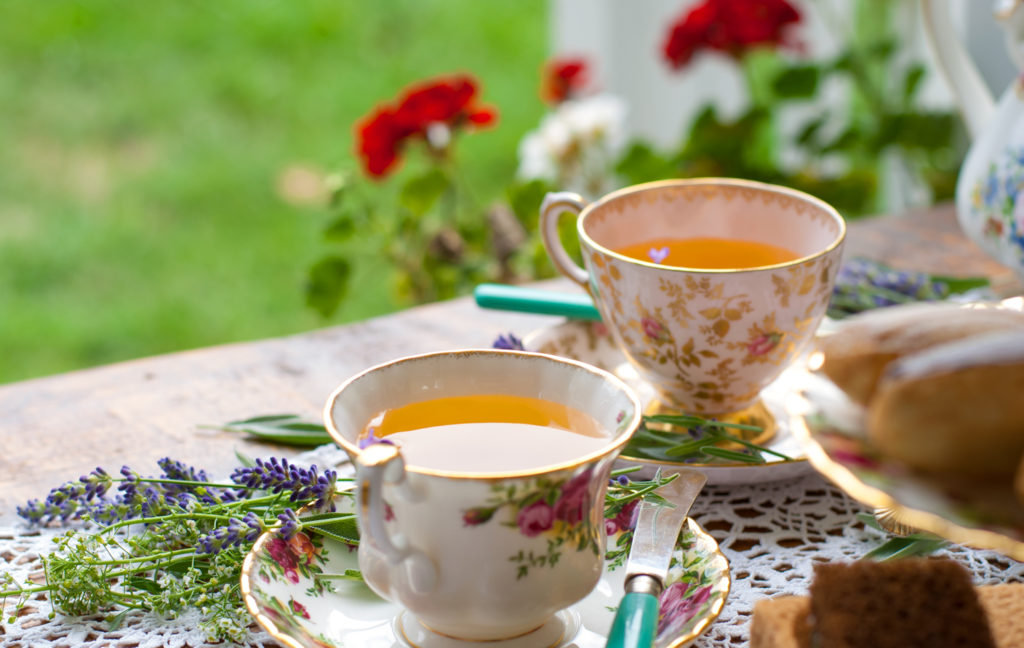 At twilight, though, the porch really came into its own.  The performance always started slowly– like the first, breathless hush of the crowd as the conductor takes his platform and adjusts his music.  We knew the symphony was about to start, and slowly family members would quietly join us as their labors ended for the day.  The air, which had been oppressively hot through the day, was cooler now.  The evening air seemed to breathe with satisfaction as it, too, relaxed.  Slowly, lightning bugs started to dot the yard and fields which stretched into soft, inky darkness that was sleepily settling in for the night. 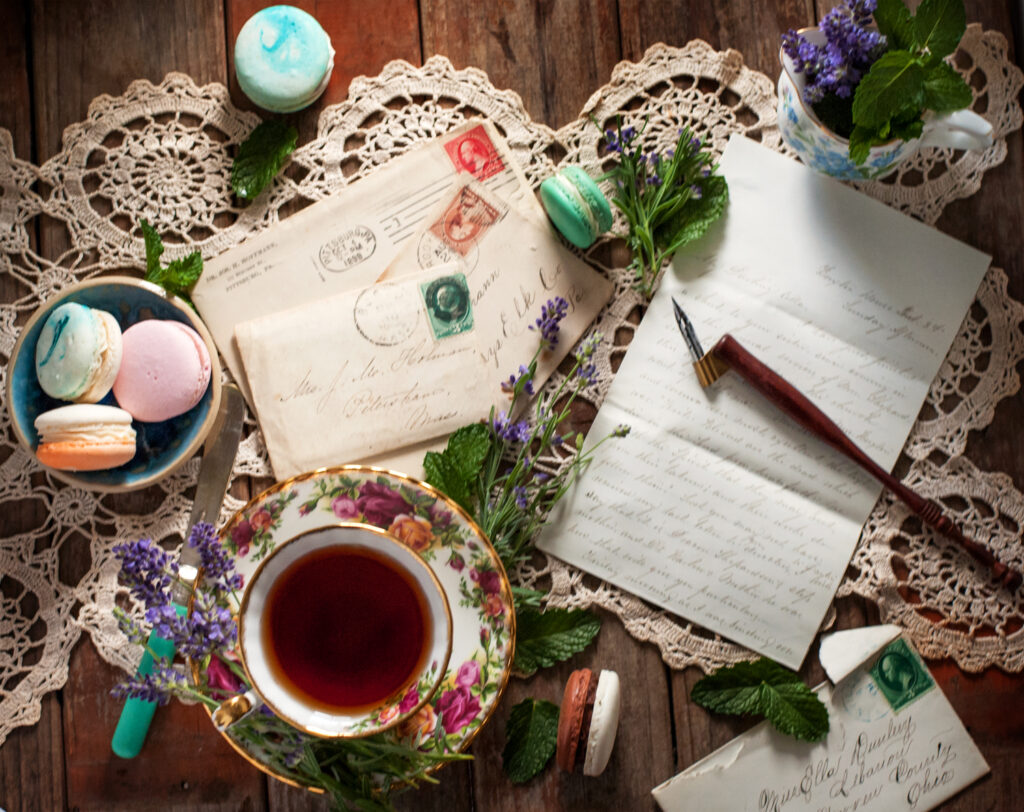 It was here, on the evening porch, that I learned the art of sitting still.  We didn’t turn the light on often, as it drew moths and mosquitos.  But I learned that just sitting there, quietly in the deepening twilight, not able to see to “do” much of anything, became a beautiful respite.  You could hear the creak of rocking chairs and the gentle swaying of the porch swing.  You could hear the soft breathing of the dogs that lay there, just keeping us company.  Kids ran barefoot through the yard, catching lightning bugs in old Peter Pan peanut butter jars with holes poked in the lids.  The moon came out and smiled.  Sometimes on Sundays we had pie.  There was always coffee. 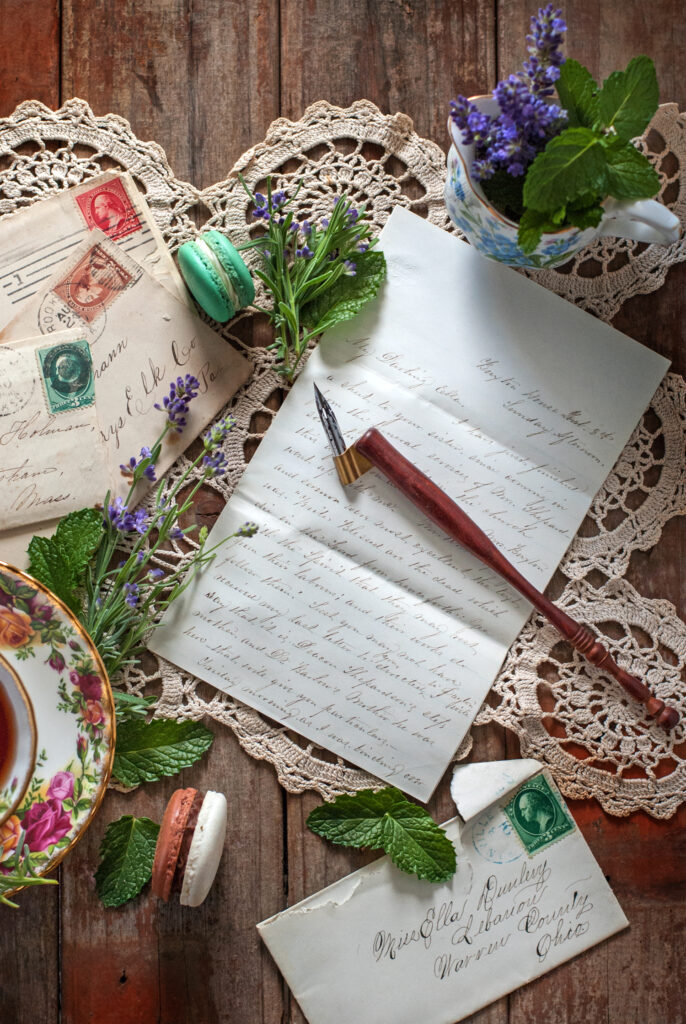 I once asked my Grandpa, “What are we supposed to do out here?”  He smiled and gently pushed back on the swing, lulling both of us into quiet.  “Since when do you have to do something to enjoy time together?” he asked.

It was an interesting answer from a man who worked from sunup to sundown every day, each day of the year on the dairy farm where my mother had grown up.  A farmer doesn’t really have holidays. Cows don’t take the day off for Christmas– they still wake up at 4 AM, bawling to be milked and fed.  The porch time in the evening was a sacred period of renewal and respite that hard working people looked forward to all day– a time when the day’s work was finished and they had a few glorious moments to just . . . sit. 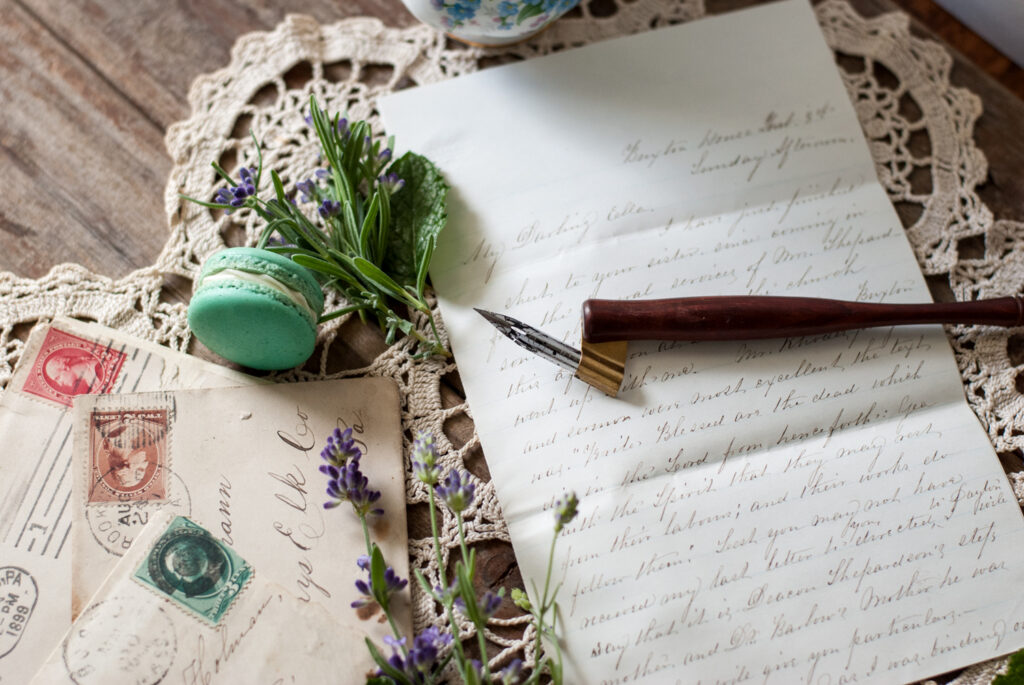 I think I first experienced the burn to become a writer, sitting there on the porch.  Stories flowed like water, their soft loveliness washing over me like the sparkles of magic just starting to peep out of a black velvet sky overhead.  To hear my grandparents talk– low and soft, almost like music, as they related tales from their childhoods and youth, was magical.  They never rushed during this time, as they had to so often during the working day.  They paused and told the stories with a natural cadence to their voices that seemed to sway me to sleep as much as the old, wooden swing did.  Storytelling from its very beginnings was an oral tradition– parents and grandparents passed down the stories to their children.  Children learned how to listen.  Time seemed to stop. 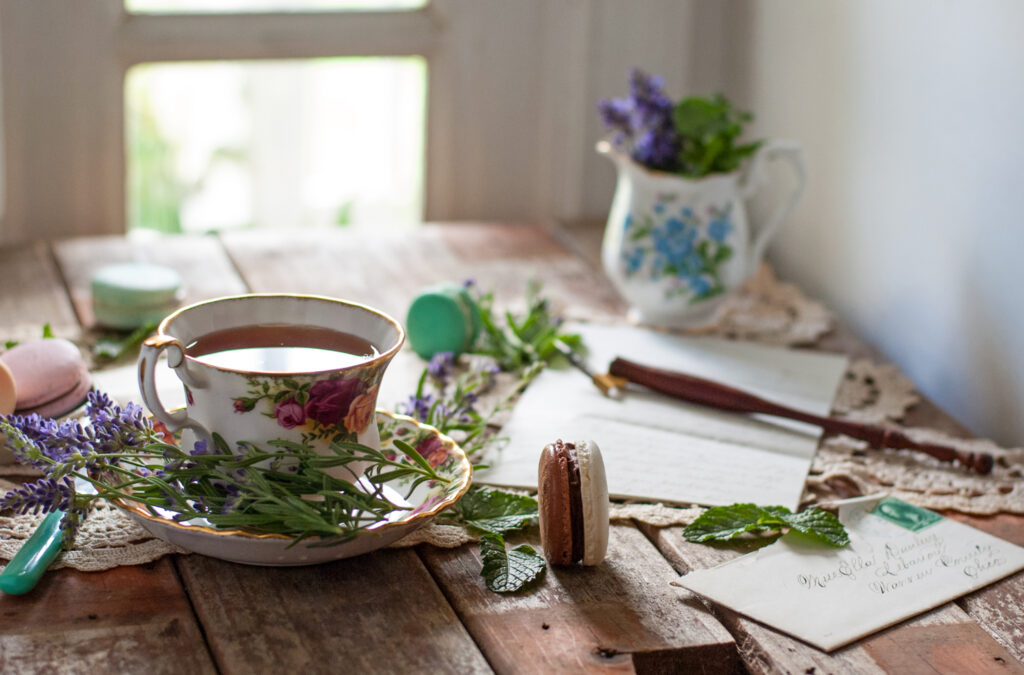 I think in some ways, it was easier to talk in the dark.  Pennsylvania people tend to be hardworking and quiet.  My Mom always said “It’s the German in us.  We’d rather walk than talk.”  Sitting out there, the moon bathing the pasture fence in silvery light, I felt like the world was transforming into a fairy tale before my eyes.  I heard my grandmother’s voice, soft and low, like the reeds bending gently along the pasture fence, as she told us about when she grew up.  She told me that she had always wanted a bicycle– had craved one fiercely, but since it was the Depression, her parents couldn’t afford one.  She said that her mother could make anything– delicate crochet doilies with stitches so tight and perfect you would swear they could never be created by a human hand.  Her pie crust was so light and flaky that “It almost flew off the plate.”  Gram said that her mother “made her pie crust look exactly like a rope.  It was so beautiful and she tried to teach me, but I could never get the hang of it.  I wish I had a picture of it.”

Lost in thought, we would sit there.  We would think about the generations that went before us– the lessons that they taught us.  We would think about the skill set that they developed for survival in a time when nothing was guaranteed and sometimes you ate green beans or corn or fresh, ripe tomatoes with salt on them for 7 days straight for supper because that’s what was in the garden, and there was no money for anything else.  A new growing season was met with delight because you were sick of whatever you had just eaten and peeled and canned for weeks straight, and now that it was dying down it was time to welcome and then get sick of something else.  Come winter all the players made another appearance on the table from bright, home-canned Ball jars lining the pantry shelves like so many precious jewels.  When the jars started to run out you knew that it was almost time for something else to grow outside to start replenishing them.  Seasons came and seasons went.  We went with them.  We were farm to table long before it was ever considered hip and chic and trendy.  We did it because it’s what the land did. 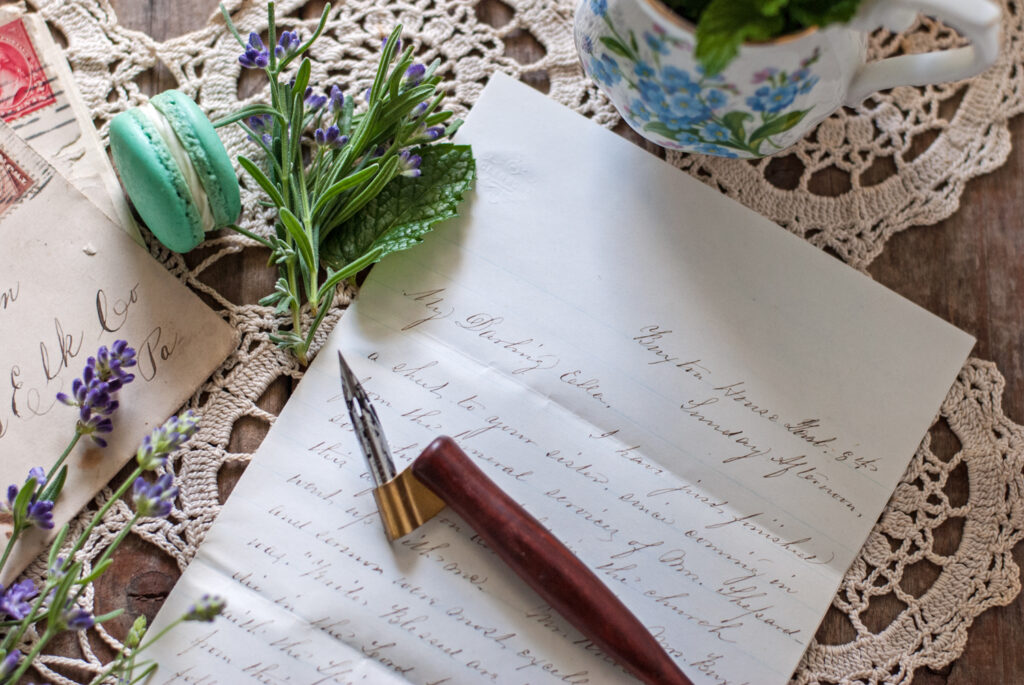 Sometimes on especially fine nights, we would hum or sing together, almost without even realizing we were doing it.  An honest, quiet life and hard work done well bring a quiet song to the soul.  You feel it, down deep in the bone. 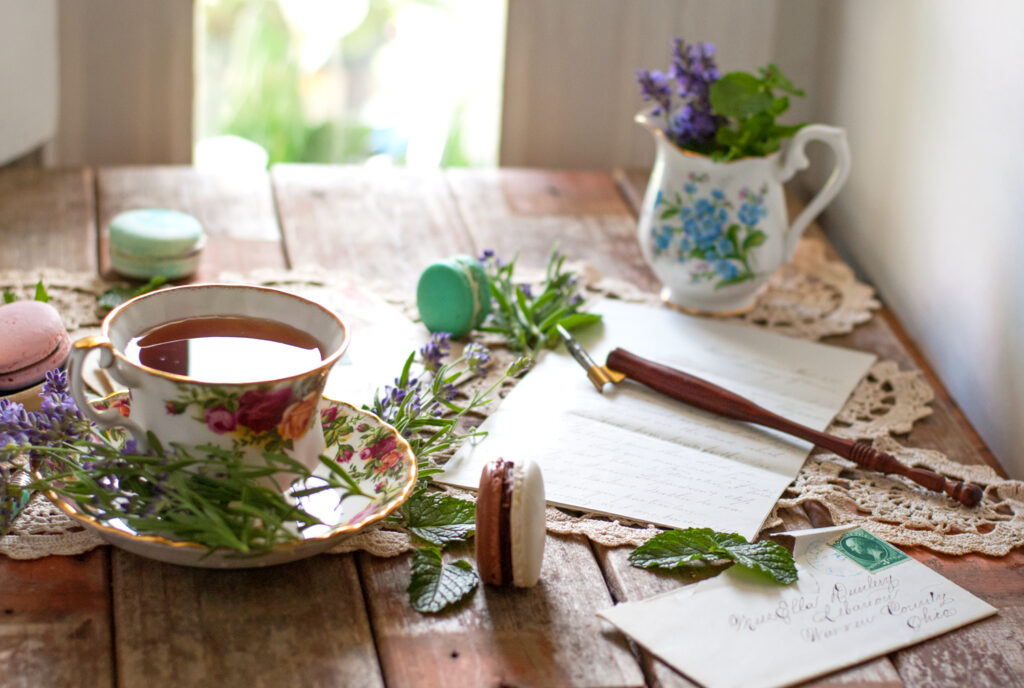 I fell in love with my house because of the porch.  Even though no one had used it in years (who sits on porches anymore?) and it was overgrown and covered in badly peeling paint, I loved it.  It whispered to me.  My heart immediately whispered back.

The first thing I did when we moved in was to pull away the vines and overgrown shrubs.  I painted my porch’s sad, tired face and got some rocking chairs.  I made flower beds and filled them with roses and geraniums.  I planted herbs so that I can come outside, in my bare feet, and snip delicious basil or thyme or mint, still warm from the sun, to put into a recipe.  I got a porch swing. 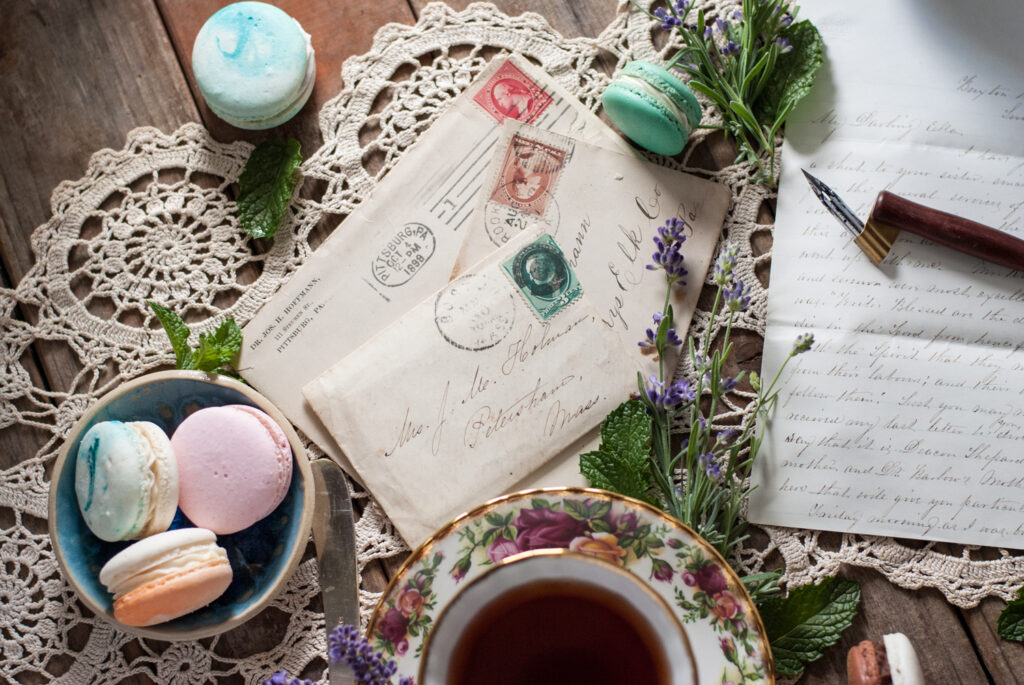 I sit out there sometimes when it’s quiet– when it’s starting to get dark.  I bring a cup of tea or a book, but they are just supporting players.  The porch is the star.  I sit there, and I watch the moon come out– again bathing the yard in silver loveliness.  It says, “Why hello.  There you are.  Come to spend some time with me at last?”

And I just smile.