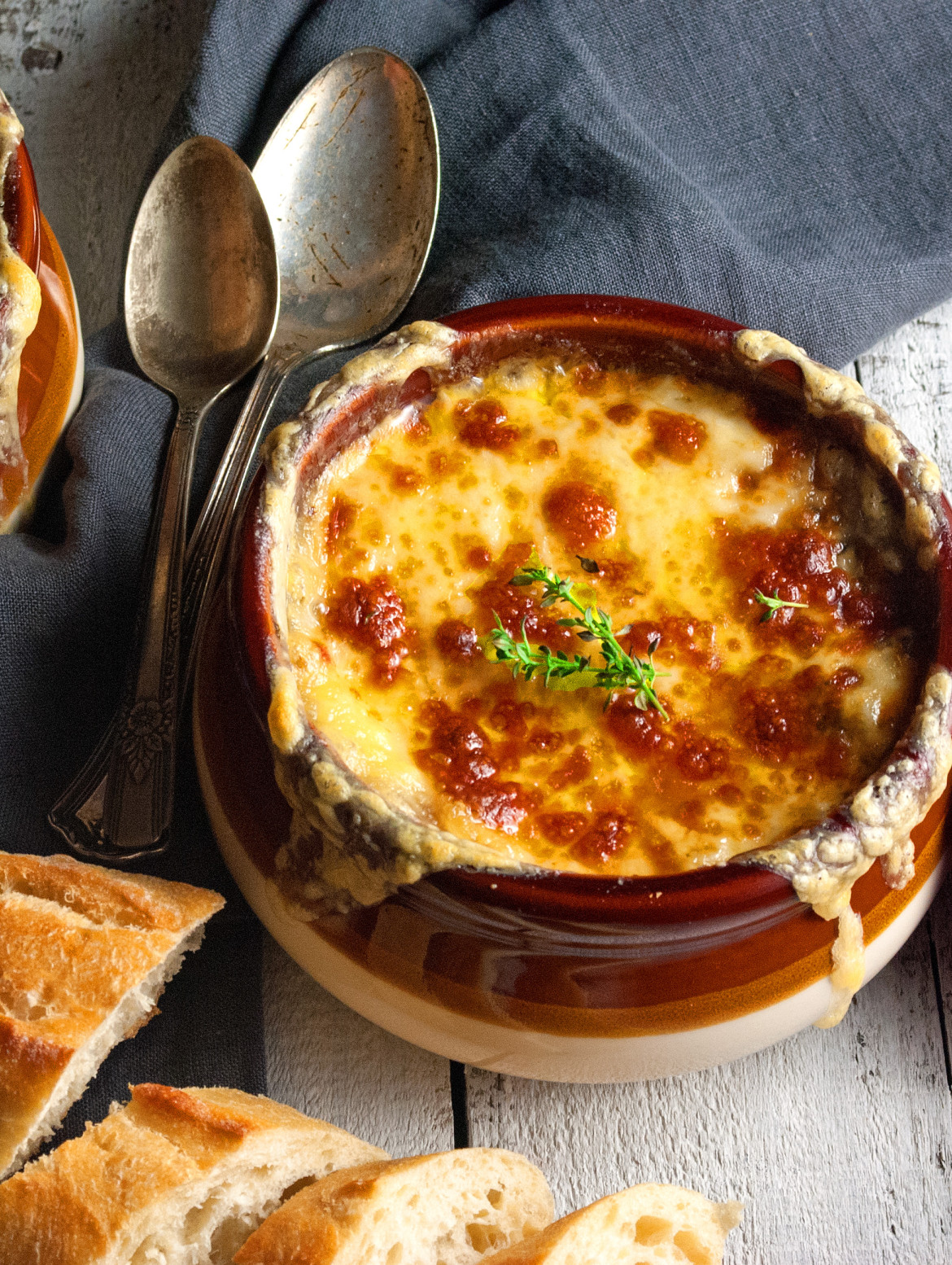 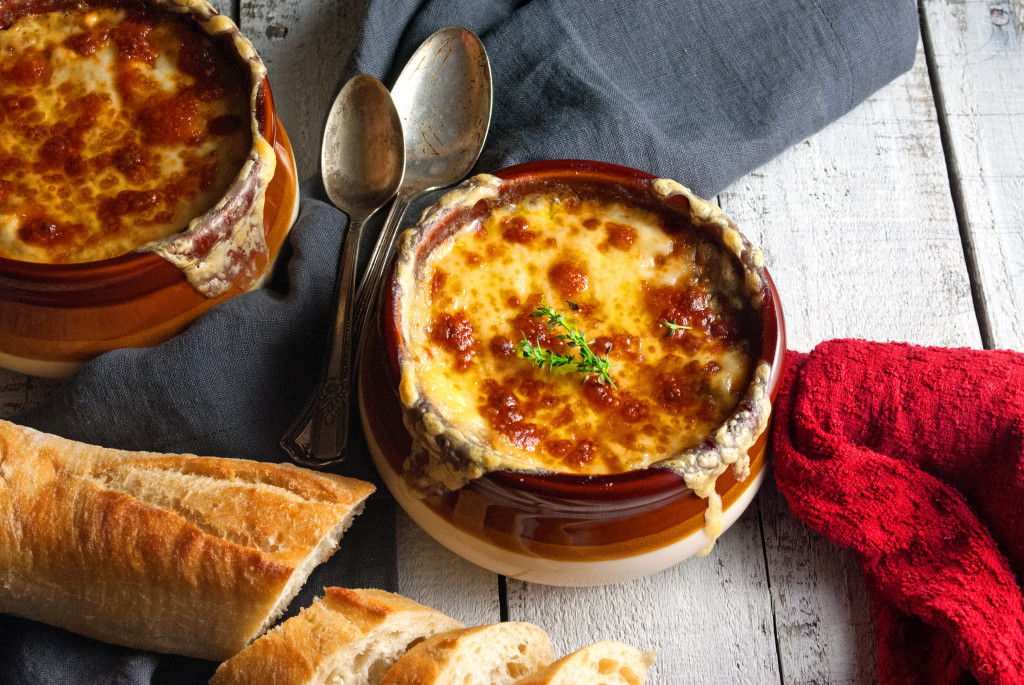 You know the scene from the cartoon “Ratatouille” where Anton Ego tastes the Ratatouille? He takes a suspicious bite, and then, suddenly, he stops chewing, his eyes go wide, and he is instantly transported back in time to his childhood, where his Mom is serving up humble Ratatouille in a sunny kitchen?  Food can do that to you.  When I taste or smell certain dishes, I am instantly transported back in time.  The smells of onions and celery instantly make me think of my Grandma’s kitchen.  Roast chicken reminds me of my Mom.  Swiss steak makes me think of my Mother in Law, and how she made it when I met her for the very first time.
Food is memories.
Today, we are making some food from which memories are made: French Onion Soup.  The story goes that, once upon a time, a poor French peasant, who had nothing, prayed for a miracle to put food on his table, when his coffers were bare.  He used what he had– an old sack of onions, water from his well, and a baguette too stale to eat– to make a nourishing meal for his family (Not sure where he pulled the Gruyere cheese from.  haha).  Now, whether that story is true or not, I’m not sure.  But one thing is sure . . . French Onion soup is delicious.  Delicious isn’t even really the right word.  It is . . . transcendental.  French Onion soup combines the best of all flavors– onions, beef, cheese, and bread . . . and, somehow, recreates that ancient miracle to create the most ooey, gooey, savory, steaming bowl of goodness that you can imagine.
This soup warms both body and soul on a cold autumn night.  It bubbles and simmers merrily on your stove, all day, creating that is unmistakably “homey” scent. The finished bowls make a beautiful presentation, too– with their cheese bubbling and glowing merrily.  You can even break out the ‘ole Crème Brulee torch and broil the cheese at the table, for a “wow” of a presentation.   It’s just a gem of a dish.
Goodness.  I’m getting hungry just talking about it. What are we waiting for?  Let’s do this!

(based loosely on an Allrecipes.com recipe but altered for my tastes)

In a large Dutch Oven, caramelize onions in butter and oil until well browned.  Add in wine or cooking sherry (or a combination of both) to deglaze the pan. Add in the rest of the ingredients and simmer soup, covered, on low, for 1-2 hours, until the flavors have melded.  When ready to serve, place soup in oven safe ramekins, top with toasted bread and cheese, and broil until the cheese is golden brown and bubbly.
Have a second bowl.  Of course, this step is completely optional. 😉
Now, in pictures! 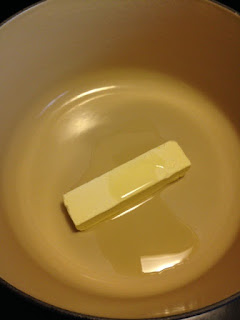 To start, drag out that big cast iron Dutch Oven that you fell in love with, but that has been sitting, neglected, all summer, while we enjoyed watermelon and ice cream.  The Dutchie is the workhorse of the cold weather kitchen.  There is nothing quite like a big, heavy pot of soup simmering away on the back of the stove, when the weather is raw and the wind is whipping the outside of your house.  My favorite is the Cadillac of Cast Iron– the Le Creuset here

.  It’s worth the investment– these things last forever, and they simmer, broil, and braise like nobody’s business.
Put your Dutch Oven on medium heat and melt 1 stick of butter or margarine (1/2 cup) and 1 tbsp. of olive oil.  This seems like a lot of butter, granted– but this recipe makes a huge pot of soup.  I like to make a full pot and freeze the rest for another time, or take it to someone else, to share.  If you’re going to put in all the time and work caramelizing onions, you might as well make enough to last a while 😉  This recipe makes enough for 10-12 servings.  If you don’t want to freeze some soup for later, you can easily cut this recipe down into 1/2 or 1/3 of a recipe.
While the butter is melting, break out your tissues, because you’re going to cry.  Time to cut LOTS of onions.  Phew.  Start wiping those eyes! 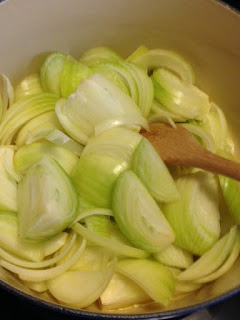 Here are a few tips to help with the “weepies” while cutting as many onions as you have to do, today.  Sometimes, no joke, sticking out your tongue while you cut helps.  Oddly enough, this does seem to work, but the second you pull your tongue back into your mouth, the eyes start to water, and then there’s nothing you can do.  The only surefire method I have ever found is to put a small fan by your work space, angled just so that the “onion air” blows away from you, and the fumes never get a chance to reach your eyes.
Or, you could just think about every sad movie you’ve ever watched, and every breakup you’ve ever endured . . . about everything sad you’ve ever watched . . . and cry for them all at once.  Princess Buttercup!  Will Wesley ever come Baaaaaaaccccckkkkkkk!!!  Waaaaahhhh!!!!!!!!!!!!!!!  Will Harry ever get together with Sally?  Will Carey Grant ever discover that Deborah Kerr didn’t make it to the top of the Empire State Building because she was crippled?  Bwaaaaaahhhhhh!!!!!!!!!!!!!!
Get it all out.  Get it allllllllll out. 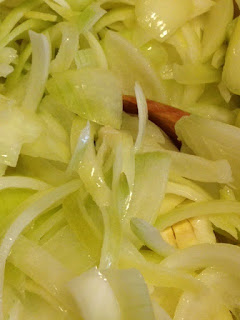 Haha. Anyhow, these onions don’t have to be cut very finely or diced, in any way.  I peeled my onions, then chopped them in half.  I then roughly sliced them and threw them in the pot.  Easy peasy.  Sniff, sniff.
Continue chopping onions.  Continue thinking sad thoughts.
When you have all the onions chopped, go ahead and stir them and throw in a little salt (maybe a teaspoon) over the top, to start them letting out their juices.  Let the onions cook, not stirring terribly often.  You want the onions to get enough surface time with the pan so that they start to get nice and golden brown. Keep the heat at about 3-4.  You don’t want the onions to burn– just keep them cooking at a nice, even heat.  You also don’t want them to be at so low of a temperature that they never get brown.  Shoot for medium to medium high heat. 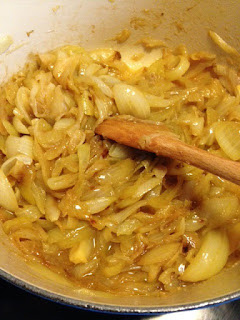 It takes quite a while, but eventually, the onions’ juice kind of cooks out, and they start to dry out and get a nice, golden color.  At this point, people sometimes stop cooking the onions, thinking they have reached caramelization.  But don’t do it!  These onions have not yet begun to fight!  This stage, right here, is called “Blonde” onions. They are good, sure . . . but this is the Lady in Waiting.  And we are aiming for Princess.
Just a note, here . . . at this point, it can be really easy for the onions to start to burn, since there isn’t as much fluid in your pan.  Keep the heat steady, and stir a bit more often, scraping the bottom of the pan, as you go. This is what the bottom of the pan will look like.  A little brown is good– we want the onions to keep getting more color.  However, you want to keep scraping that delicious brown stuff up and adding it to the onions.  Don’t let it just sit there and burn.  If it gets really sticky and seems like it might burn, go ahead and add the white wine or cooking sherry and deglaze the pan.  Deglazing the pan just means that you take a broth or wine (you can substitute beef broth for the wine, if you prefer) and pour it into the pan. Use the liquid to loosen the brown bits at the bottom of the pan and scrape them up, with your wooden spoon.
The smell will be intoxicating and delicious, too, by the way. YUM. 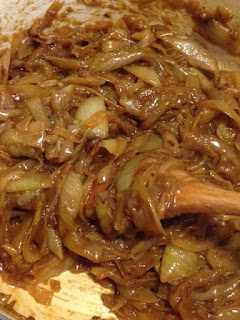 NOW we have caramelized onions.  They almost become a jelly or syrup– they are so soft and delicious.  At this point, go ahead and add all your other ingredients (broths and spices).  The soup won’t taste quite right, yet.  If you taste it, now, you will think, “Something is missing.”  You will want to add more spice or broth. DON’T.
Wait it out.  Like a good relationship, this one needs time to blossom. 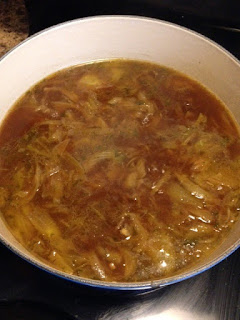 When all your spices and broths have been added to the onions, stir the mixture, well, making sure to scrape all the brown bits at the bottom of the pan.  Cover the Dutch Oven and allow the soup to simmer, on low, for 1-2 hours.  Enjoy the smells and rename yourself Julia Child if you want to.  I won’t judge. 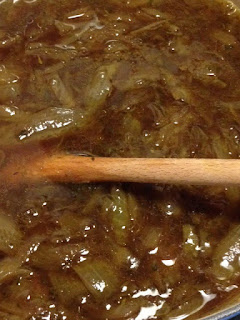 Oooooh . . . I love meals that I can prep in advance, smell and savor all day, and then have ready whenever the family is hungry.  As an added bonus, you can make this “broth” part of French onion soup up to a few days in advance, and then top and broil the ramekins when you are ready to serve the soup. You can also freeze the broth and pull it out of your freezer on a busy morning, so that it is all thawed and waiting for you, when you get home from work.  Imagine throwing together all day French Onion soup in 5 minutes, flat, under your broiler.  Niiiiiiiiiice.
But I digress.
This soup, by now, is incredible.  NOW you may taste it.  And taste it again. Pretend you’re still tasting as you slurp it up.  Goodness.  It’s so good, it almost doesn’t even need the cheese.  Who am I kidding? I could put cheese on my daily multivitamin.
Fish out your bay leaves and throw them away.  I sometimes forget to do that, and it’s awkward when someone finds the leaf in a bowl (unless you’re a child, in which case it becomes a delightful treasure hunt).  Just don’t eat the bay leaves . . . they don’t taste very good.  But if you want to have an impromptu treasure hunt, be my guest. 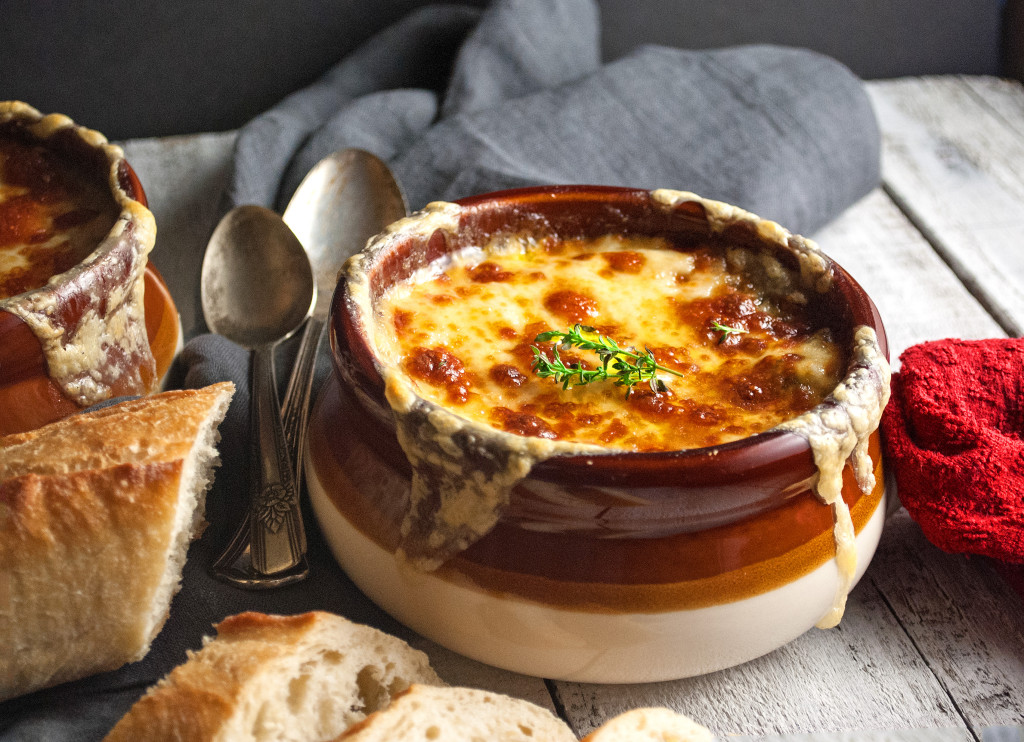 Fill oven safe ramekins with a layer of soup, toasted bread, and cheese.  I like to use a mixture of Gruyere cheese and shredded Mozzerella.  Swiss cheese is amazing, too.  Toast the ramekins under your oven broiler for about 3-4 minutes, until the cheese is golden brown and bubbly. 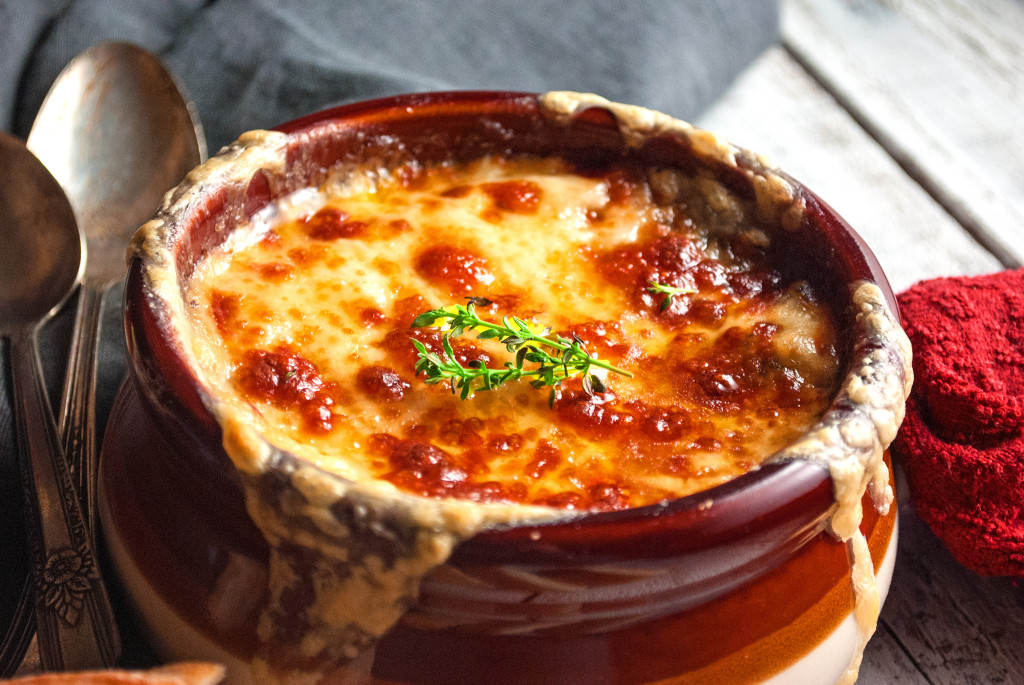 Close your eyes and have your very own “Anton Ego” moment.  Make a memory.  Feed your soul.  Nourish your very being.  This is the food from which memories are made.
You did it.  And I’m just so proud of you.