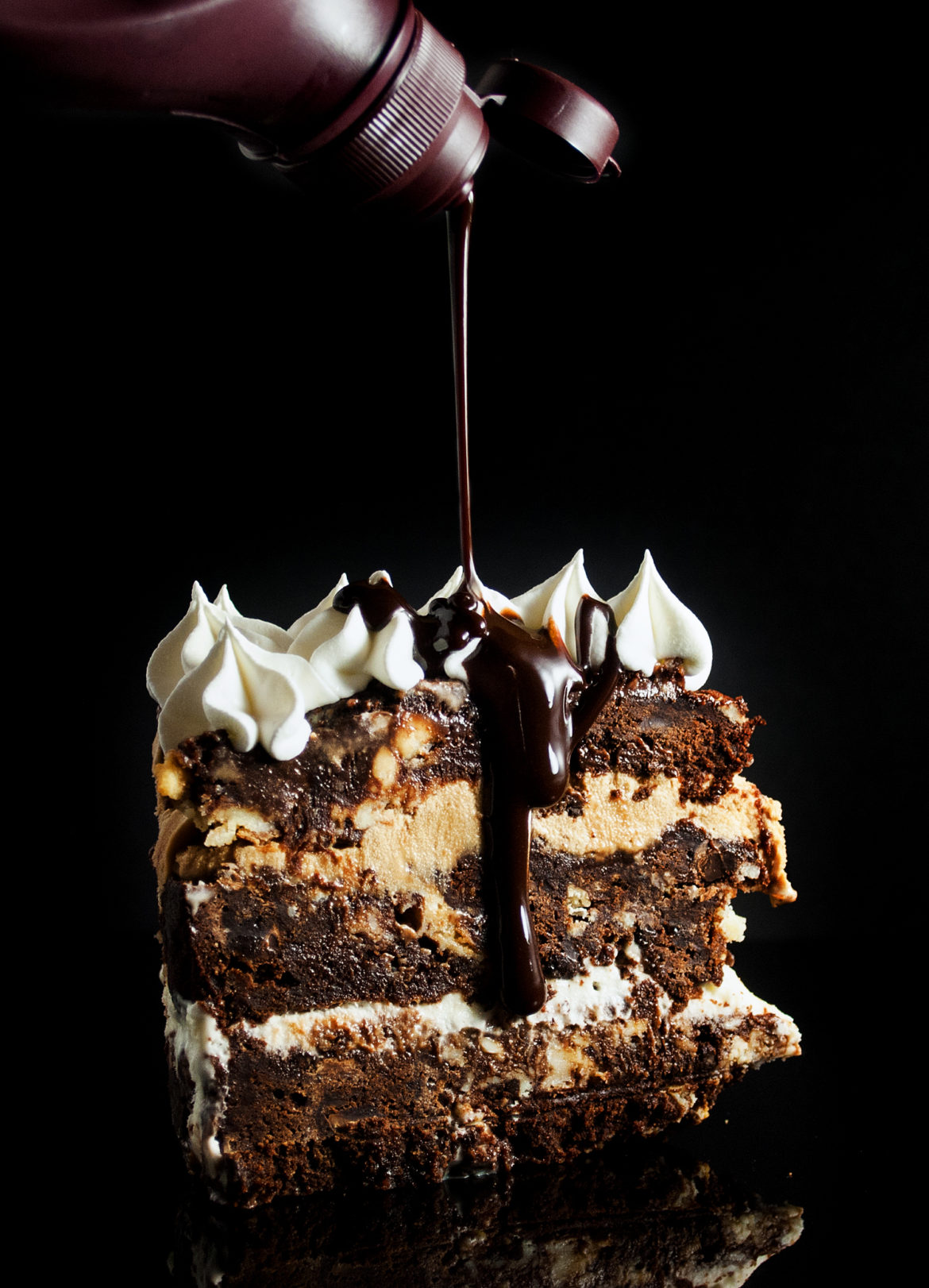 “All you need is love.  But a little chocolate now and then doesn’t hurt.” — Charles Schulz

I still remember the day my college roommate broke up with her boyfriend.  Well . . . maybe he *technically* broke up with her, but as her roommates, we were all immediately on her side (because, let’s face it– we had to live with her).  Suddenly the guy that had been the sweetest, nicest, and most thoughtful being on the face of the earth was the horrible, awful scumbag of the universe.  Why had we EVER liked him?  Had there ever been ANYTHING good about him?  Surely not.  On second thought, he wasn’t REALLY that good looking.  He wasn’t REALLY thoughtful at all!  Goodness– a sales lady probably picked out those flowers he sent for Valentine’s day.  She was better off without him.  We all congratulated her on what was really the very best of good luck.

And then the tears started.  Goodness.  We could have changed our names to “Noah,” with all that flooding going on in our dorm room that night.  Suddenly her life was over. He was the only man she had ever loved.  She was going to die.  That night.  That moment.  That second.  Her heart was breaking in two.  She wanted Scotch tape to put his (freshly) torn picture back together.  Things were getting ugly there, for a minute.

And then . . . someone had a great idea.  One of the roommates remembered that she had a box of chocolate in her stash.  She cracked it open, and we all dug in.  Suddenly, our tears turned to sniffles, and then to laughter as we sat there cracking up at each other’s smeary, teary faces (somehow commiserating with a crying friend makes you cry, too, and you don’t even know why).  As we talked and shared that snack, the emotional tension drained away, and we were left with nothing but chocolate bliss.

Ah, chocolate– as trusted as an old friend.  It’s almost impossible to hate this decadent beauty that brings so many smiles to our lives.  It bolsters us through all-nighters studying for the big test and soothes frazzled nerves when we are lying crumpled in our beds, choking back tears from a recent breakup.  It’s the gift of choice for Valentine’s day and the treat our kiddos squeal over when they open their Easter baskets.  Oh man . . . it’s just great.  In fact, I can’t really think of anything I like better than chocolate, unless perhaps it’s chocolate COMBINED with ice cream.  Now that’s a match made in heaven.  Come on. You need this dessert in your life.  Your stomach just called. It wants this for its birthday– today, if possible.

Mix melted butter, oil, cocoa, and sugar together.  Add vanilla and egg and beat to combine.  Stir in flour/salt.  Stir in flour-coated add-ins, if desired.  Pour into greased 13×9 pan and bake at 350 for roughly 45 minutes– you want the brownies to still be slightly fudgy in the center.  Allow brownies to cool, completely.  Layer brownies and ice cream in layers in a springform pan, freezing in between adding layers.  Freeze until completely firm before serving.

Now, in pictures!  And don’t forget to treat yourself to my new e-book, Sunny Days and Sweet Tea, which is FINALLY out for purchase, after a ton of hard work.  Whew.  Get your copy here 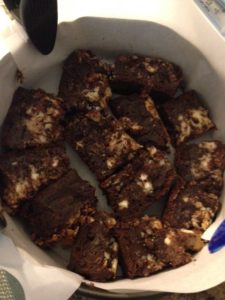 This is one of those beautiful little desserts that you can make without a whole lot of effort. It’s a beautiful layered dessert that you can make ahead of time, too– keep it nestled in the freezer, and then whip it out to impress the pants off of unexpected company that drops by.  If you need help baking the brownies, check out my original decadent brownie post here.

Basically, we are starting with something that is absolutely beautiful with just a teeny bit of shake.  No– it’s not your stomach after you have a baby.  We want delicious, fudgy brownies– you know what I mean– the kind of decadent chocolate dessert that oozes more than a politician on election day.  My brownie recipe given, above, makes very thick brownies, so it’s easier to get them fudgy and decadent.  If you’re substituting a boxed brownie mix, try testing your brownies 5 minutes before they *should* be done, with a toothpick, to see if they are ready.  Your toothpick should have moist crumbs on it, but no liquid.  If the toothpick is dry, the brownies will not be super fudgy, but that’s OK.  Brownies are delicious in any form 😉

To make your dessert, start by lining a springform pan (the kind of pan where the sides can come off, when your dessert is done) with parchment paper.  After I cut out a circle of parchment for the bottom of the pan, I used chip clips to hold the side strips in place.  Hey . . . it ain’t pretty, but it works 😉  Cut about 1/3 of the brownies and kind of “smoosh” them into the bottom of the pan, so that they form a crust and fill in all the spaces.  Yes.  This means that you can think about everything that has frustrated you, today– forgetting your coffee at the house when you ran out the door, listening to your kids whine about wanting cheese on their sandwich and then whining BECAUSE there is cheese on their sandwich, having someone pull right into your spot at Walmart from the back end just as you were going to snap it up . . . and smash away. 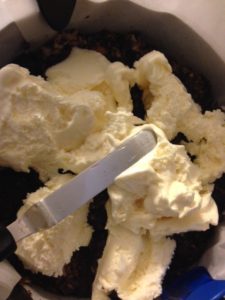 Next, put about 2 cups of softened vanilla ice cream on top of the brownies.  Use an offset spatula or spoon to smooth the ice cream and get it into a nice, even layer.  Next, stick the whole ‘shebang back in the freezer and let those layers harden.  Then do another layer of brownies and another layer of ice cream (I used coffee flavored ice cream for the second layer– YUMMO.  But you can use any kind of ice cream that you want).  Freeze, again, and then finish up with a final layer of brownie.  If you want to, you can pipe little peaks of whipped cream or cool whip on top of the brownie layer (yes– this can also freeze, and it’s delish!).  Let the whole dessert freeze super solid (overnight is best) before cracking open your treasure and cutting into it. 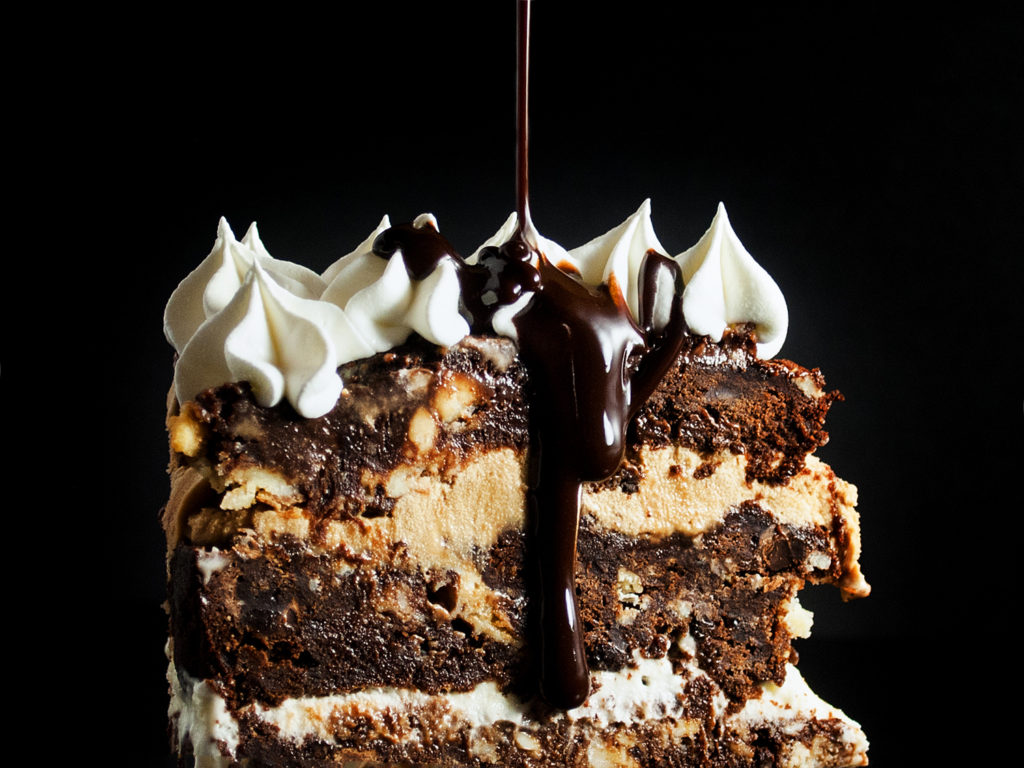 Serve with a drizzle of chocolate syrup and a pen . . . because everyone is going to want your autograph after tasting this little beauty. 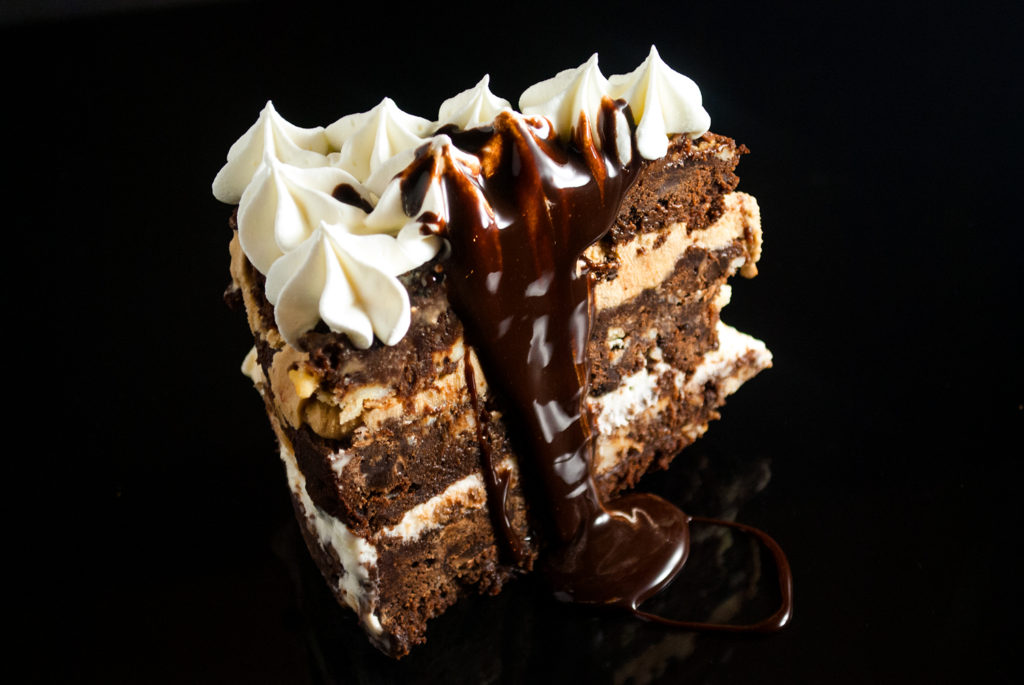 Seriously.  Look at it.  It’s a gigantic chunk of frozen brownie sundae.  It’s dripping chocolate sauce and looking at you with love in its eyes.  It’s telling you, “You know that bad day you just had?  Forget all about that– because you and I have one unforgettable night planned, together, my love.”  I think this dessert should run for president . . . because everyone loves it, and I can’t think of one thing wrong with it.  Didn’t I tell you the marriage of chocolate and cream was a match made in heaven?  And it is.  Ooooh . . . it is.