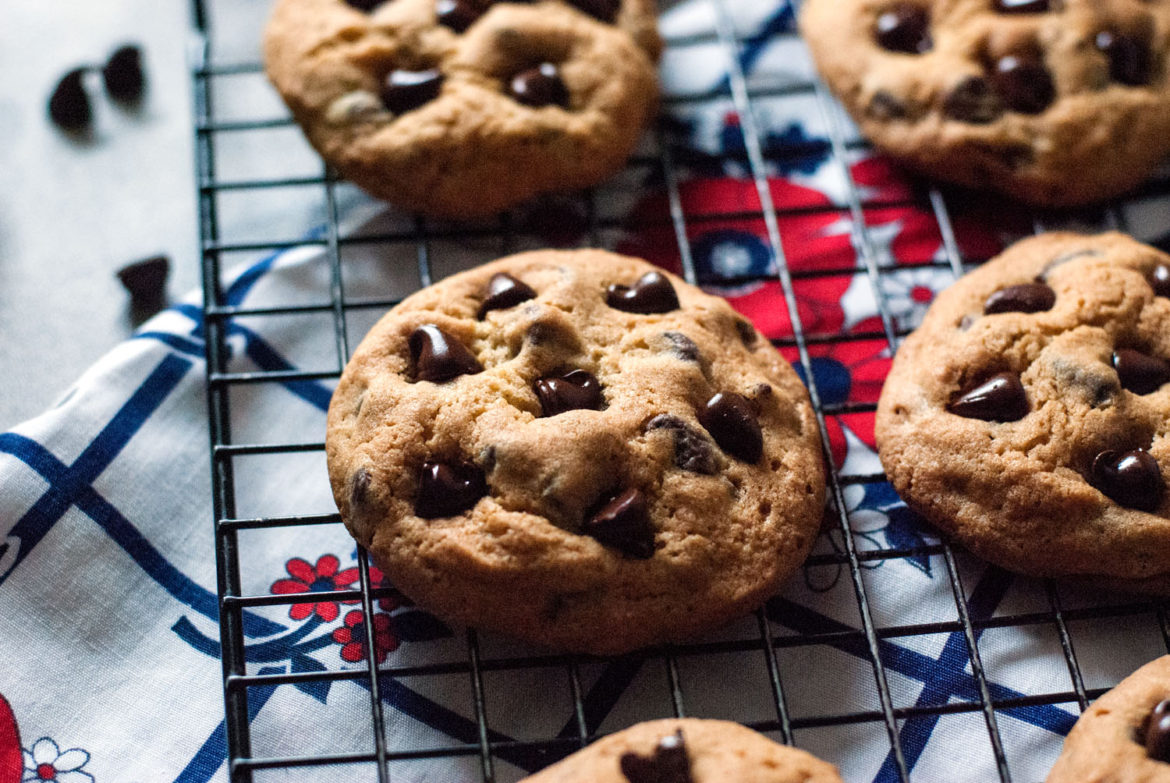 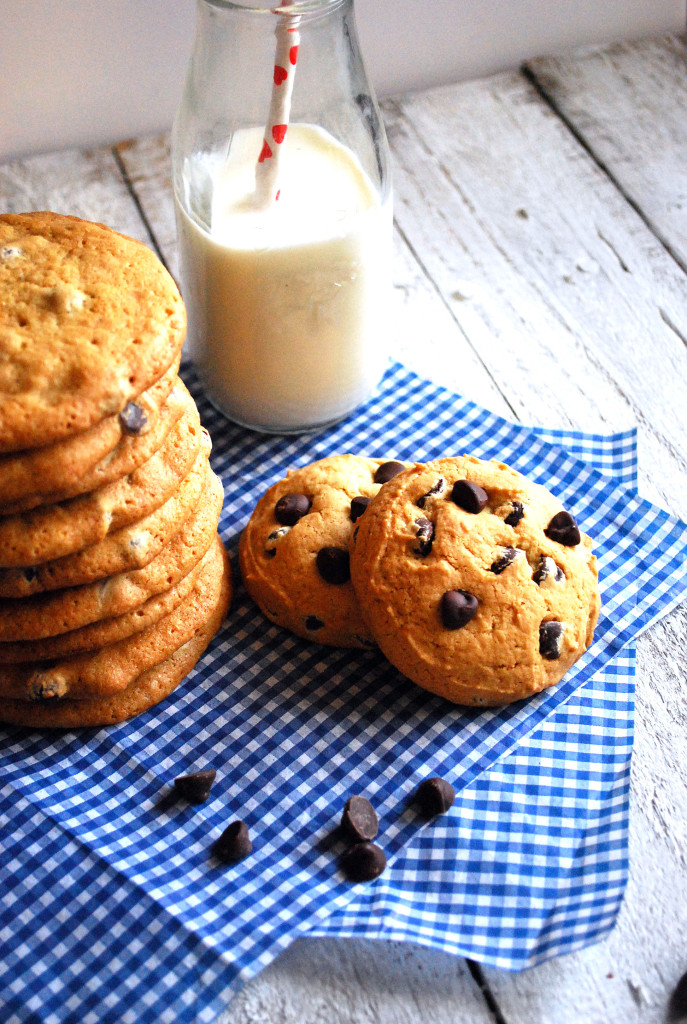 Cream butter and sugars until light and fluffy.  Add vanilla and egg; beat well.  Gradually add in dry ingredients.  Stir in chocolate chips by hand.  Place on silpat or parchment covered cookie sheet and bake at 350 for 9-12 minutes, until just starting to brown around the edges, and rotating trays halfway through baking.  Allow to rest several minutes on cooking sheet before moving to a baking sheet to finish cooling.Let’s take a look at the process in pictures! 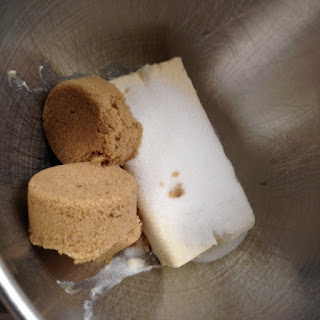 My “Unofficial cookie law” is this: Cold Ingredients are the enemy of good cookies.  Whenever I make cookies of any kind, I get the butter and eggs out of the fridge about 1/2 hour before I’m going to use them, so they whip up nice and light.
First, let’s cream your butter and both sugars.  Start out slowly, and gradually work to a high speed for a minute. 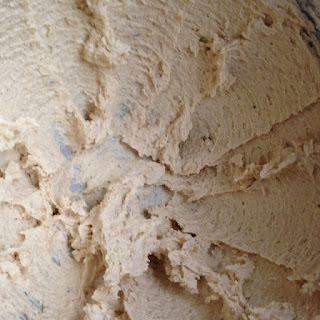 Unlike the creamed sugar and butter from the sugar cookie recipe, this one has brown sugar in it.  Therefore, your creamed mixture won’t look as light.  If you investigate it closely, though, you will see that it is fluffy like the sugar cookie dough, even if it is a little darker in color. 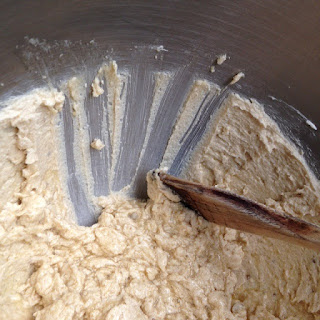 Add your eggs and vanilla.  When you were a kid, did you ever do experiments mixing oil and water?  Oh?  You do experiments like that as an adult, too?  (awkward silence)  Excuse me . . .
Yeah . . . they don’t mix too well.  To make sure that your egg incorporates into the oily ingredients (butter), make sure you scrape the sides well. 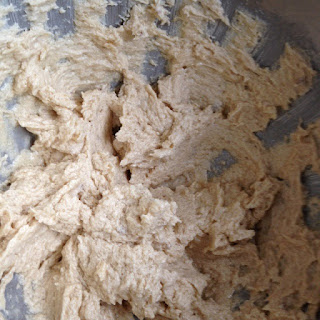 Now, add the salt and baking soda, and mix a few times just to combine.  We are going to add the flour, next . . . but a word about flour.
Believe it or not, recipes vary, based on what kind of flour you use.  I usually find that I get the best “true to measurement” results from the more expensive, primo brands of flour, like King Arthur.  When I use the cheaper versions (like Aldi flour), I have to add a little bit extra, to get the recipe right.  What I’m saying is, add the flour a little bit at a time, mixing after each time.  You may need a little more, or you may need a little less, depending on what kind of flour you’re using.  You want the dough to be thick, but also creamy.  Don’t make it so thick that the creaminess is gone, or the cookies won’t flatten, but will be kind of like little chocolate chip golf balls.  Too little flour, and too soupy of dough, and the cookies will spread like ultra thin frisbees.  Get to know your dough– and your flour– and soon you’ll be making perfect chocolate chip cookies, every time. 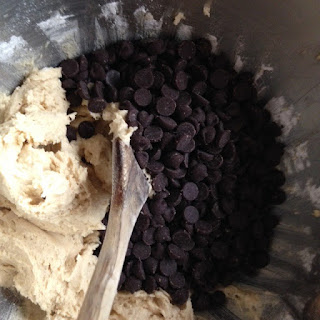 Now . . . the best part!  Drum roll . . . the chocolate chips have arrived!  Mix these in by hand.  They will wreak havoc on your mixer if you try to mix them with it. . . and what has your poor little mixer ever done to you?  You can also stir in some nuts if you like– pecans and walnuts are great in chocolate chip cookies. And life . . . like neighborhoods . . . is always more interesting with a few choice nuts included.
Also– who said you have to use “chocolate” chips?  I know this is technically called “Chocolate chip cookies,” but you can go nuts (literally)– try cranberry pecan with white chocolate chip, or maybe butterscotch chips with toasted walnuts and maple extract instead of vanilla.  How about macadamia and white chips?  The possibilities are as endless as your imagination.  Just prefer plain ‘ole chocolate chips?  No problem– chocolate is classic for a reason. 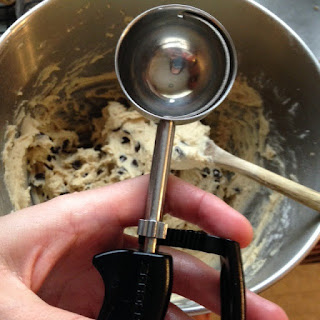 Next, enter your secret weapon– the cookie scoop.  I have a wide variety of sizes of these . . . for everything from dividing dough evenly between cake pans to making cupcakes and muffins perfectly, without that cringe-worthy “muffin top.”  I’ve tried cheapie cookie scoops, but they usually broke after several months, for me.  Granted, I bake a lot and tend to make my equipment work hard for its keep . . . but these have held up under all kinds of pressure, and they are also very comfy on my hands and easy to use.  I use the black (pictured here) for cookies, blue for muffins and cupcakes, and orange for teeny things.  Pick up these scoops as a treat to yourself, here

.
You’re probably thinking, “A cookie scoop?  Good grief.  What do I need one of those things for?  I’ve made cookies for years perfectly well with 2 spoons.  Why do I need some gadget to do the job for me?”
I know.  I said that too.  Until I got one.  I will never go back.  Take your baked goods from “Your toddler helped make these!  How sweet!” (Awkward silence).  “Ohhh . . . you made them?  Sorry.” to the envy of the school bake sale.  You’re welcome. 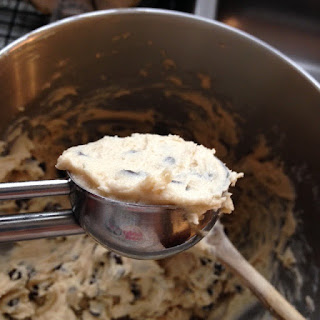 Grab yourself a scoopful of dough.  Go ahead and sneak a taste with your (clean!  You did wash hands, right?) finger.  Wash thoroughly afterward.  I won’t judge you for tasting. And you won’t die from the raw egg.  People are just trying to stop you from living your life.  Be a rebel, my dear Captain Kidd, and have some cookie dough.
Smoosh it against the side of the mixing bowl to make sure that your scoop will sit flat when you dump it out.  Place your cookie balls on a silpat, but don’t crowd them.  Do you work well when you’re elbow to elbow with other people, craning for space?  Neither do your cookies.  They don’t want a cramped apartment.  Give them the spacious country manor and they’ll reward you by being happy and delicious. 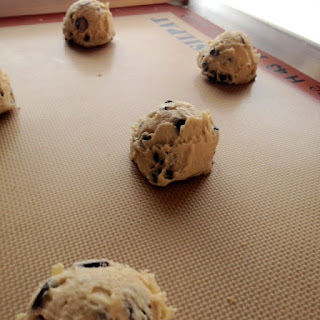 These beauties are all ready to pop into the oven.  You definitely need to use either parchment paper or a silpat for these cookies– personally, I prefer a silpat.  Silpats are kind of like reusable parchment paper– and nothing sticks to them.  The worst casserole spill-overs and messy, sticky cookies peel right off, with ease.  I use my silpats every single day.  Pick up a silpat, here

, if you need a treat for the baker in your life.  You won’t regret it.
Bake your cookies at 350 for 9-12 minutes, rotating sheets halfway through baking to ensure that they get toasty on all sides.  Because you used a cookie scoop, your cookies are all the (relatively) same size, and they should all be done around the same time. See this?  It doesn’t look done, does it?  And this is where so many people make the fatal mistake.  “My cookie isn’t brown.  Therefore, it is raw and isn’t done.”  WRONG!!!  Here is the only clue you have: see the edges?  They are ever so slightly brown.  You can see in both of those cookies in the picture that the edges and bottoms are starting to get toasty.  That’s enough.  Any more time in the oven and they’ll look more crisp than a sunbathing senior citizen on the Florida coast. 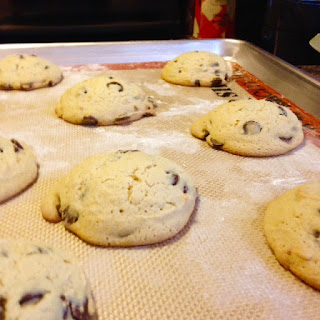 Another mistake that people make when baking chocolate chip cookies is taking them straight from the oven to the cooling sheet.  NOOOOO.
See how those cookies are puffy and weird looking?  If you take them off the baking sheet now, when they have first come out of the oven, they will break apart and remain puffy and weird looking.  It’s ironic that chocolate chip is the all-American cookie, because these cookies are so very American.  They require a good rest before they can get up and go to work for you.  If you give them their space and let them rest, they’ll be great.  Crowd them or push them too hard, and it’s gonna’ get ugly. 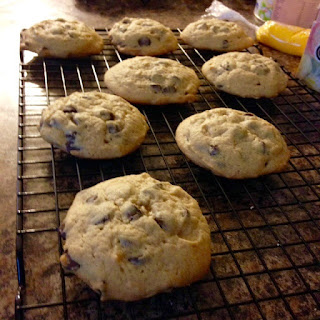 After about 2-3 minutes of rest, the cookies are ready to put on their suits and head in to work.  Get out that old faithful cooling rack, and let them finish cooling.  (Oh dear?  You broke a cookie? I guess you’ll just have to eat it, in the name of science . . . hehe).  See how the cookies kind of deflated, a little bit?  That’s good.  All the soft puffiness remains, though.  Just wait till you try one . . . er, two. 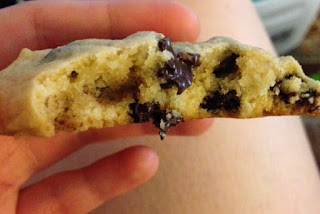 Yeah, BABY.  Now that’s a cookie.  It is nice and thick, without being tough.  Nice and soft inside, with ooey, gooey chocolate chips.  And they stay soft, for days . . . if you’re lucky enough to still have any cookies left, after that time. 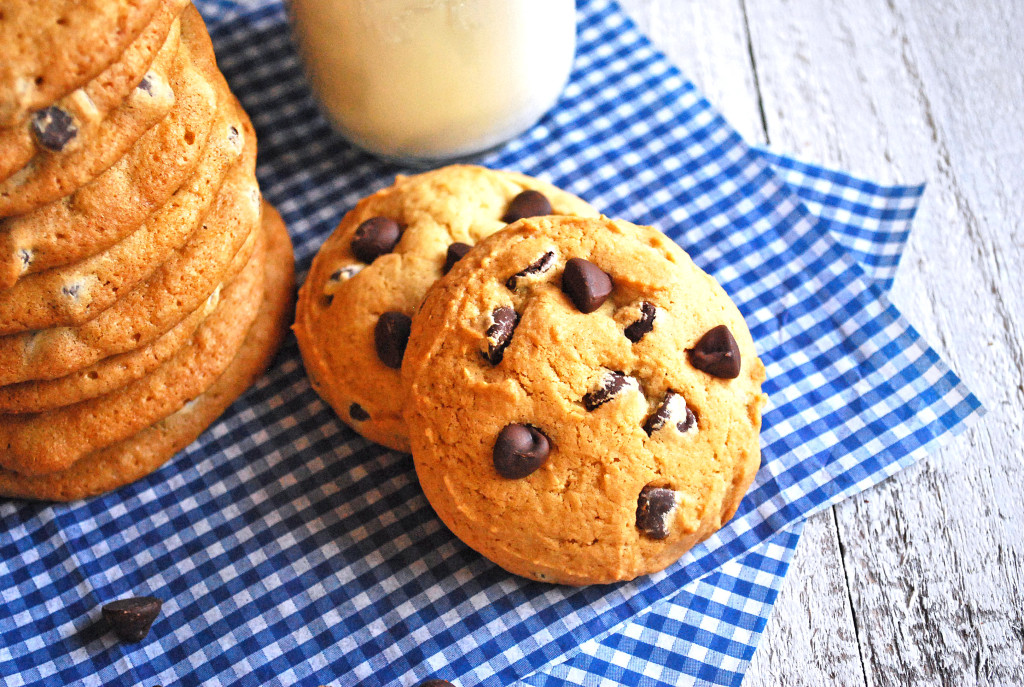 Too bad Captain Kidd didn’t survive to see these cookies . . . because I bet these little hidden treasures would have made his day.  Give them a try– you’ll be glad you did!
You did it.  And I’m just so proud of you.