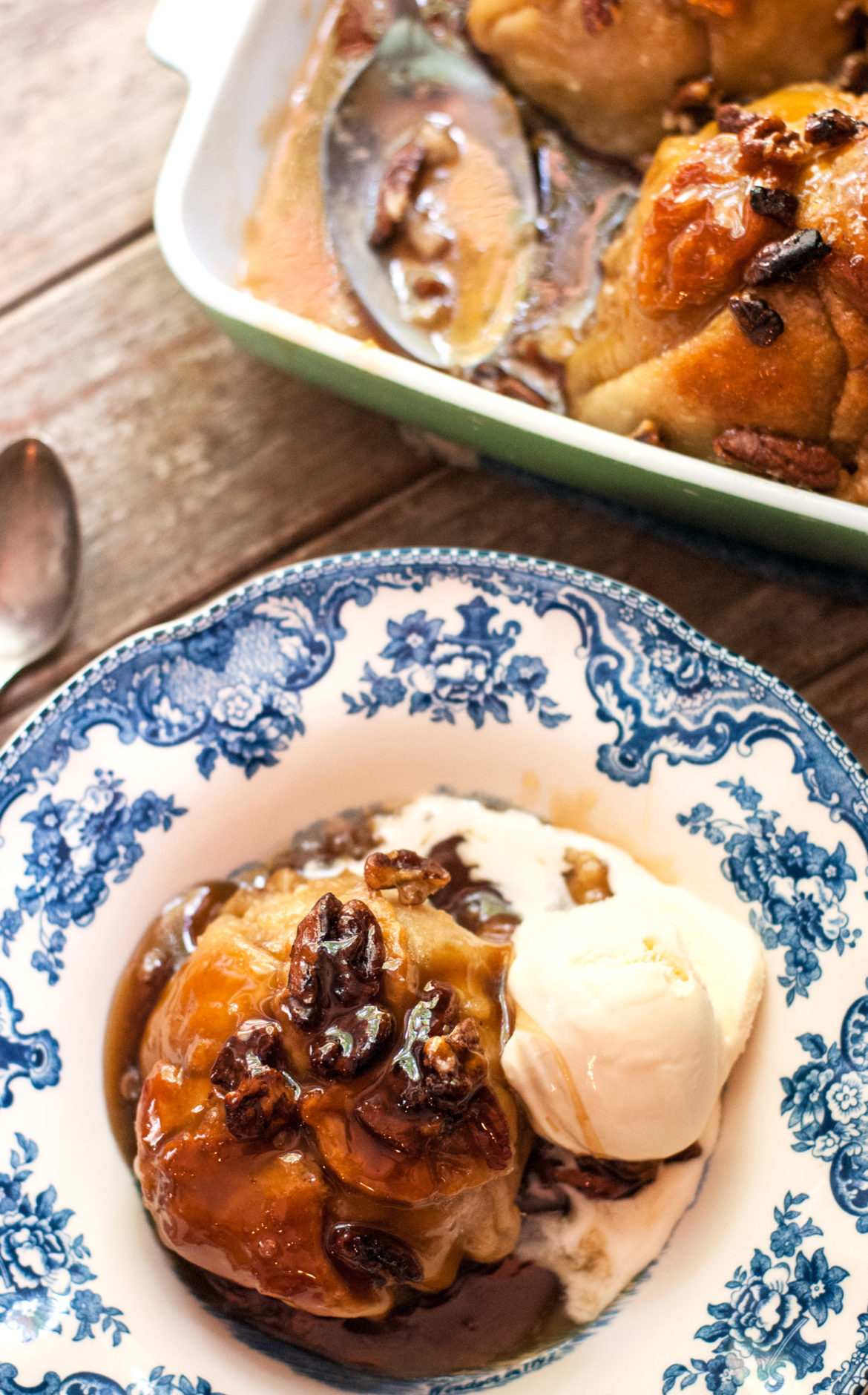 The other day I stopped and started thinking– how long has it been since I tasted a real, old fashioned Apple Dumpling?  Apple dumplings are kind of a lost art– a treasure of our grandparents that many people today don’t want to mess with because they take a little time, and a little care to create.  But the first time you taste one of these buttery, flaky desserts with the divine caramel sauce kissing their cute little apple faces, you’ll be hooked.  Your grandma was right– they are worth the trouble.

What are we waiting for? Let’s do this!

(Adapted from many recipes I have tried over the years)

8-10 tbsp. icewater, just so that dough holds together in moist clumps, but is not wet

To make the crust, whisk together flour and salt.  Cut in chilled shortening with a pastry blender

.  Use a fork to toss white vinegar into mixture.  Gradually add in icewater just until dough comes together in soft clumps.  Wrap in plastic wrap and chill dough ball for several hours or overnight.

When your dough is chilled, peel and core your apples.  Place 1 tbsp. of softened butter into the core of each apple and sprinkle with cinnamon/sugar on all sides and in the center.  Divide dough into 4 pieces and roll into 10″ squares.  Place the prepared apples one at a time into the squares, using water to get the edges to stick as you wrap the apples. Decorate tops of apples with leaf cutouts (using a 3D cutter like this here

To make caramel glaze, bring all glaze ingredients to a light boil for 5 minutes.  Pour glaze over dumplings, reserving about 1/4 cup of glaze for drizzling later, if desired.  Bake dumplings at 400 degrees for 40-45 minutes, basting with sauce every 10 minutes, until golden brown. 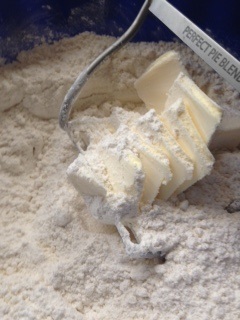 The basis of any good apple dumpling is a good pie crust! 🙂  If you’re intimidated to make homemade pie crust, you can always store bought. But I’m telling you . . . I was afraid of making homemade pie crust for years, and if I can learn how, then you can, too!. 🙂  Come on. I’ll show you how to do it.  You’ll be a pro in no time. 😉

To make a basic pie crust, start out by putting your flour and salt into a bowl and whisking everything together.  What makes pie crust flaky is keeping everything cold and handling the dough as little as possible.  I never make pie crust, biscuits, or scones without this pastry blender

.  I can cut my butter or chilled shortening into the flour with just a few quick pushes of the pastry blender, which keeps everything nice and cold.  SOOO much easier than using a fork or 2 knives to cut in the shortening. Whew.  Night and day difference.

Next, use a fork to toss the white vinegar into your shortening and flour mixture.  The vinegar just helps keep everything especially flaky in the finished pie crust.  Gradually add in icewater, using a butter knife to “cut through” the dough, without stirring or heavily mixing it, just until dough comes together in soft clumps.  Don’t worry if it seems like little clumps, rather than a whole dough ball.  I used to always add too much water, and that made my pie crust tough when I had to add too much flour to roll it out.  Just stick with moist crumbs that barely stick together, and you’re good.  Wrap the crumbs that stick together in plastic wrap and chill dough ball for several hours or overnight.  The “chilling” step is what does the magic.  When you unwrap the dough, it will be ready to roll.  Literally.  Don’t skip the chilling step. 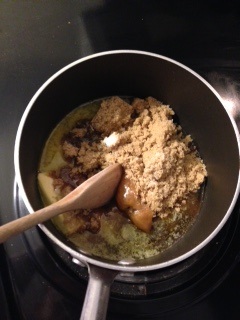 Usually I make my crust ahead of time (or even the night before if I’m feeling ambitious), and then it’s ready to go when I have time to assemble the apple dumplings.  I find that it takes roughly the same amount of time to preheat the oven as it does to make the sauce and wrap my dumpings, so here’s what I do.

You’re so smart.  I love working with you. 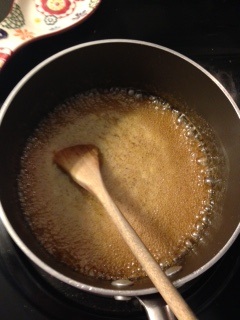 To make the glaze, just put all the glaze ingredients together in a saucepan, covered, stirring occasionally.  Let it simmer (lightly bubble/boil) for 5 minutes, and then turn off the heat.  It will stay warm enough to pour, in case you need some extra time forming your dumplings.  You know– in case, like, your kids come into the kitchen whining for ANOTHER snack and decide that although they are starving, they are NOT starving enough for an apple. Maybe chips. But not an apple. You have an argument for 5 minutes about the benefits of apples, and it delays your dumplings. You know– something like that. 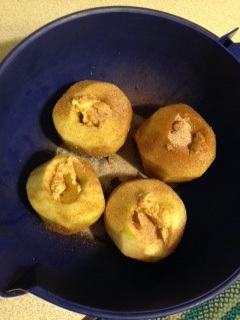 For my apples I peel and core 4 Granny Smith apples.  You can use a corer

, or just pry away at your core with a paring knife.  Just get all the seeds and that scratchy stuff out of the center of the apple. It doesn’t have to be pretty.  We aren’t running a pageant, here, after all.  haha.  Your kids already denied the apples once.  No need to wound their poor apple dignity, again. 😉

Squeeze the lemon juice over the apples and roll them in the juice.  The lemon juice will keep the apples from turning brown, so try to get a little in the centers of the apples, too.  Put a tablespoon or so of softened butter into the center of each apple and sprinkle with cinnamon sugar.  I just let the apples sit there happily while I make their little crust cocoons. Why, oh why can’t I have a cocoon made out of pie wrapped around me, oh so sweet and lovingly?!  :() 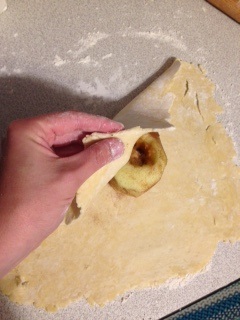 Split the pie dough (which has been chilling in the fridge, waiting patiently) into 4 parts and gently roll out the dough on a lightly floured surface. I shoot for a rough rectangle about 10 inches square for each piece, but again, don’t split hairs.  Just give yourself a nice plop of dough that will fit around your apple.  Put one apple into the center of each dough square, and fold the corner up and over the apple.  Use a little water to moisten the top and “stick” the next flap of dough to the moistened dough.  Keep sticking the dough to the tops of the apples until you have wrapped the whole thing. 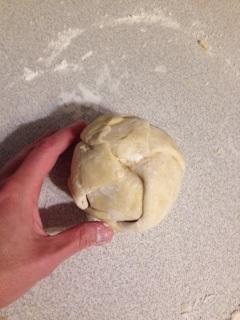 I kind of “squish” the dough together once the whole apple is wrapped.  It just helps the dumpling to be a little more round. 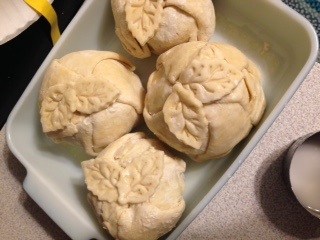 If you want to, you can use the leftover scrap dough to cut out some leaf cutouts

and stick them to the top of the apples with a little extra water.  Just dampen the spot where you want the leaf to be, and stick the pie crust leaf to it.  It’s that simple. 🙂 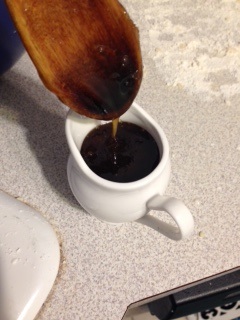 By now your glaze has probably simmered for 5 minutes, so turn the heat off underneath it.  Place your “wrapped” apples into a greased baking dish. You can use a 9″ square pan if the apples are small, or an 11×7″ pan, if you stagger the apples.  Just put them in something where they fit.  They aren’t picky. 😉  Pour the glaze over the pan of dumplings, trying to get all the crust covered with glaze.  I like to save about 1/4 cup of glaze for drizzling over the dumplings later, if I have enough. 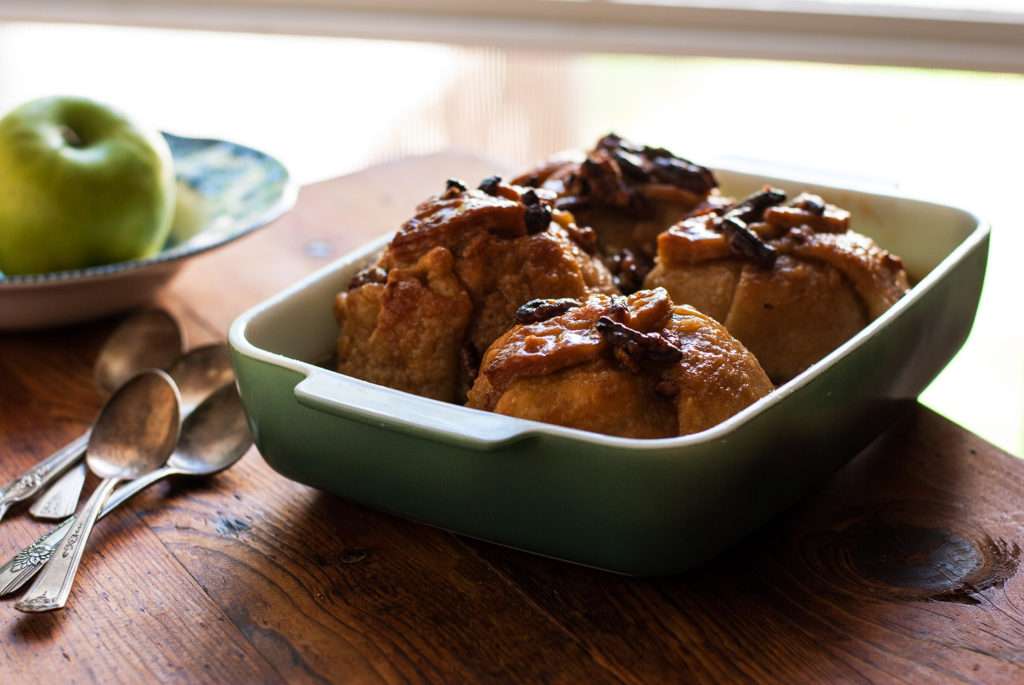 Pop the glazed dumplings into a 400 degree oven for 40-45 minutes, basting with sauce every 10 minutes. 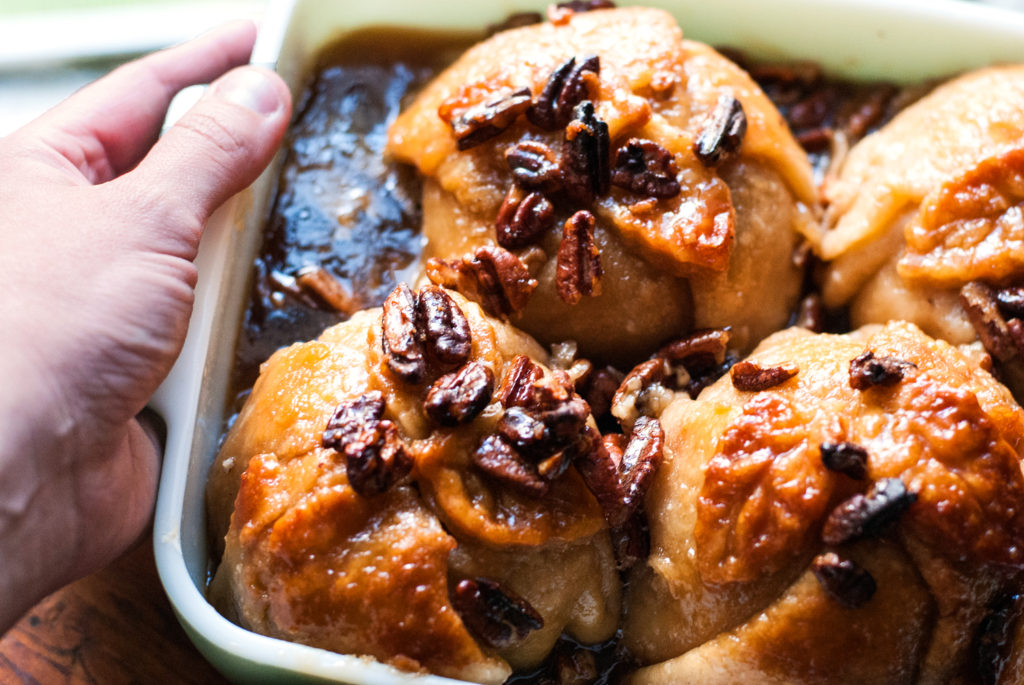 Basting just means that you take a spoon and use the pan sauce to drizzle overtop of the apples, coating them again completely, again and again.  This step just gives the finished crust a gorgeous, golden, caramelized crust.  Each time you baste the apples, the sauce bakes another layer of color and golden brown flavor onto them– like senior citizens turning into crisp little nuggets on a hot Florida beach.  😉 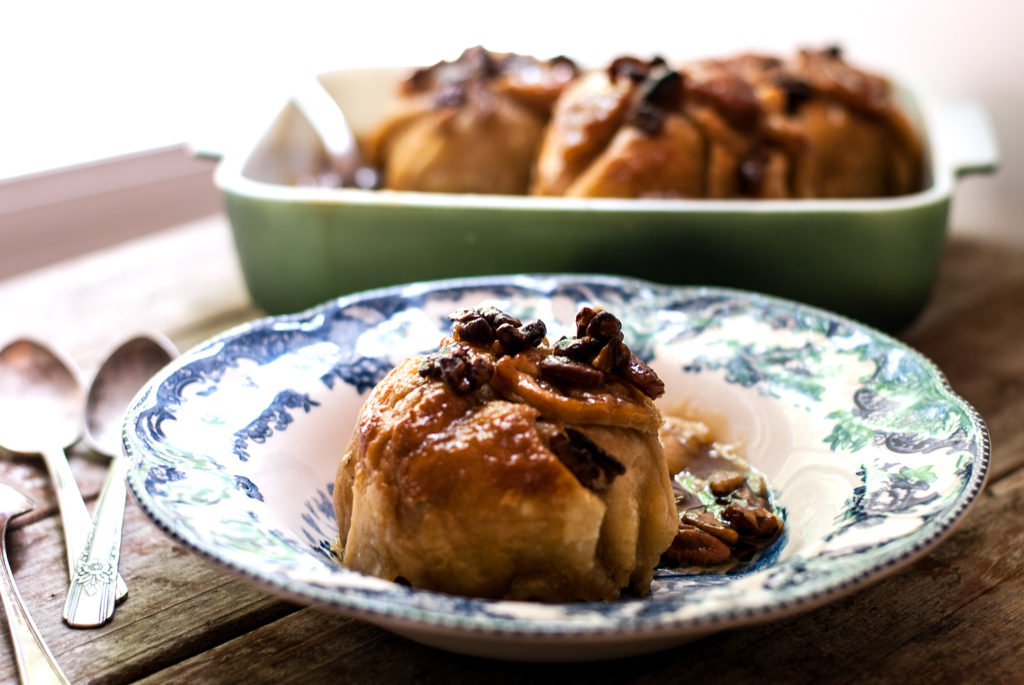 After about 40-45 minutes, your crust should be golden brown, and the sauce should be bubbling and thick.   And because you were such an obedient pupil, you basted the dumplings every 10 minutes during baking, so your crust is golden brown and LOOOVELY.  At this point, your apple dumplings are done.  Pull them out of the oven and sniff.  YUMMM. Does that smell good, or what?  I mean, seriously.  We could invent our own fall candle scent. 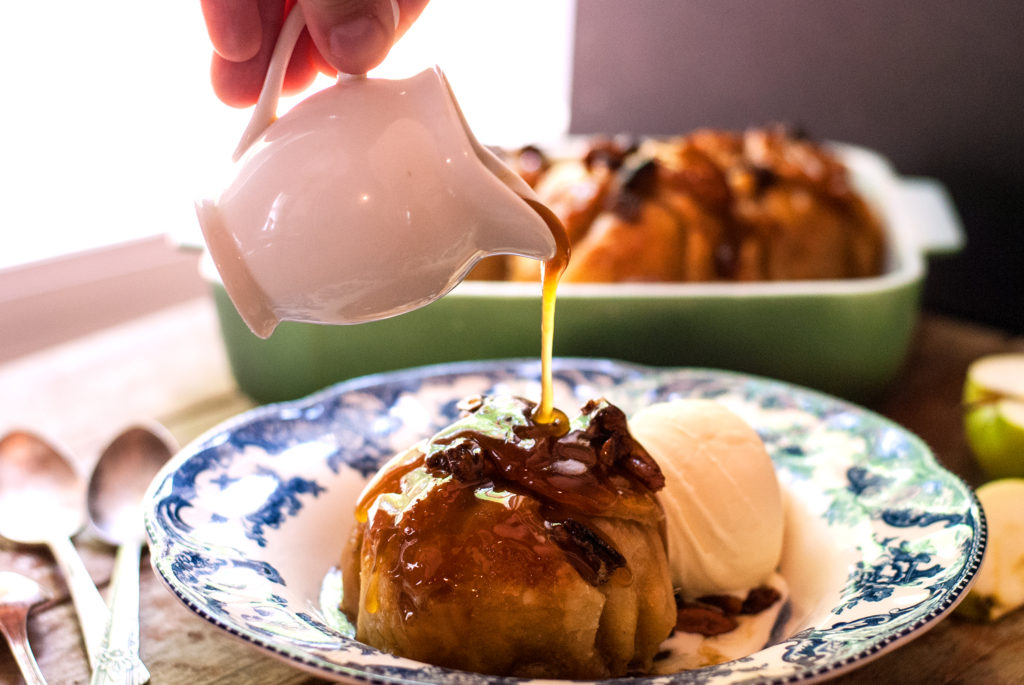 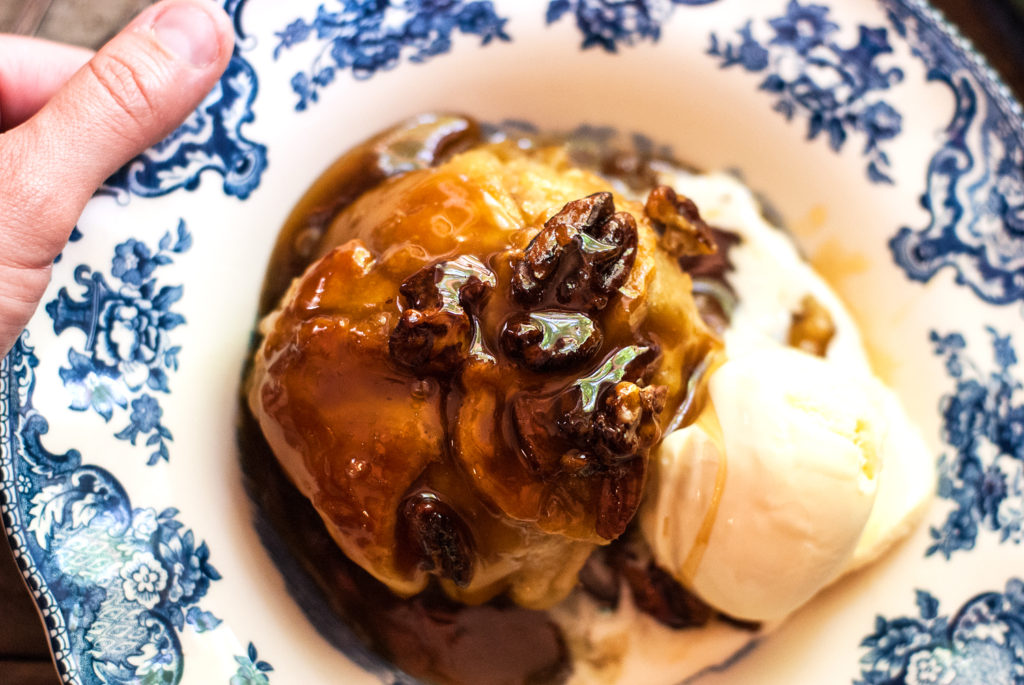 My advice is to dish out these little babies while they are still warm. Smother them in real vanilla bean ice cream and let the cream melt into glorious, caramel loveliness as it kisses the apple dumpling. That’s a relationship of true love, right there.  Heat up your reserved glaze and drown that baby in butter and brown sugar and FLAVAHHHHHH.  “If this is wrong, I don’t wanna’ be right.”  At this point, the only thing you have to decide is . . .