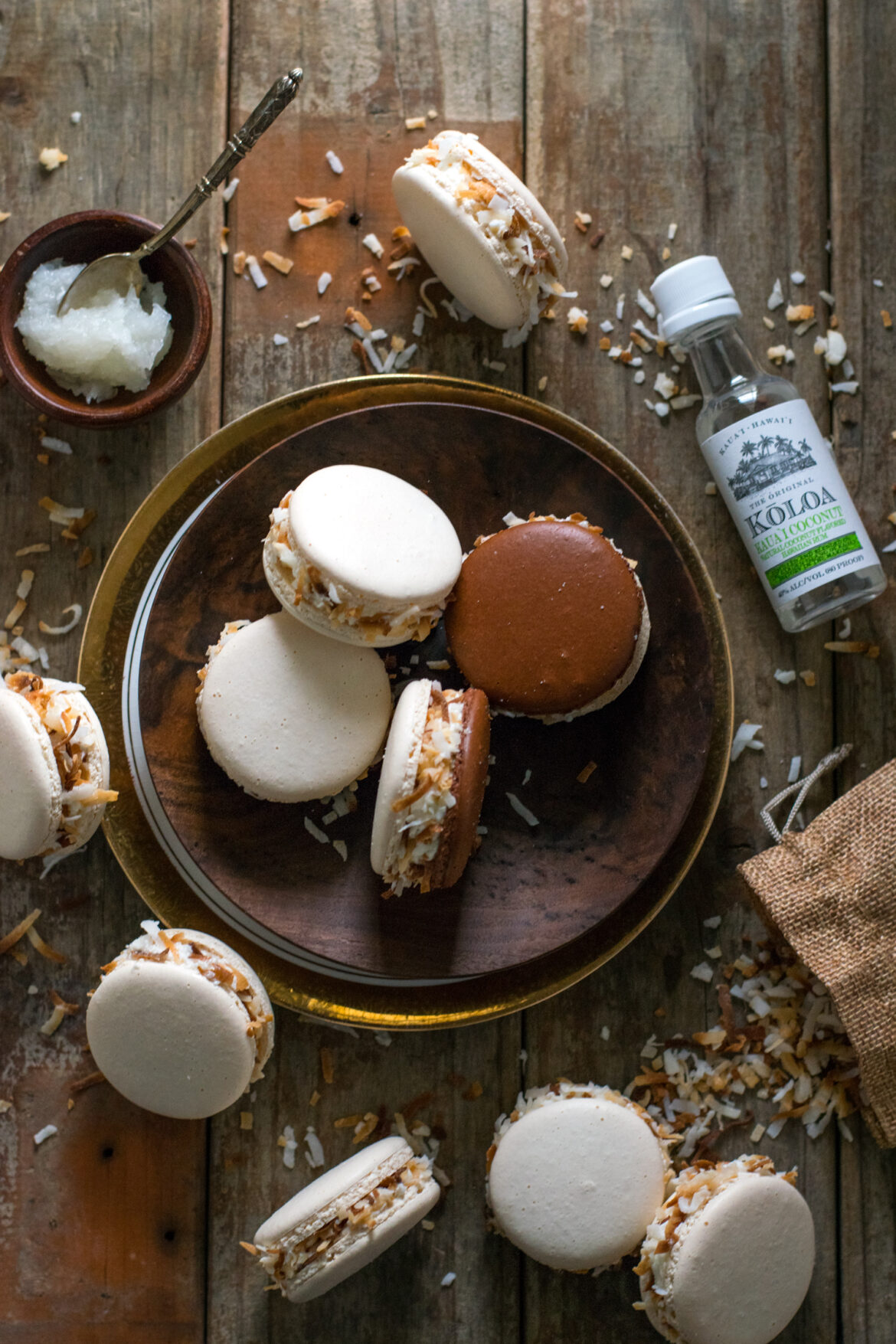 In the middle of winter, I start craving warm temperatures and tropical flavors.  I can’t help it.  I love to be warm.  🙂  These Coconut Rum French Macarons will bring you the tropical flavors of ocean kissed islands, with just enough rum to make you feel that warm holiday glow, without leaving the comfort of your own home.  And who doesn’t love the person who brought boozy desserts to the party?  Exactly.

To make coconut rum buttercream, place your egg whites and sugar together on the top of a double boiler.  If you don’t have a double boiler you can use the metal bowl of your stand mixer over a saucepan with about an inch of boiling water.  Make sure that the water is low enough that it doesn’t touch the bowl on top with your egg whites in it.  Whisk the egg white mixture over the boiling water until the egg whites reach 160 degrees (use a baking thermometer

to make sure you get the temperature right).  When your mixture reaches 160 degrees remove it from the heat and whisk it with the whisk attachment of your stand mixer until it cools slightly (I use ice packs on the side of the mixing bowl to cool the mixture more quickly). When it reaches room temperature, switch from the whisk to the beater attachment.  On medium speed whip the frosting, slowly adding the room temperature butter in pieces.  When you get all of the butter added, whip for several minutes on high speed until your frosting looks like whipped butter (which, technically, it is).  Add in your coconut paste and coconut rum and mix just until combined.  The frosting is now ready to use, or you may refrigerate, covered, for several days (bring to room temperature to pipe before using). 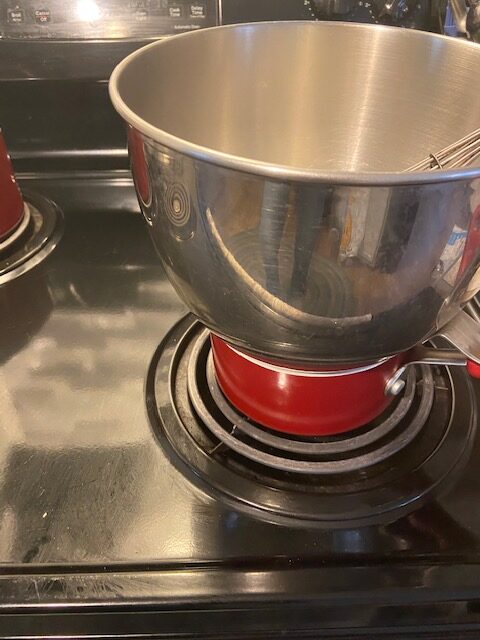 I’d build a big tall house with rooms by the dozen,
Right in the middle of the town.
A fine tin roof with real wooden floors below.
There would be one long staircase just going up,
And one even longer coming down,
And one more leading nowhere, just for show.

When I was a kid I used to smile at this song, imagining what I would buy if I were filthy rich.  I pictured Pacific coast mansions in every color of the rainbow, with matching Ferraris in the driveways . . . little men running all over caring for my gardens and personal horse stables and cars.  But one thing I never pictured in my wealthy dreams was owning a double boiler.

I’m so glad you asked.  Because just for you, I already have my answer prepared.  You’re welcome. 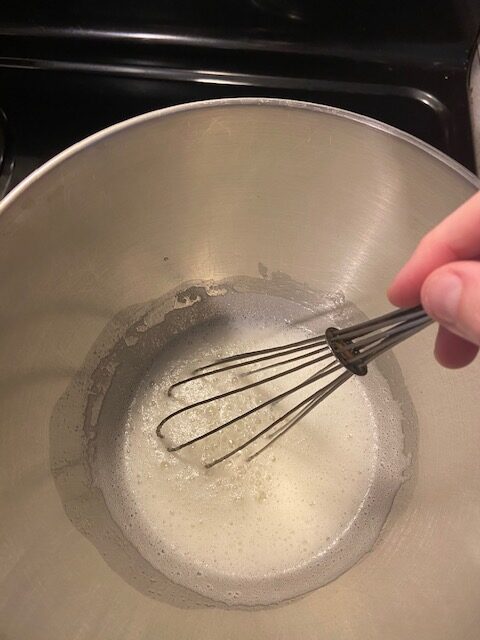 A double boiler is, in a nutshell, two pots together, fixed so that the top pot doesn’t touch the water in the bottom one.  That way you can boil about an inch of water down below, and the steam heats the pot above.  You can get indirect heat that way, and your (usually delicate) ingredients won’t scorch.  So smart. Too bad I wasn’t smart enough to put a double boiler into my list of purchases for my imaginary riches when I was (almost) a rich man.  Oh well.  Hindsight is 20/20.  I’ll remember to add double boiler to my list when I make my next imaginary fortune.  Let’s add one for you, too.  *scratching pen sounds in the background*

For now, it works just fine to use the metal bowl of my kitchenaid mixer overtop of a small saucepan containing 1 inch of boiling water.  If you are trying this trick for the first time make sure that you test it first.  Put the water in your pan and fit your bowl inside.  If the bottom of your mixing bowl is still dry when you take it off then your bowl hasn’t touched the water, and you are good to go. If your bowl is wet then you need to dump a little water out so that nothing touches.

You’re so smart. I love working with you. 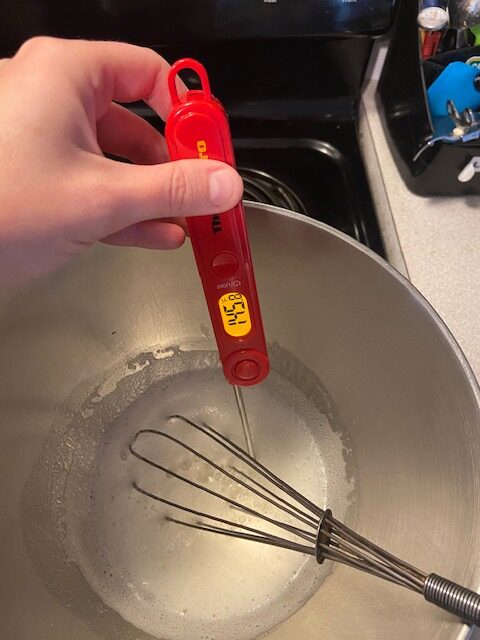 While you are cooking the egg whites over the steaming bottom pot, keep whisking your egg white and sugar mixture so that nothing gets “cooked” onto the side.  Eww.  We don’t want scrambled eggs in our icing.  Keep whisking, and every so often take the temperature of your baby, er, I mean, egg white.  When she reaches 160, take the bowl off the heat.  She’s DONEEEEEEEEEE!  *dinner bell rings in background*

This next part is really cool, and because you, like me, forgot to request a double boiler with your imaginary fortune, you can use the mixer bowl you cooked your egg whites in to also WHISK your egg whites in.  You’re seriously so smart.  Smarty pants.

I put a couple sandwich bags of ice cubes alongside the bowl (held in place with a knotted dishtowel) to cool the mixture faster.  Use your whisk attachment and whisk this hot egg white mixture until it gets nice and fluffy and forms stiff peaks that are shiny and glossy and LOVELY. 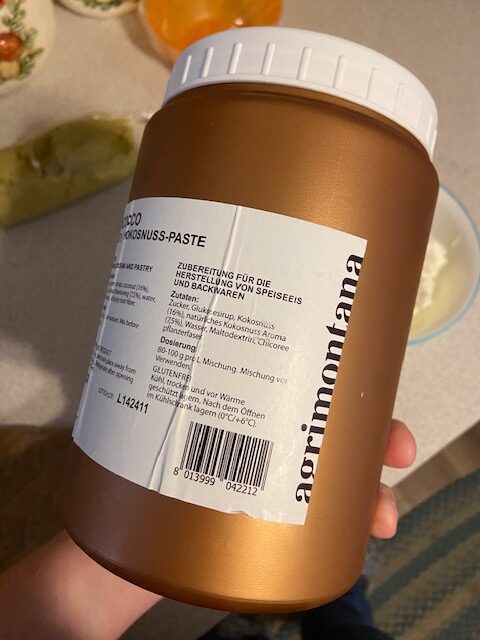 When you have stiff, glossy peaks, go ahead and remove your ice packs.  Switch from the whisk to the beater attachment of your mixer, and with the mixer going at medium speed slowly add in your room temperature butter, a chunk at a time.

While you do this, think about your evil 8th grade gym teacher who called you chunky.  And add another chunk.  Smile an evil smile.  Giggle an evil chuckle.  Very nice.

Whip your mixture for about 3 minutes– until it looks, well, like whipped butter (which is exactly what it is).  It should be light and fluffy and gorgeous– not separated.  Keep mixing until you see the fluffy.  When your buttercream is finished it’s time to add *conga drums play in background* our JUNGLE SEASONINGS.

Well, technically it’s coconut, but JUNGLE SEASONINGS sounds much more adventurous.  There are multiple types of coconut flavorings which you could use– you could use some toasted coconut extract (get the toasted kind rather than plain coconut extract– trust me), or a little instant coconut cream pudding mix.  You could use toasted, real coconut.  But the best flavor choice of all is coconut paste.  Say wha????

Coconut paste, is, basically, the inside of a mounds bar.  It is sweet and coconut-y and DEEEELICIOUS.  It is also concentrated so it doesn’t take very much. If you microwave the paste for 10 seconds or so before adding it will soften it slightly (without warming it, and by proxy, your buttercream) so that it will more easily mix in.  I am using the seasoning of the gods, Agrimontana brand (professional gelato ingredients from Italy). Divine I tell you. Divine.  Mama MIA!!!! 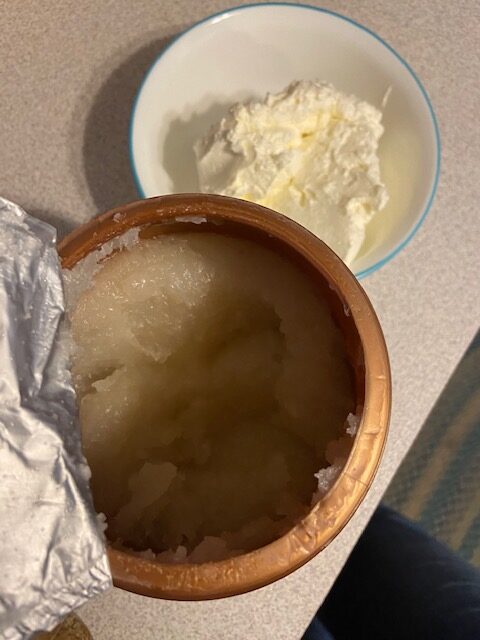 Open the jar and take a sniff.  Mmmm.  I can almost feel Hawaiian flowers dancing past my nose. To smell this stuff is to smell tropical fruit, feel the warm sand between your toes, and listen to the rush of the waves in the glow of a golden sunset.

Get the better quality coconut paste.  You won’t regret it. Trust me. 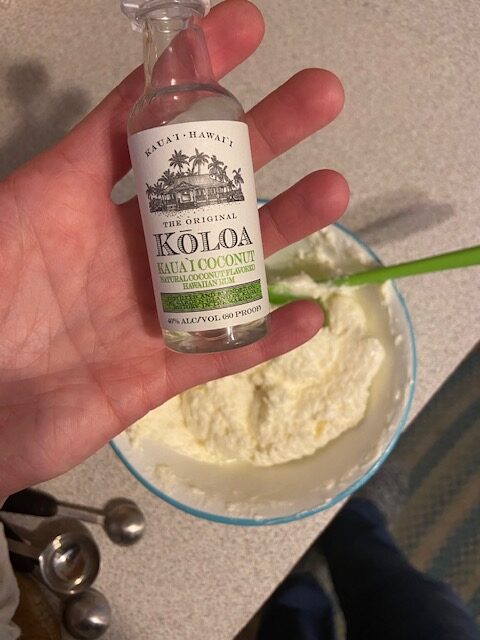 Next is your rum.  If you prefer not to use alcohol, you can use a tsp. or so of rum extract instead.  I am using Koloa coconut rum– its coconut essence and that little shimmer of rum in your sweet coconut cream really takes this macaron from good to “holy cow who brought THAT and can I get the recipe???” when you go to your next holiday get together.

Liquid and oil (AKA buttercream) don’t like to mix, so add your liquid slowly, mixing as you go.  You might have noticed that I have a range of tbsp. to add into the recipe– that’s because you might not be able to get as much liquid mixed in and you might also want your taste to be a little less strong (as given the recipe provides a delicate shimmer of rum, but is definitely not overpowering).  You don’t want any liquid seeping out to make your macaron shells soggy.  Add slowly.  That’s the key. 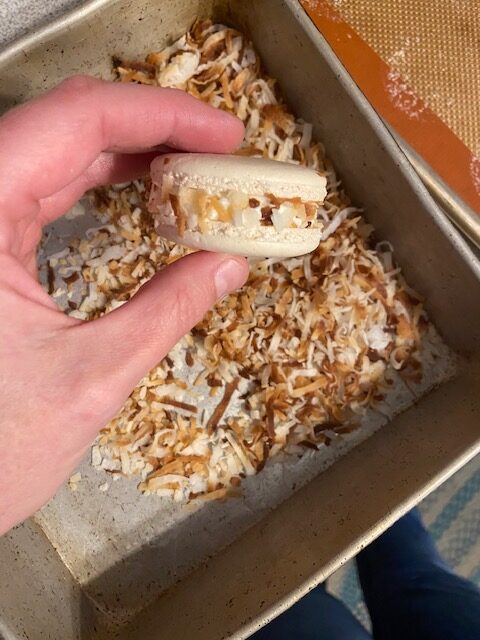 Once you get your Coconut Rum buttercream shaking and baking, go ahead and pipe circles of filling onto your shells.  Roll the edges in toasted coconut.  To toast coconut just spread a handful of sweetened dried coconut shreds on a baking sheet.  Bake for a few minutes at 350 degrees, then take the tray out of the oven, stir the coconut (so that the darkened edges are mixed into the center), and bake for a minute or two more until it looks, well . . . toasty.  Toasting coconut makes the whole house smell good.  Mmmmm. 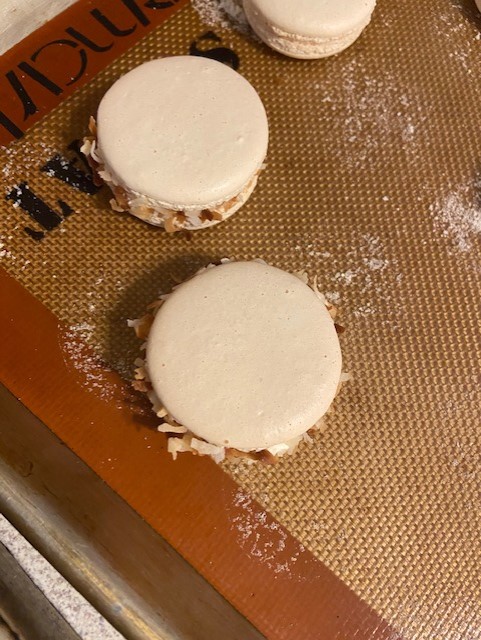 Aren’t they adorable?  Look at their little furry mustaches.  Awwww. 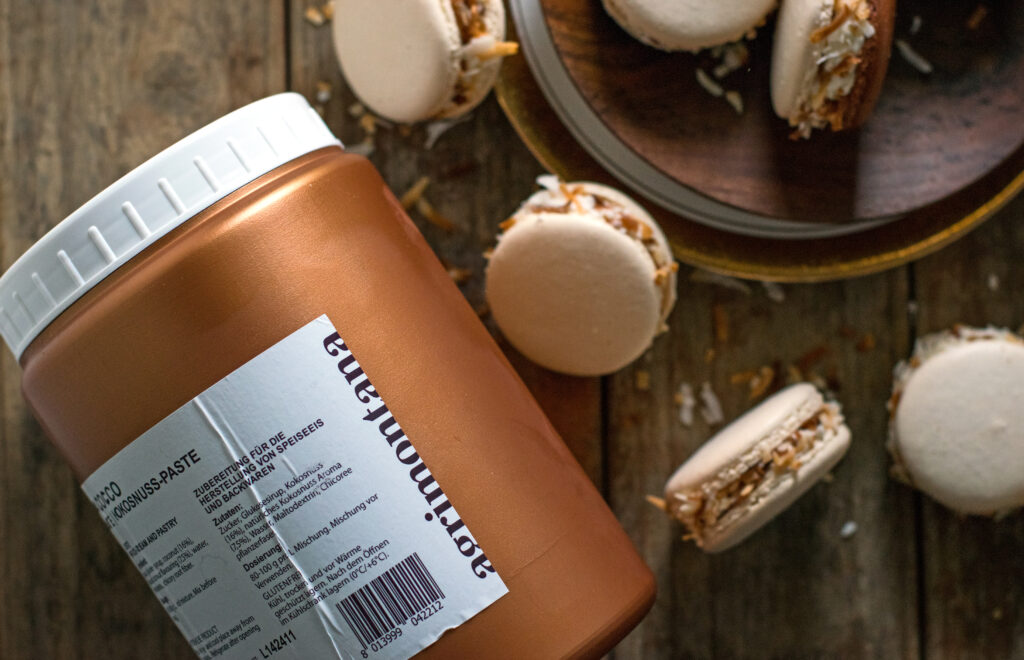 The macarons are still soft at this point, so carefully cover them with plastic wrap and let them chill out in the fridge overnight. 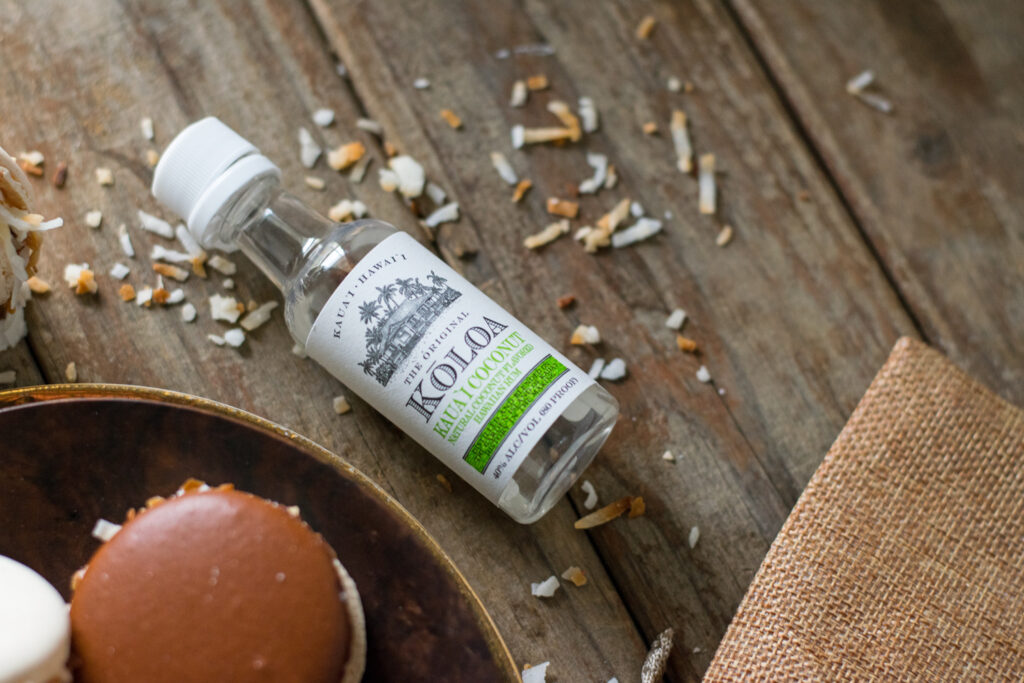 Yes, the best of us need a chill break now and again so that we can be our best, and macarons are no exception.  You might want to turn on Netflix for them too.  They are at a good part of The Crown.  Just don’t tell them they are the movie snacks, or they might not show up. 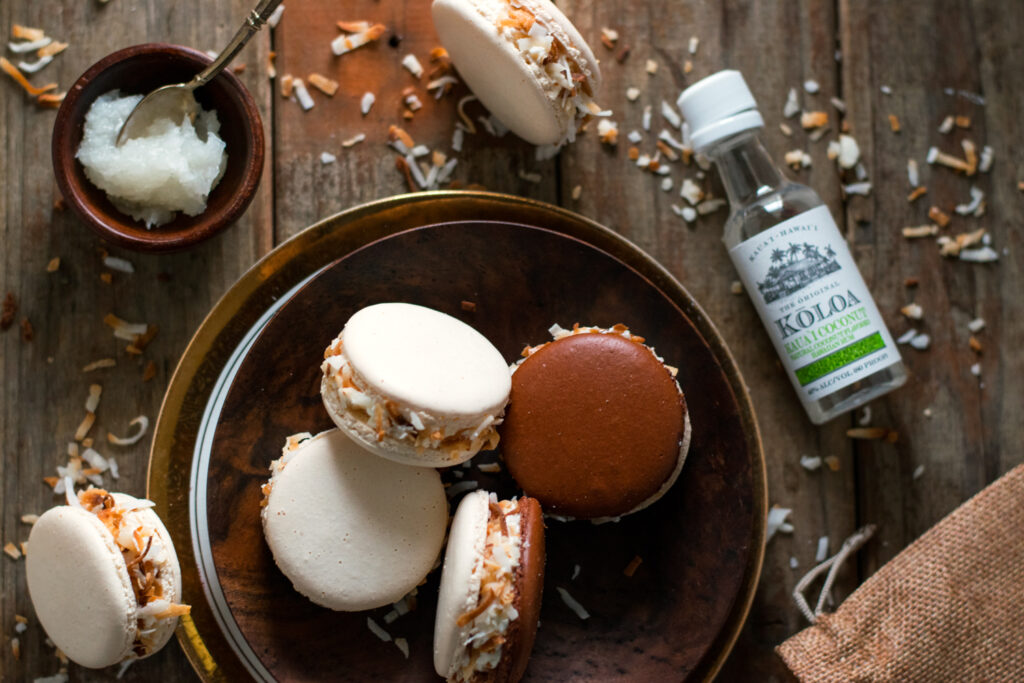 After they have rested in the fridge overnight, the macarons should be the perfect, nougat-like consistency when you bite into them.  You will get that amazing crunchy texture from the toasted coconut, the shimmer of rum, and the delicious, sweet earthiness of the coconut paste.  You will probably close your eyes and say “MMMMMM” from somewhere deep within your soul, but that’s just an educated guess. 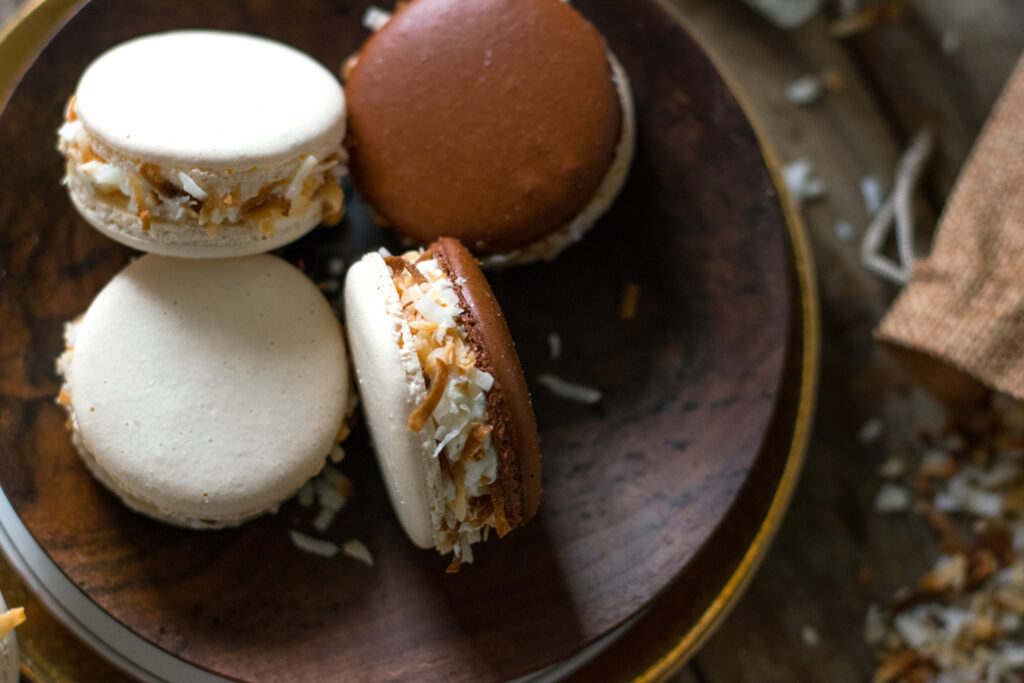 But no matter what your reaction, I bet that you (and everyone else you share them with) will be looking for seconds. 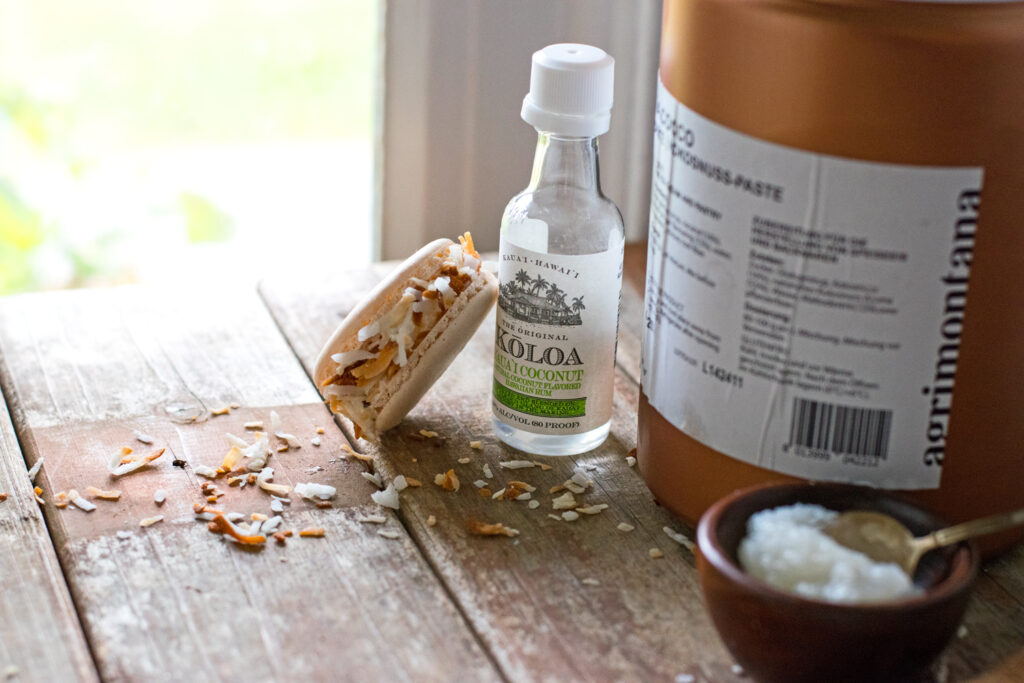 And, thankfully, you were clever enough to bring them.  You smarty pants, you.