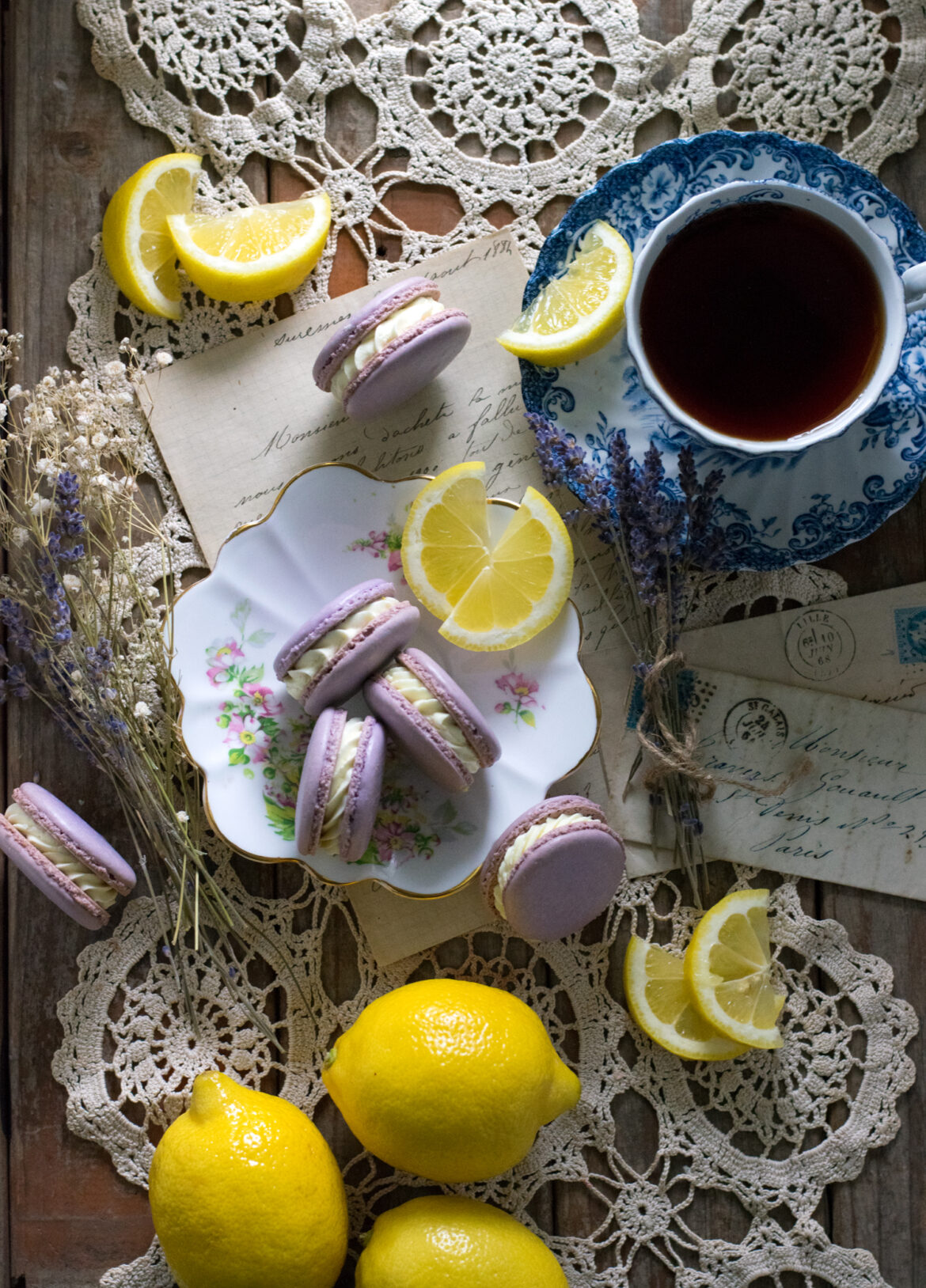 What could be fresher than the juicy zest of a lemon, kissed with the breath of sunny Provence and a bouquet of sweetly smelling fresh lavender?  I think that Lemon Lavender French Macarons may be just what the doctor ordered.

To make Lemon Lavender buttercream, place your egg whites and sugar together on the top of a double boiler.  If you don’t have a double boiler you can use the metal bowl of your stand mixer over a saucepan with about an inch of boiling water.  Make sure that the water is low enough that it doesn’t touch the bowl on top with your egg whites in it.  Whisk the egg white mixture over the boiling water until the egg whites reach 160 degrees (use a baking thermometer

to make sure you get the temperature right).  When your mixture reaches 160 degrees remove it from the heat and whisk it with the whisk attachment of your stand mixer until it cools slightly (I use ice packs on the side of the mixing bowl to cool the mixture more quickly). When it reaches room temperature, switch from the whisk to the beater attachment.  On medium speed whip the frosting, slowly adding the room temperature butter in pieces.  When you get all of the butter added, whip for several minutes on high speed until your frosting looks like whipped butter (which, technically, it is).  Add in your flavorings and mix just until combined.  The frosting is now ready to use, or you may refrigerate, covered, for several days (bring to room temperature to pipe before using). 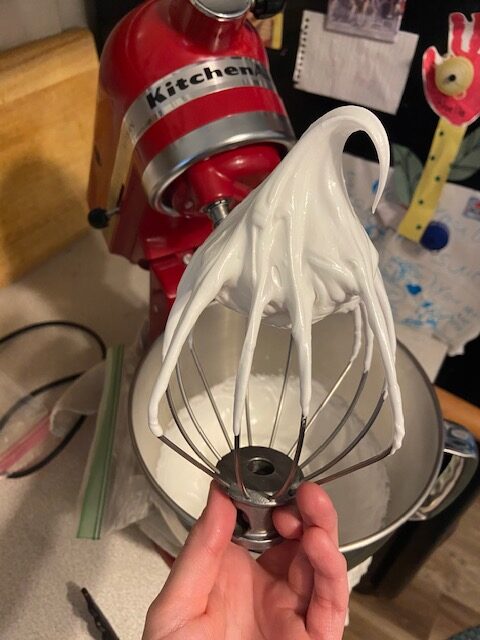 If you are new to macaron making please check out my much more detailed post here, for macaron beginners.

Today we are mostly going to be focusing on the most delicious part of the macaron– the filling! 🙂  I think that often people focus on the shells so much because they WANT THESE MACARONS TO BE PRETTY, DARNIT, and they completely forget the center.  The center is the flavor of the macaron– the shells actually draw their flavor out by kind of absorbing it from the filling (you mean they suck out their essence???  Where is Stephen King when we need him???).

Ahem.  Trust me on this.  Filling matters.  Today we are going to be making a Swiss Meringue Buttercream, a little trick taught to me by my friend Nancy.  I used to find buttercream disgustingly, cloyingly sweet.  But Swiss Meringue is kind of like a gigantic marshmallow, instead of a big bite of butter.  It’s a lot lighter and not as sweet, allowing the fruit flavors to shine through.

*Shine on Harvest Moon* plays mysteriously in the background . . . 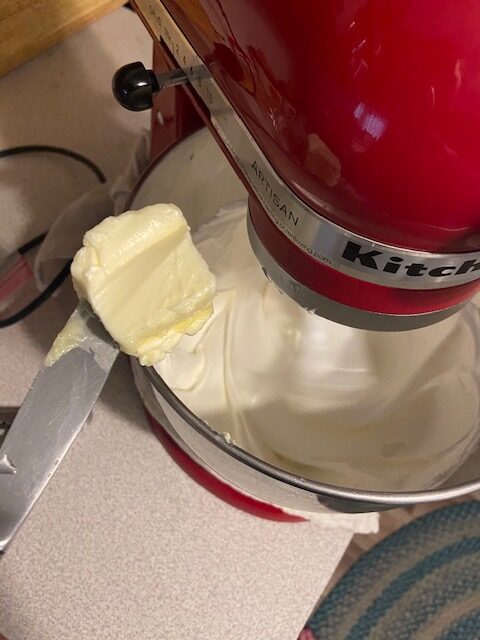 A lot of people shy away from Swiss Meringue because it takes a double boiler (what the heck is that?) and requires a cooking thermometer, boiling hot liquids, and a stand mixer.  It also requires a PhD in chemistry, but don’t be phased.  It’s not as hard as it sounds.  (I’m just kidding about the chemistry thing).

You will need your butter to be room temperature though before you use it (take it out of the fridge about 1/2 hour before you need it– it will be good to go).  As far as this mysterious double boiler situation, first of all you need a degree in rocket science and a job at NASA . . .

I’m just kidding.  I use the metal bowl from my kitchenaid mixer and place it over about an inch of simmering water in a saucepan.  It works great because when my mixture is done I can move that bowl right over to my mixer without transferring anything.  You’re so smart. I love working with you. 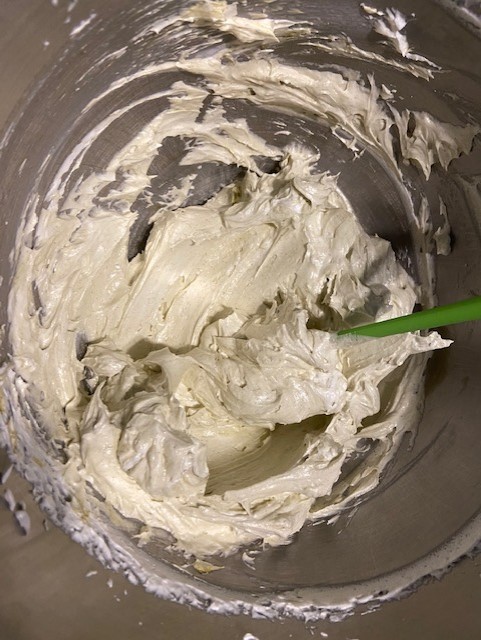 Basically, you want to slowly bring the temperature of the egg white and sugar up to 160 degrees.  You will whisk as the mixture heats up (every so often in the beginning, and then more constantly toward the end as the mixture gets hotter).  When your baking thermometer reads 160 degrees you can take your bowl off the heat and put it back on your mixer.  I use ice packs along the side of the bowl as the mixture whips to cool it down faster.  Slowly add your room temperature butter, a little at a time, and whip until you get something that looks like this– whipped butter.  This is actually a photo of pistachio buttercream (because I forgot to get an in progress photo of the lemon lavender), so don’t mind the slightly pistachio color.  Yours will be whatever color your butter was. 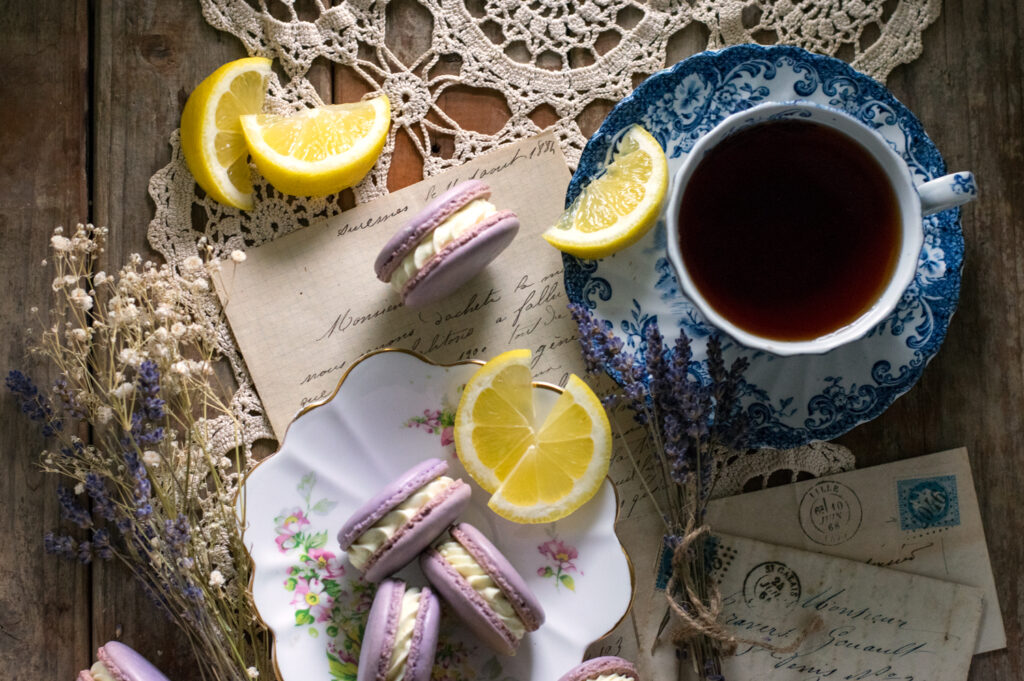 At this point you can cover up your buttercream (which currently is kind of a blank slate, without flavor yet) and leave it at room temperature for a day or so.  If you don’t want to use it right now you can also refrigerate it for up to a week (but it will need to come to room temperature and be re-whipped before using it, to get the silky texture back again). 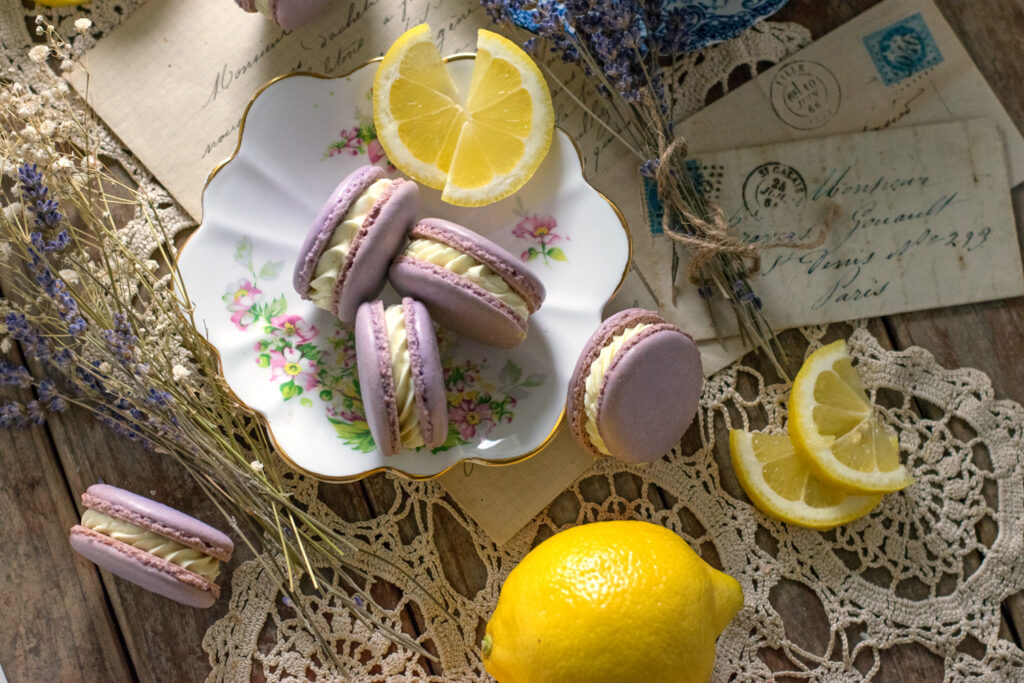 Swiss Meringue Buttercream is a wonderful vehicle for almost any flavor because it has such a silky smooth mouthfeel.  Yes, “mouthfeel” is a real word.  There is no other way to describe it– that all over silky feeling in your mouth when you eat this.  It’s like a spa day for your tongue.

Now let’s talk flavors.  Yes, you can cop out and use vanilla extract or something else equally as . . . well, as vanilla as that.  But if you really want to kick up your macaron game, then you need some seriously good flavorings.  Generally macarons have a circle of buttercream and a center of  something else, such as jam or ganache.  It’s nice to get several awesome flavors when you take a bite. 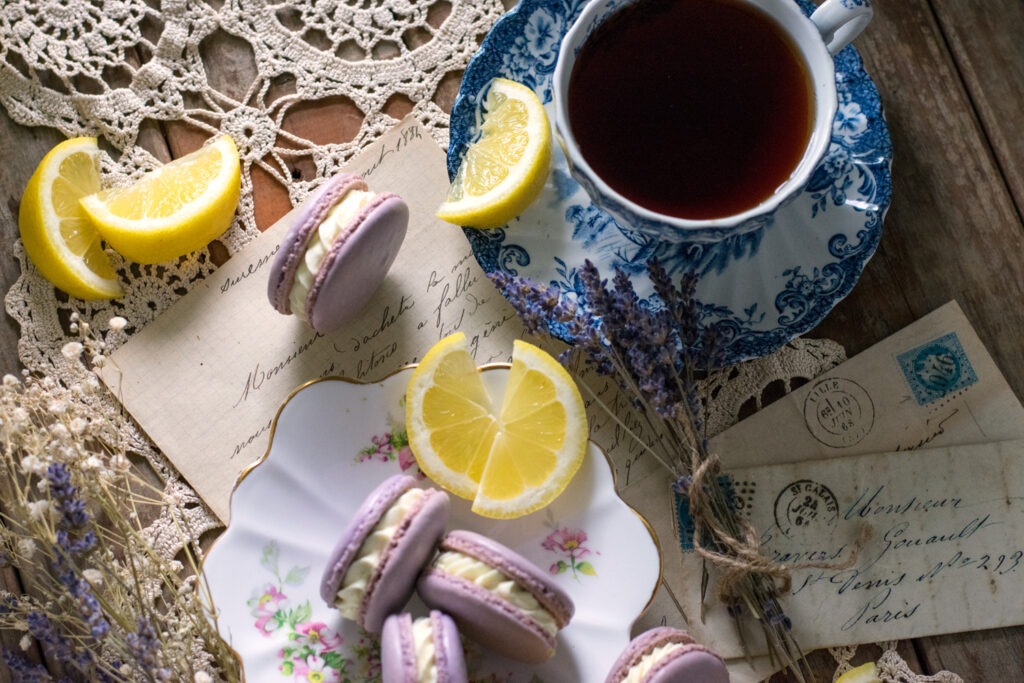 However, when you have two flavors that pair really well together like lemon and lavender, and you want one of those flavors to be a little more muted (hello lavender– we don’t want our breath to smell like grandma’s bathroom potpourri today– thank you very much), then it’s ok to mix them together into a single buttercream.

By far the best extracts I have found are Agrimontana and Amoretti.  I guess they both start with A because they know they belong at the front of the line. Seriously, you can’t go wrong with either of these.  Today I am using Amoretti Lemon Artisan puree, which tastes exactly like freshly squeezed lemon without curdling my buttercream with the natural acidity of a real lemon.  A few drops of essential lavender oil will take care of the kiss of floral without pushing you into candle territory.  Mix this gorgeous buttercream up and pipe it into beautiful little swirls in the center of your macarons.  Gently twist the top shell onto the swirl to make a perfect macaron.  You are so talented.  I love working with you. 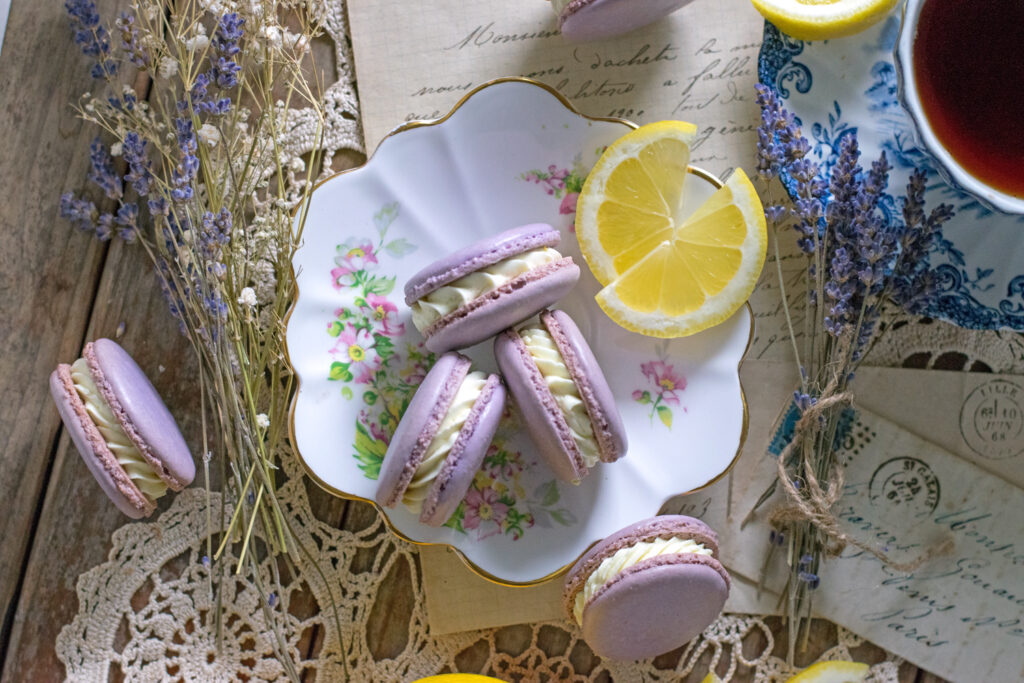 Refrigerate these little beauties, covered, overnight if you want them to be that perfect “nougat” consistency that macarons are supposed to be.  But if you don’t care about any of that, have one right away.  The filling will squish out into a delightful mess that you can lick off your fingers and call it “testing the recipe.”  You’re such a martyr, but someone has to do it.  *sneaks another one.

Have a tea party with the kiddos in the yard, under a shady tree.  Maybe make some lemonade and use the fancy teacups.  Hold up your pinkie fingers while you drink and call each other “dahhhhling.”  Laugh and enjoy it.  That’s what summer is all about.