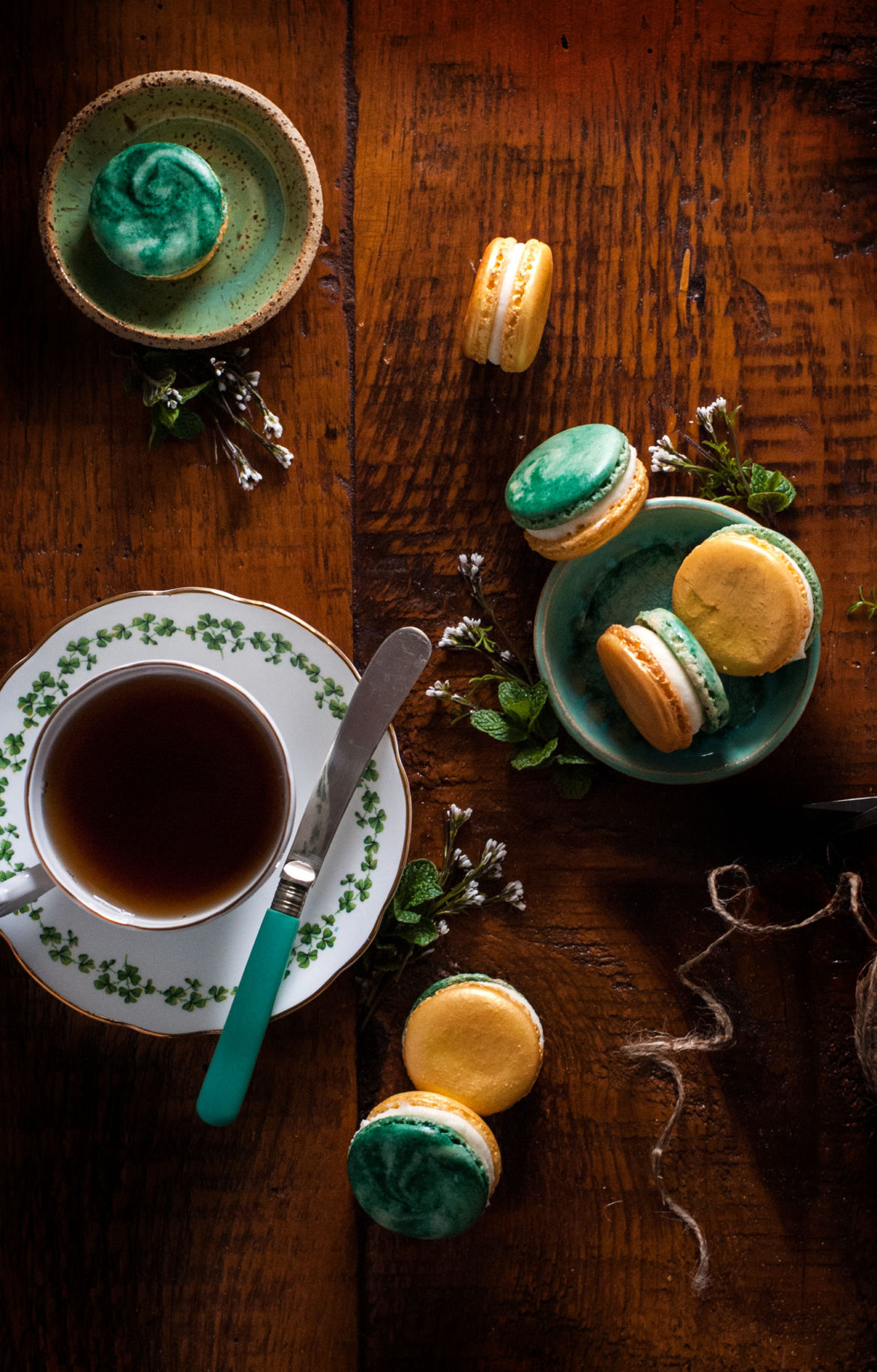 Well, I had a bit of a hard time deciding what to call these.  Irish Macarons?  TRAVESTY!  These are FRENCH macarons (not macaroons), thank you very much.  I think they would turn up their little French noses at being associated with the land of Guinness and anger.  Green macarons?  Yes, but they are more. They are GOLD and green.  Notre Dame macarons?  Eh.  I don’t watch college sports.  Their center is white chocolate, but “white chocolate macarons” sounds boring.  So since I had a “bit ‘o trouble” naming them, and it is almost St. Patrick’s Day, I decided to go with Bit ‘O Green French Macarons.  I hope you love them, whatever you call them 😉

until the mixture is well combined.  Sift your almond flour/powdered sugar through a sieve and throw away the pieces that are too large to pass through the sieve.  When the whites have whipped into stiff peaks, fold the almond/sugar mixture into the whites gradually and carefully until they reach proper “macaronage.”  Place 2-3 drops of gel food coloring into the batter and swirl gently with a toothpick to marble before carefully pouring into a piping bag.  Pipe meringue circles onto a silpat

, using a template, if desired, and slam the cookie sheets several times on the counter to dislodge air bubbles.  Allow circles to dry for 20 minutes before baking at 300 degrees for 20 minutes, one sheet at a time, in the center of the oven (move oven racks, if necessary).  Do not open the oven until the 20 minutes are up, and use an oven thermometer for best results.  When your macarons are done they should feel “firm on their feet.”  If the macaron shells are soft or crack when gently touched, bake for 2 more minutes and test again until they are firm on their feet.  After baking, remove entire silpat to cooling rack and allow shells to cool, completely, before removing them from the silpat.

To make ganache filling, warm cream over low heat, until it has small bubbles along the sides (but has not boiled).  Stir in white chocolate chips just until melted.  Allow warm ganache to chill in the refrigerator until it reaches the consistency of caramel sauce.  Whip with the whisk attachment of your mixer until the ganache is fluffy and then chill again until it reaches a pipeable consistency.  Fill cooled shells with whipped ganache and chill finished macarons in an airtight container in the refrigerator overnight.  Shells are perfect after 24 hours of curing but may be stored several days in the refrigerator or up to a month in the freezer. 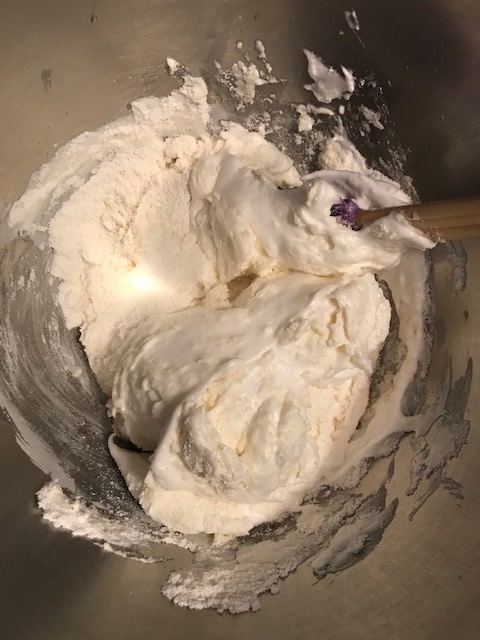 I have talked a lot more in-depth on the trials and devastations of making French macarons here.  By now I’m going to assume that you are macaron making experts, and just show you this cool little trick that I kind of found out by accident.  Did you know that chocolate chip cookies were an accident when someone ran out of cocoa making brownies and tried cutting up a chocolate bar instead?  Sometimes the mistakes are even better than the originals, and I think that this was one of those times. 🙂

Start out by whipping your egg whites, sugar, and cream of tartar in the bowl of your stand mixer until you get nice, stiff peaks.  Incorporate your sifted powdered sugar/almond flour mixture into the egg whites using a silicone spatula until you get the proper macaronage.  Again, see the link above for more detailed directions on how to know when your macaron batter is ready.  But THEN watch what happens next . . . 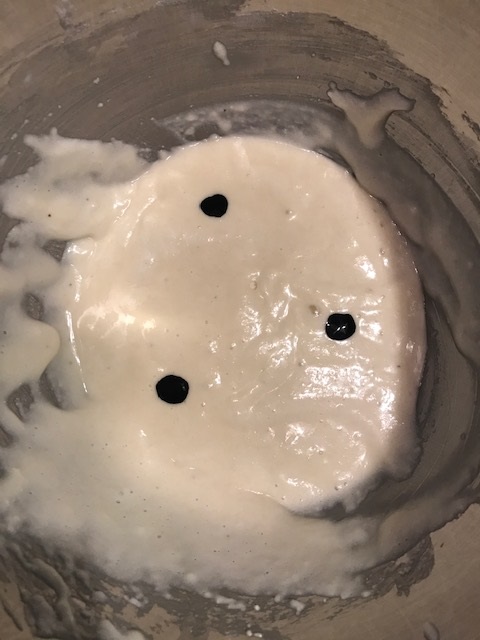 Instead of mixing the color into my batter like I usually do, I tried something different.  I added just a few drops of gel food coloring (looking back I think 1-2 drops would have been enough– three drops made them much darker than I had anticipated). 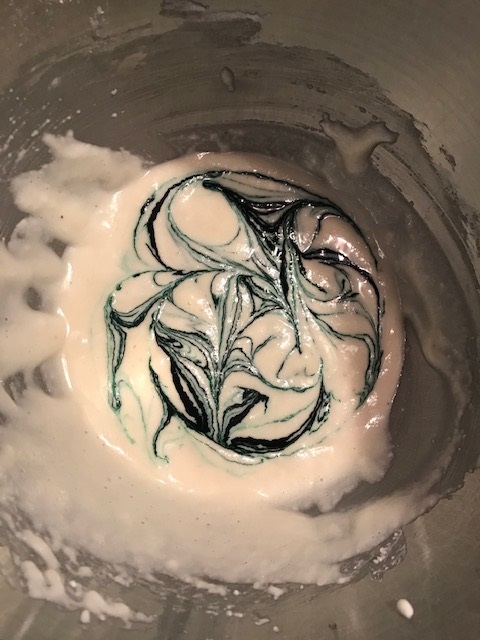 I swirled the drops with a toothpick– just enough to muddle them, not to fully mix.  I was trying to make stripes (which I failed miserably at doing, but it turned out ok in the end :). 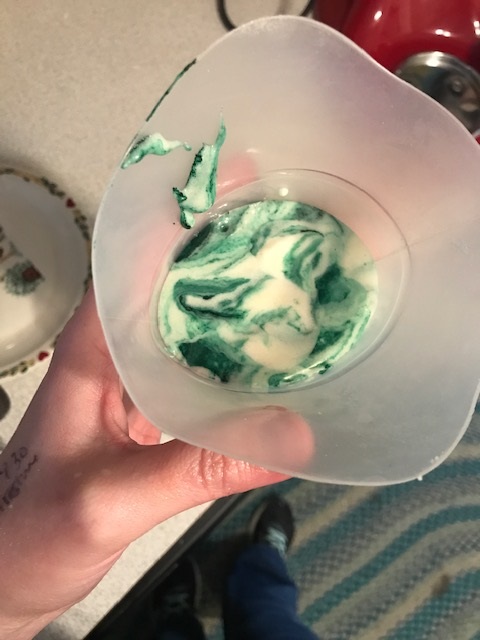 I poured my batter into my macaron piping bag. Looking back, I think if I had done alternating blobs of green and white batter I might have gotten more the look I was going for. HOWEVER . . . 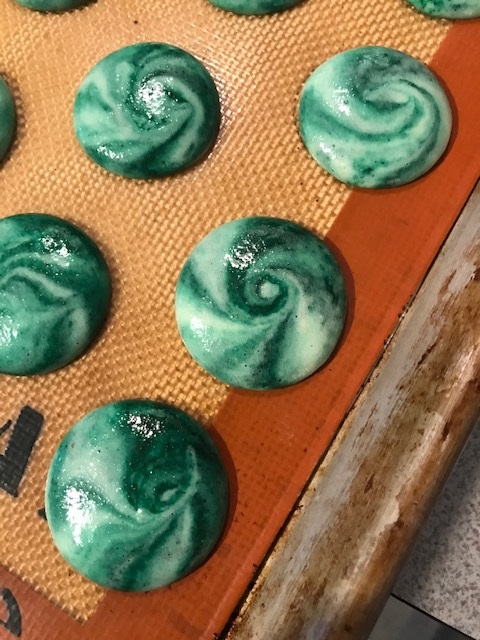 They were super cute!  The teenage macs looked almost looked like little marbles.  Yes, teenage macs.  Well what would you call them?  They aren’t grown up yet so I figured teens. haha.  If they start asking for the car keys, then we need to start getting worried.

I should point out that the way you pipe will determine the shape of your swirls (that is, if you mean to get swirls, which I did not.  haha).  I pipe macarons straight down, then swipe the piping tip around clockwise like I’m making a smiley face as I let go of the batter.  So I got this cool kind of swirl pattern.  I looked at these and thought, “Well, they aren’t stripes, but how pretty!  I think I like these even better than what I was going for!” 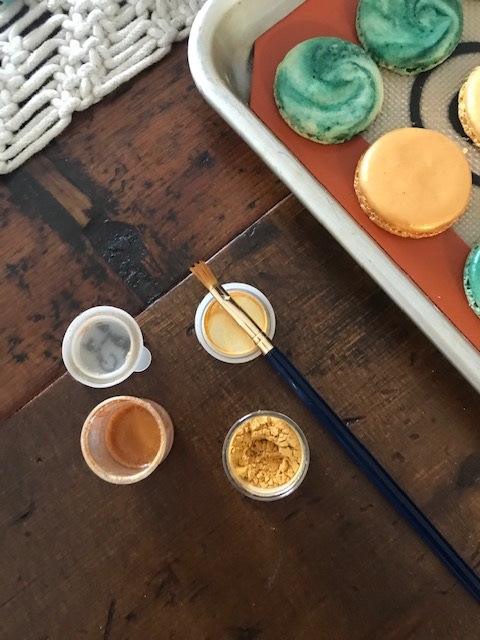 After piping you need to rest your shells enough to give them a matte, dried shell (you should be able to “pet” them without getting batter on your fingers– if you bake them before that the shells will crack). And then when they come out of the oven all PURDY and PERFECT because you followed the magical macaron making directions, it’s time to decorate these beauties that you just created!

Luster dust is kind of like the professional makeup of the cookie world.  I don’t use it super often, mainly because it has to be hand-painted on, and it’s also too expensive to use flagrantly.  A teeeeeeeny little container is $5-$10, depending on what brand/color you get.  You might be able to do 2-3 batches of cookies with one container.  So I use it sparingly, for that little kiss of “extra special.”  I tried out 2 different types of luster dust here– Mayan gold

. You can see that the shell on the left is a little darker and richer gold than the shell on the right.  I ended up going with Super gold (shell on the right), so the shells you see in the following photos are of that shade.  You can choose what you like best– I am probably the only one with 4 different shades of gold luster dust (don’t even get me started on my silver collection), but when a gal needs gold she needs it to be JUST right!  Combine a teeny bit of luster dust with some quickly evaporating alcohol, such as vodka.  The alcohol will evaporate and leave the luster dust clinging effortlessly onto your lucky Irish cookies.  🙂 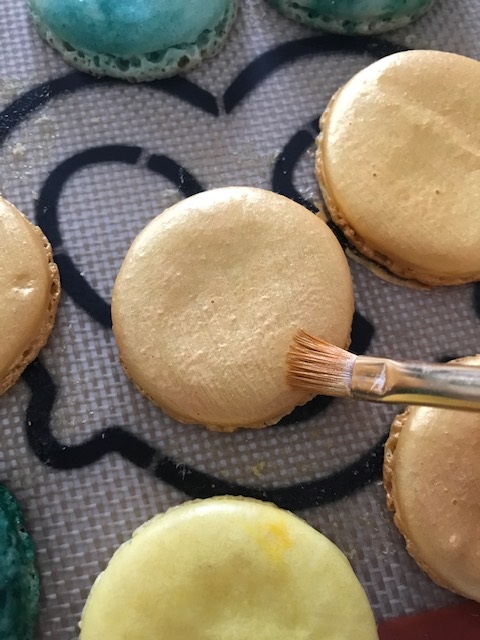 I love playing Queen Midas and making everything that I touch turn into gold. 😉 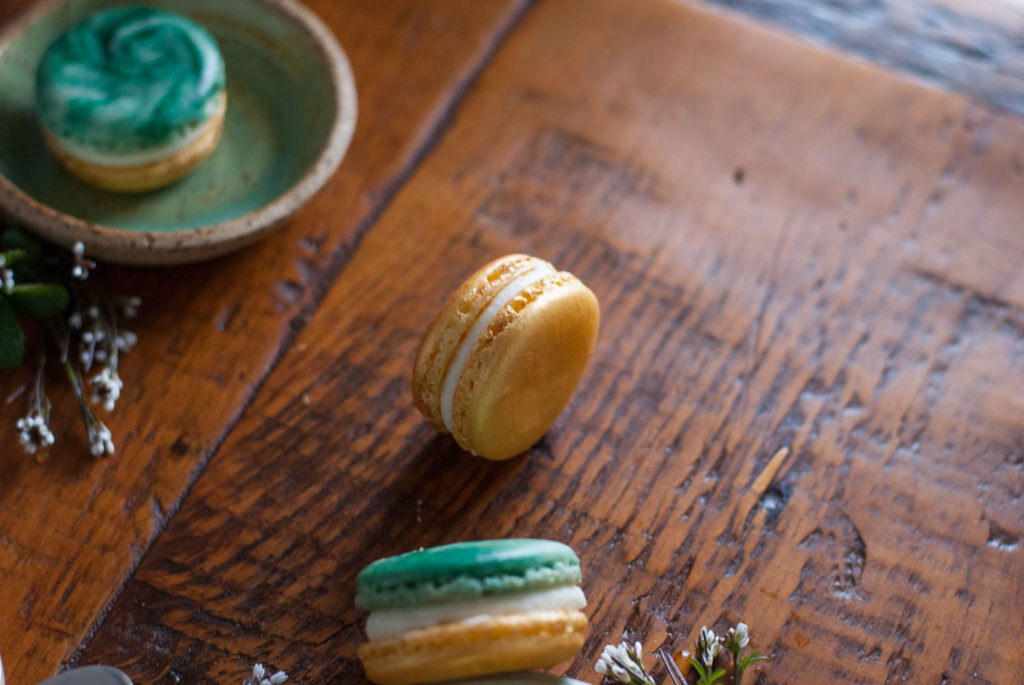 Now THIS is a cookie worth spending some luster dust on!  I think the Irish leprechauns would be proud! Look how adorable it looks– like an edible gold coin.  Love, love, love. 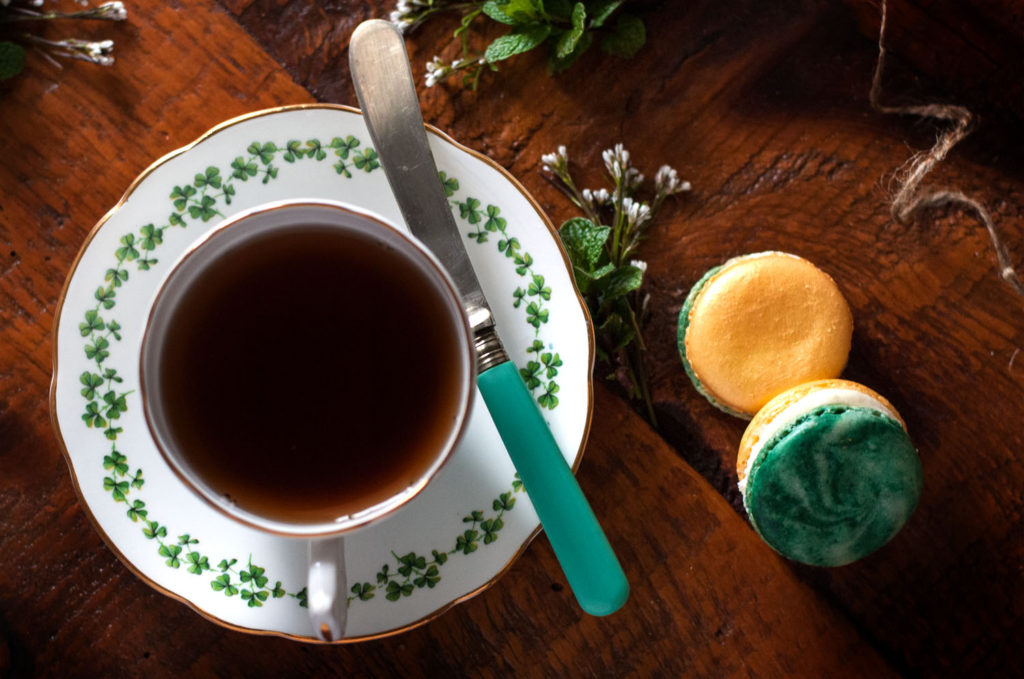 And those BEEEAUTIFUL little green swirls?  Um, it looks like me little cookies were kissed by the very shamrocks, me lovelies! 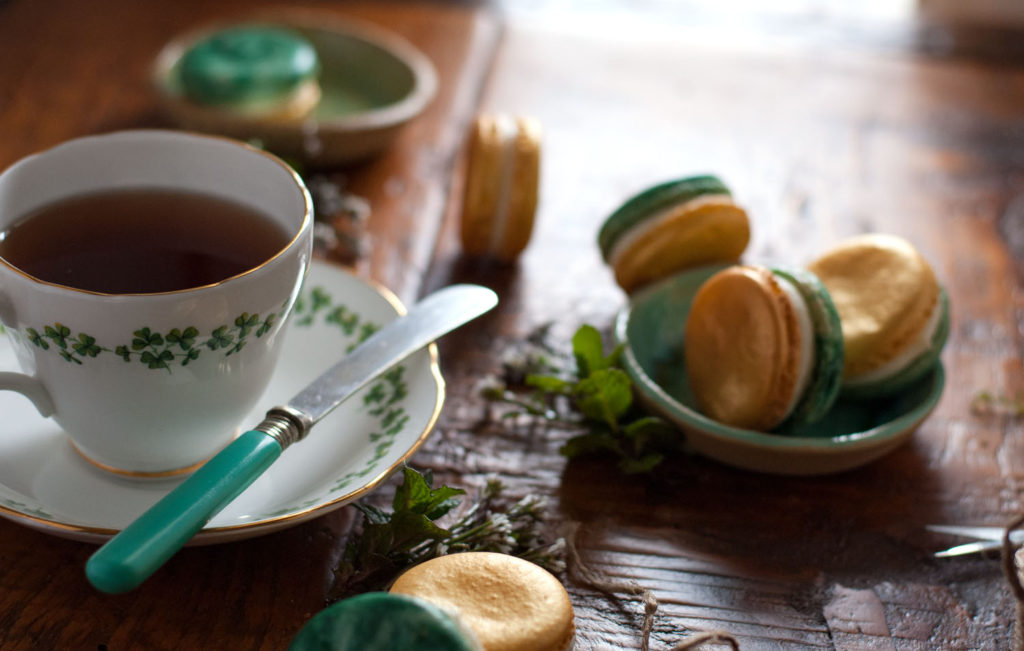 When I had the chance to visit Ireland this past fall, I kept seeing the lush green of the grass and the gold gilt painting on many of the pubs.  No wonder magic seems to reign there.  I think the leprechauns must be a cheeky lot. 🙂  Or maybe they just chose one of the most beautiful places in the world to live.  Or maybe they just like Guinness.  Hmm. 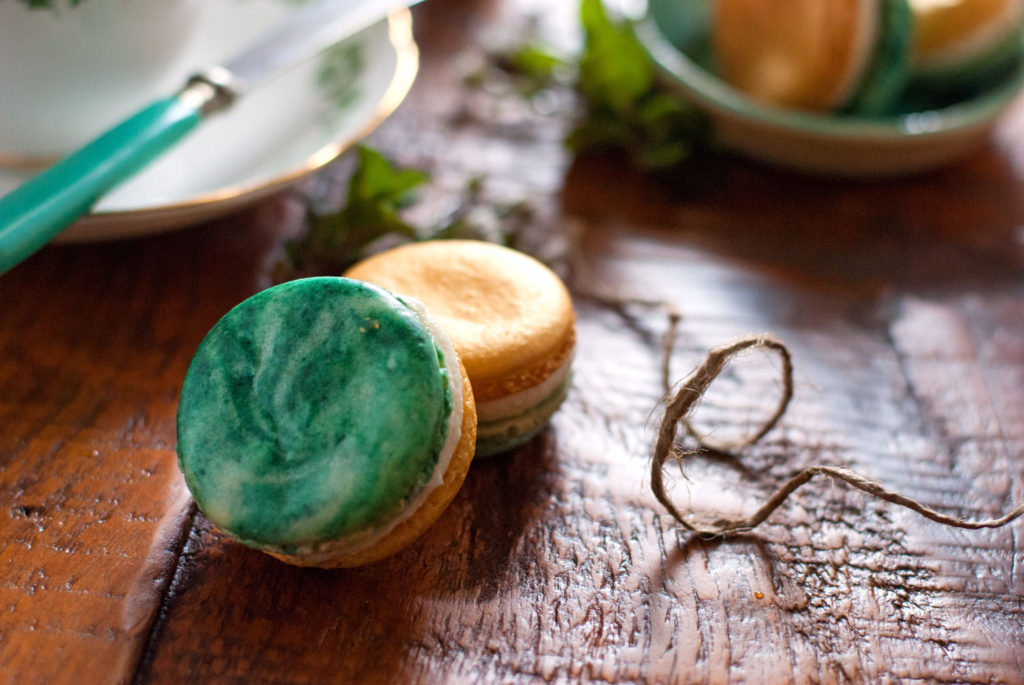 The interesting thing about macarons is that they derive almost all of their flavor from their fillings, rather than their shells.  Very seldom do pastry chefs flavor the actual shells.  The shells and the filling are like a perfect marriage– they kind of bring out the best in each other, and after a little time become one, delicious, crisp, chewy bite. 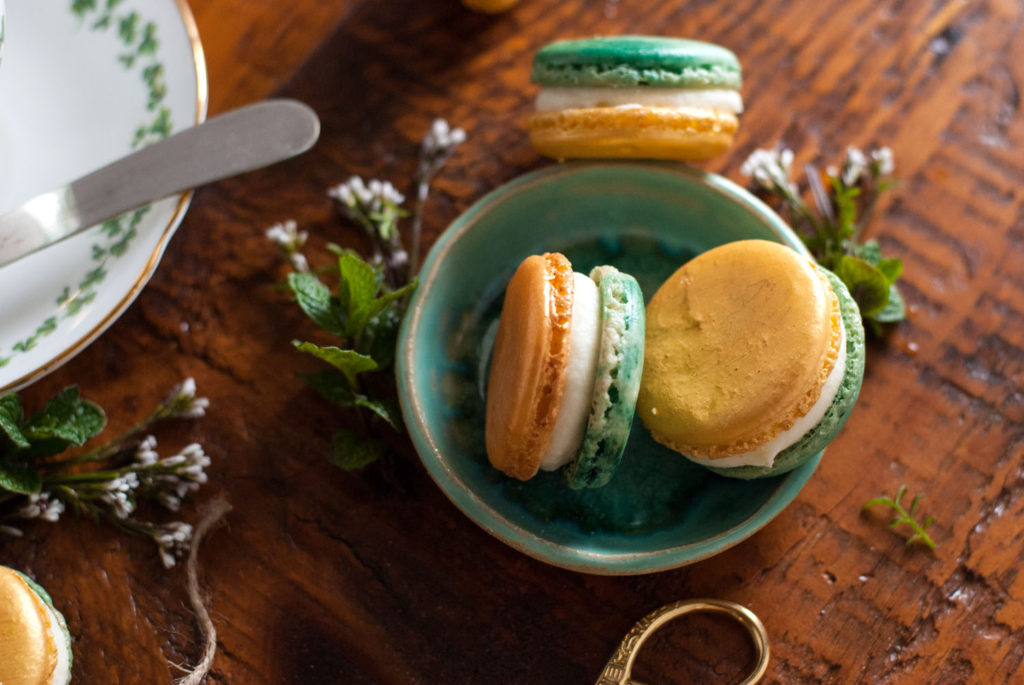 And I can’t speak for all leprechauns, but I think I’d feel pretty lucky if I found cookies as beautiful as this waiting for me at teatime. 😉  Who says that Irish gold can’t be found?  Psssst.  If you can’t find it, just make it.  It’s much easier.  Plus, there are seconds. 🙂